Why Michel Barnier is our European of the Year 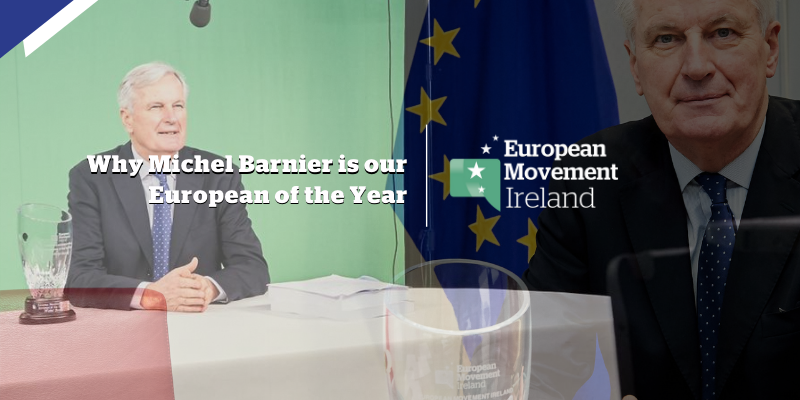 Each year, European Movement Ireland honours an individual who has made an outstanding contribution to the relationship between Ireland and the European Union. Past winners include former Taoisigh, Peter Sutherland, John Hume, Catherine Day and the Irish Defence Forces. Our recipient this year was Michel Barnier, the EU’s lead negotiator throughout the Brexit negotiations.

This was the first time the award has recognised somebody who is not an Irish citizen. We choose Michel Barnier, who described himself to an audience in Dundalk in 2018 as not just “a technocrat from Brussels,” but a French politician who “will never forget what I learnt during that time from small businesses, farmers, the people on the ground.” These words were prescient. They demonstrate that for Barnier, the negotiations were about more than a text or a treaty, they were also about protecting peace, livelihoods and progress on the island of Ireland.

There are three main reasons we decided to honour Michel Barnier.

Firstly, he took the time to understand the Irish position, not just the position of the Government, the possible macro-economic impacts of Brexit or the technicalities of a prospective agreement, all of which he understood very well. He also understood the peace process, what it meant for the lives of people in border counties and on the whole island. As former Commissioner presiding over the PEACE programme in Northern Ireland, a key support to the Good Friday Agreement, he was diligent in meeting young people, community and business groups as well as politicians of different ranks and views. He listened to them and formed connections, demonstrated by the fact he is a household name in this country.

When the Brexit referendum happened, we in Ireland wondered if the EU would understand how exposed we were, the extent to which our interests were at stake.  Barnier understood this. The EU had to stand together if it were to rise to the challenge posed by Brexit. To throw a member state under the bus would have been a fatal error at a time when solidarity was required. So, Ireland’s interests became the EU’s interests. Ireland quickly became one of the three key EU priorities in the negotiation of the Withdrawal Agreement alongside citizens’ rights and the financial settlement.

Secondly, Michel Barnier depoliticised the negotiations on the EU side while negotiating on behalf of all 27 member states. From Sebastian Kurz’s Government in Vienna to Emmanuel Macron’s in Paris to António Costa’s in Lisbon, he was representing governments on the right, in the centre and on the left and did so by adopting a practical, pragmatic and decidedly non-political position. He was guided by the Treaties and not the political currents flowing through Europe. When others on the European side dialled up the rhetoric he largely stuck to the issues. He summed this up neatly to that same audience in Dundalk: “We are seeking practical and operational solutions to a complex problem. No more, no less.” This approach was also a formidable foil to the emotive and overtly political positions of the British negotiators, giving the EU a strong hand when the negotiations entered the detailed technical and legal phases.

Thirdly, he persisted. He and his team persevered until a withdrawal agreement was reached and then again until he had a trade and cooperation agreement. The political and media hostility that sometimes emerged from London had little effect. The British press called him the most dangerous man in Europe. However, the danger they and others in London failed to recognise was his dogged perseverance on the detail. This was a hike and not a sprint. The threats of a no-deal scenario, the overboiled arguments of sovereignty and the countless times when the two sides remained far apart generated a single response – keep going and keep working. When the negotiations of the trade and cooperation agreement looked like they were in trouble just before Christmas it seemed that unity on the EU side was fraying. Member states in the Council were briefing media about their concerns that Michel Barnier would concede too much. But he kept the diverse unity that had characterised the negotiations on the EU side together, working right up until Christmas Eve and getting the deal over the line.

The agreement between the EU and the UK is far from perfect. It was recently pointed out that it is the only trade agreement in history that makes trading more difficult than it was before. We have seen disruption over the last couple of weeks but the alternative was much worse. Importantly we have a foundation upon which the EU and UK can continue to build a future relationship that is mutually beneficial to both sides. Ireland, as a committed EU member state with the closest relationship to the UK, has a role to play in that as a future facilitator in that process.

Michel Barnier and his team faced a reality none of us wanted and made the best of it. He has made a significant contribution to European unity which has held and arguably become stronger in the face of Brexit. He has made an outstanding contribution to the strengthening of connections between Ireland and the EU. It is for these reasons he is European Movement Ireland’s European of the Year.

Our European of the Year Award Ceremony was held on Thursday 21 January 2021. You can watch the event, which featured a keynote address from Michel Barnier and contributions from Taoiseach Micheál Martin TD and Ministers Simon Coveney TD and Thomas Byrne TD, here or read a full transcript of Michel Barnier’s address here.