Housing and the Future of Europe 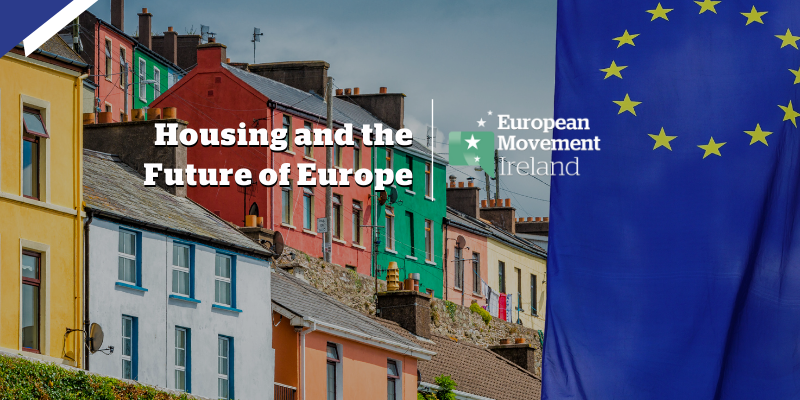 Housing – or the challenges facing young people in accessing affordable housing, is emerging as one of the key issues for the European Union. While the great majority of Europeans live in good quality, affordable housing as a result of major State and private investment since the 1950s, the picture for young Europeans is not so rosy.

Housing as a European Issue

The majority of people aged 18-34 across the EU still live with their parents, largely because they cannot afford to rent or buy. While there are major differences in the housing situation in every Member State, all prosperous European cities face similar challenges, especially those with population growth and inward migration.

The lack of affordable housing particularly impacts on poor and socially excluded people, such as LGBTQI+ young people, lone parents and migrants. Almost 10% of the EU-27 population (and 35% of those who are poor) live in households that spend 40% or more of their disposable income on housing. Homelessness has risen across Europe, although this year, the European institutions, Member State governments and civil society have committed to combatting homelessness under the European Platform on Combatting Homelessness, with a target set for ending homelessness by 2030.

More and more Europeans are looking to the EU to tackle the challenges of our times in such areas as climate change and environmental protection, economic stability, digitalisation of society, data protection, the sharing economy, responsible lending, good jobs, improved quality of life, recognition of diversity, fundamental rights and social inclusion.

Could the EU do more in the field of housing?

It is important to remember that the EU has no direct competences/powers in housing as such – it is unlikely to ever build, sell or rent homes. For example, in relation to owner-occupation or housing as property, Article 345 of the Treaty on the Functioning of the EU states that “This Treaty shall in no way prejudice the rules in Member States governing the system of property ownership.” Of course, Member State constitutional and legal provisions on the regulation of use of property in the public interest are mirrored in the Treaties. But housing is also about more than property, and despite all the differences between national housing systems, there are many common issues facing all Europeans. Some of these are relevant for, and overlap with, EU policies, which have already been approved by Member States.

In many areas which relate to housing, Member States have agreed to share their competences/powers, such as in supervision of mortgage lenders, setting of euro-area interest rates, consumer protection and fundamental rights, and in non-discrimination on gender or other grounds.

Many issues which affect access to, and enjoyment of, housing rights are impacted by the unique architecture of the Economic and Monetary Union. These include the rules on social and affordable housing as a Service of General Economic Interest, and the rules on Member State budget deficits and borrowing levels for investment. Of course, these rules do not in any way prevent Member States from acting to address national housing system deficits. There are proposals to separate investment in social and affordable housing from the rules on general government debt, avoiding State budget deficits.

The EU Green Deal is especially significant for housing investment across Europe. The decarbonisation of the EU economy by 2050 is a common objective in the fight against climate change, and the energy used for heating and cooling buildings is one of its main causes. Through the Green Deal, the European Union set itself the goal of making buildings and housing more energy efficient.

The European Single Market and social market economy of the EU also impact on housing on many levels. But, of course, access to adequate housing is essential for the full participation of every EU citizen in society.

Looking to the Future

All of these issues are up for discussion at the Conference on the Future of Europe Event on Housing, being hosted by NUI Galway on 9 December 2021, in association with European Movement Ireland and The Housing Agency. This EU initiative seeks to open a space for debate to address Europe’s challenges and priorities, and it is important that housing is treated as one of the important issues for Europe’s young (and not so young) citizens.

One of the key questions being addressed by presenters and participants at the NUI Galway Event is “what your ideal Europe would look like in the next 10-20 years?” Of course, this leads to many other questions. Will everyone in Europe be able to access decent and affordable housing? How much will we pay for our homes? Will our housing systems contribute to climate change, or will we have sustainable and energy efficient homes? Will our communities be inclusive of all? Will our housing policies reflect gender equality? Will we have segregation based on income, identity, disability, nationality or connectivity? Will our students and young people be able to access good quality affordable housing if they chose to study or work in another Member State? Will the EU help us ensure that no-one is homeless due to lack of housing? Will our housing systems be defined by boom-bust cycles and unpredictable mortgage interest rates for aspiring homeowners? Will the EU support a minimum standard of housing in line with human dignity for all? Will the human right to home take priority in housing-related policymaking, or will it be something else? What does the commitment in the EU Charter of Fundamental Rights “to ensure a decent existence for all those who lack sufficient resources” really mean? How does the European Pillar of Social Rights actually inform EU policies?

Of course, the answers to these questions will be national, regional and local, as well as European. While the difficulties and angst of trying to solve current housing problems often preclude any opportunity for a free discussion on what we would like to see in 10- 20 years, it is really time to include housing as part of the Europe-wide debate on the Future of Europe. We will develop and share better solutions, working together as Europeans.

[Register for the Conference on the Future of Europe – Housing Event