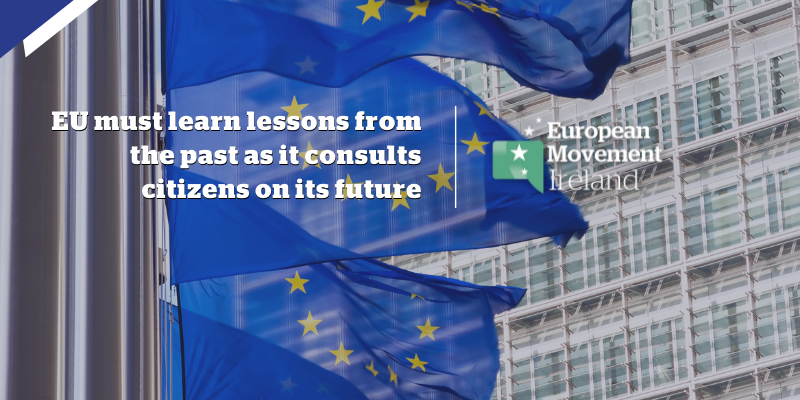 The use of Citizens’ Assemblies in Ireland is increasingly recognised as a highly effective and inclusive way to implement difficult constitutional reform. The State has become an unexpected leader in citizen engagement.

In many parts of the world, governments and public authorities are realising that engaging citizens is crucial to realising major changes.

A Conference on the Future of Europe was launched on May 9th in Strasbourg and the Irish Government held a national launch for the conference last Friday.

Delayed by the Covid-19 pandemic, the EU conference’s aim seems quite simple – to involve citizens in a debate about the EU’s future challenges and priorities. Making this meaningful will be a complex task.

Last month, European Movement Ireland, of which I am CEO, published its annual opinion poll, which found that 84 per cent of people in this country support Ireland’s continued membership of the EU. However, the findings also presented differing views on the role of the EU in specific areas and how much power it should have over our lives. For example, people thought the EU should be doing more on climate change but were sceptical about it having more control over healthcare. These are the types of issues the conference will examine.

The EU is often accused of suffering from a “democratic deficit”, which is another way of saying that citizens do not feel involved in decision-making or they are not consulted enough. The conference is an attempt to partly rectify this, while considering what the EU focuses on and how it should do business.

In our work to engage Irish citizens on European issues, regardless of the issue, we find that although effective citizen engagement may sound easy, it can be difficult to achieve. For citizen engagement to be meaningful, the process must be two-way, that is, the views of citizens must have a tangible impact on decisions that are eventually taken. It is crucial that this determination is demonstrated at the outset to encourage people to take part.

Engagement cannot be decreed; it must be inspired.

The Convention on the Future of Europe in the early 2000s was the last major structural effort to engage on Europe’s future. The outcome of that process was a draft EU constitution that was later rejected by voters in France and the Netherlands before being abandoned in favour of the Lisbon Treaty. That is an important lesson we need to remember as we embark on this latest effort. The previous convention largely failed because it produced a vision of a European future that, for whatever reason, citizens did not identify with.

We can avoid that this time by making sure the diversity of Europe’s citizens is reflected in this conference. That seems simple, but that also is where the challenge lies.

Young people, members of the Traveller community, islanders, the Roma community, minorities, the LGBTQ+ community, those in Northern Ireland who want to be involved, people with disabilities and others all make up the European Union and are part of Europe’s future. For the Conference on the Future of Europe to be a meaningful exercise in citizen engagement with outcomes that reflect our hopes and priorities, it must focus on engaging a diverse representation of all those who live and work in Europe.

This commitment to diversity should be at the core of all those involved in the conference, from the EU institutions to national governments to organisations like European Movement Ireland.

We are working with the Government and Minister of State for European Affairs Thomas Byrne TD on an innovative programme to support what we hope will be a pan-European conversation about the kind of Europe we want to live in.

Specifically, European Movement Ireland will be holding a series of live, online consultations across the country and beyond over the coming months. This process will begin in June and continue into next year. Our approach will be to focus on regionality and diversity. During the first stage we will bring together a cross-section of people in each region and in the second stage bring together groups who have been underrepresented or fall outside the regional formats, for example, people in Northern Ireland or our diaspora. These discussions will be structured around some obvious issues, such as how the EU can support economic recovery or the bloc’s future role in public health. However, the agenda will be open so people can also contribute their own ideas. The outcome of those discussions will be documented and submitted to Government. We expect they will result in concrete recommendations for action at EU level.

We are mindful of the fact that Europe’s demographics are changing and this too must be reflected throughout the process. Our population is getting older, more mobile, more diverse. Young people are going through the second major economic upheaval of their lifetimes; those younger again have been denied the formative years of their lives by an unprecedented pandemic which in turn has highlighted and deepened inequalities.

For us to identify with the EU, we need to see ourselves in Europe – in the people who make up the institutions, in the decisions taken and in the impacts on our daily lives. Solely relying on the old networks that once plotted Europe’s future alone no longer works. If this Conference on the Future of Europe is to be a success it must genuinely engage with Europe’s citizens – all of them.