The End of the Beginning 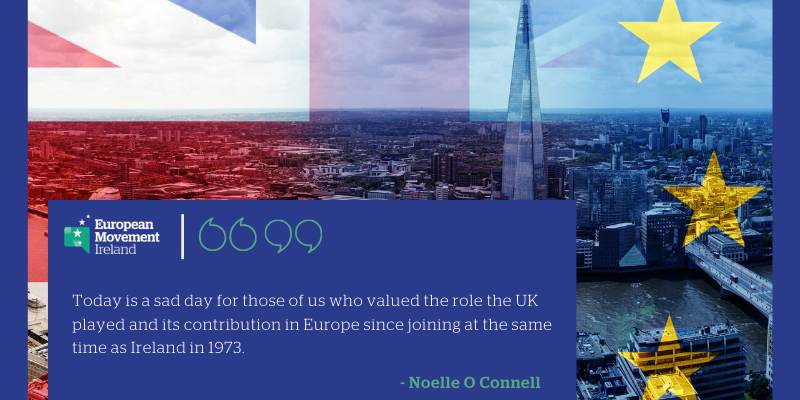 This was the reaction of Winston Churchill to the British victory over German forces in Egypt in November 1942, signalling a major turning point of World War II. Today, 31 January 2020 the United Kingdom leaves the European Union, but Brexit does not end there. The conclusion of the withdrawal phase is only the ‘end of the beginning’.

This is because the UK and the EU enter a transition phase on 1 February, during which little should change in daily life even though the UK will no longer hold EU membership. The EU and UK must now negotiate agreements on their future relationship, covering a range of areas from security to trade.

The EU, including the Irish government, have consistently said they wish to have as close a relationship with the UK as possible after Brexit. The EU has never offered, for example, a quota and tariff-free trade deal to any other country. That offer is conditional, partly to ensure that the UK does not have easier access to the 450-million strong single market than EU members have.

As the EU member with the closest relationship with the UK, a cooperative EU-UK relationship is much more desirable for Ireland than a competitive one. A lot hinges, therefore, on the choices the British government will make this year.

Commenting today, EM Ireland Executive Director, Noelle O Connell said, “Today is a sad day for those of us who valued the role the UK played and its contribution in Europe since joining at the same time as Ireland in 1973.”

While today is only the end of the beginning of Brexit, Winston Churchill would probably have been most impressed with the emergence of such a strong European Movement in the UK. He, after all, was one of the founding fathers of what became the European Movement International (and its British branch) after World War II.

Today is a sad day for all pro-Europeans, but British friends should remember Churchill’s advice to the Congress of Europe in 1948:

“There is only one duty and watchword: Persevere…Persevere along all the main lines that have been made clear and imprinted upon us by the bitter experiences through which we have passed. Persevere towards those objectives which are lighted for us by all the wisdom and inspiration of the past: