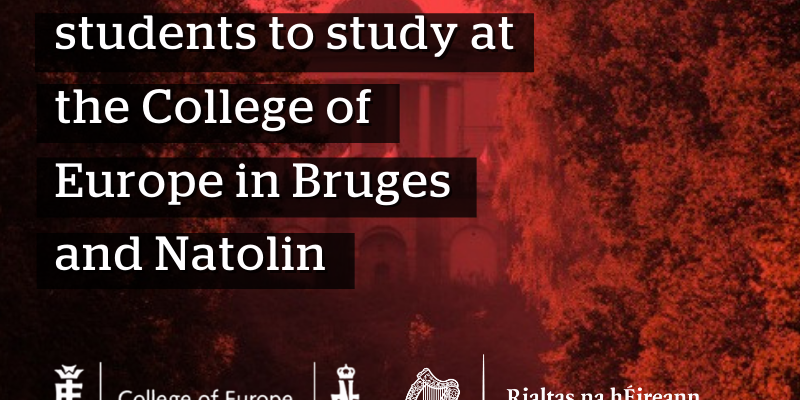 Dublin, 22 October 2021:  European Movement Ireland, on behalf of the Department of Further and Higher Education, Research, Innovation and Science and the Department of Foreign Affairs, is delighted to announce an increase in the number of scholarships available to students applying to the College of Europe from the Government of Ireland. Six scholarships, valued at €26,000 each, will be offered this year to Irish applicants to the College of Europe, the application period for which is now open.

Commenting today, Minister for Further and Higher Education, Research, Innovation & Science Simon Harris TD said “Increasing Irish representation in EU institutions is an important Government strategy. I am delighted to announce that we will increase the number of suitable candidates coming forward from Ireland for EU roles by providing six scholarships to Irish students at the College of Europe.

“There are postgraduate places at the College for Irish students studying politics, law, economics and European studies, among others, and they and offer a great opportunity for graduates to develop their knowledge and skills in a truly international environment.  You can find out more online and I encourage anyone with an interest to apply”.

Minister of State for European Affairs, Thomas Byrne TD, who announced a proposed increase in the number of scholarships as part of the Government’s launch of ‘A Career for EU’, Ireland’s new strategy to increase Irish representation in the EU’s Institutions and Agencies earlier this year, commented, “I’m very pleased that the number of scholarships for Irish students to study at the College of Europe has been doubled to six this year. This increase forms a key part of the Government’s ‘A Career for EU’ strategy, launched earlier this year. This strategy aims to assist Irish people to secure positions within the EU Institutions and agencies and one of its key objectives is to equip Irish candidates with the skills needed to succeed in the EU. These scholarships will lead to more Irish citizens studying at the College of Europe and, in turn, will create a pool of candidates with in-depth knowledge of the EU and greater chances of obtaining positions within the EU Institutions. The mission of the College of Europe is to bring our continent closer together and I am excited by the impact greater numbers of Irish students will have on this goal. Ireland’s long dedication to European integration and our unique perspective on many current issues means that our students will bring valuable insights to the College of Europe and beyond after their graduation.”