EM Ireland meeting with Maroš Šefčovič – Vital to enhance engagement on issues related to the Protocol across Ireland, North and South

“As intensive discussions on the Protocol on Ireland and Northern Ireland continue, we discussed progress with Vice-President Šefčovič, including the vital role played by civil society organisations in supporting and expanding dialogue at all levels.

“We reiterated our support for the package of bespoke arrangements on the Protocol proposed by the Commission in October.

“The commitment to enhance engagement with a wide range stakeholders and authorities is particularly relevant and welcome.

“We agreed that European Movement Ireland would work to engage partners and civil society on these issues and remain in contact with the Vice President regarding progress. I was encouraged by Vice President Šefčovič’s recognition of the vital role played by organisations like EM Ireland and what was a very productive and engaging meeting.” 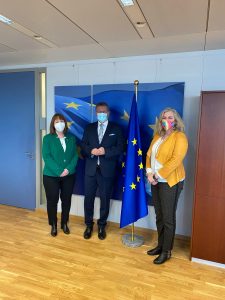