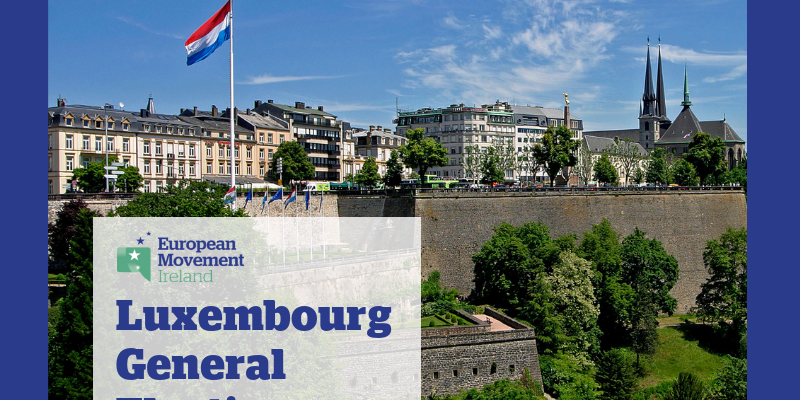 Luxembourg went to the polls on Sunday, 14 October to elect a new Parliament, known as the ‘Chambre des députés’, or Chamber of Deputies.  While the centre-right Christian Social People’s Party (CSV) won the most seats as a single party with 21 seats, the current centre-left coalition government made up of the Democratic Party (DP), the Luxembourg Socialist Workers’ Party (LSAP), and The Greens won a combined 31 seats.  31 seats is the minimum amount of seats required for a majority in government.  On Tuesday evening, the Grand Duke Henri of Luxembourg nominated incumbent Prime Minister and leader of the DP, Xavier Bettel, as ‘formateur’, tasked with establishing the new Cabinet.  Coalition negotiations between the DP, the LSAP, and The Greens are expected to follow in the coming weeks.

The national Parliament of the Grand Duchy of Luxembourg is known as the ‘Chambre des députés’, or Chamber of Deputies and is unicameral, i.e. consisting of one house. It is made up of 60 seats. Deputies are elected every five years from four multi-seat constituencies using a system of proportional representation. For each of the constituencies, political parties draw up a list of candidates, which cannot be more than the number of Deputies to be elected from that constituency. 23 Deputies are elected from the South Constituency, 21 from the Centre Constituency, nine from the North Constituency, and seven from the East Constituency. Voters can cast as many votes as Deputies elected in their constituency and can either give all their votes to the list of one political party or vote across party lists.

A political party or coalition needs to obtain a minimum of 31 seats in order to form a government. No single party has held an absolute majority in the Chamber of Deputies since World War II.

Voting is mandatory in Luxembourg for country nationals, however only 52 per cent of the 602,005 people living in the country are considered nationals and, therefore, eligible to vote. In 2015, a referendum was held on whether to extend voting to non-nationals living in the country for a period of ten years or more, however the proposal was rejected with 78 per cent voting against it.

Issues such as housing and infrastructure featured prominently in this year’s election debate.

With 233,014 ballots cast, turnout for Sunday’s election was 89.7 percent, down 1.6 per cent from 2013. Of the 10 political parties contesting the 2018 election, only seven received enough votes to take up seats in Parliament. The distribution of seats for the successful political parties is listed in the table below:

The coalition government of 2013-2018 was made up of the Democratic Party (DP), the Luxembourg Socialist Workers’ Party (LSAP) and The Greens. The first tri-partite coalition in Luxembourg’s history, it is known as the ‘Gambia coalition’ due to the combination of political party colours of the three members. The Gambia coalition won a combined 31 seats in Sunday’s election, the minimum amount needed for a majority. The DP and the LSAP suffered losses, down one and three seats from 2013 respectively; while The Greens won an extra three seats.

The centre-right Christian Social People’s Party (CSV) is traditionally the largest party in the Chamber of Deputies, having won the largest number of seats in every parliamentary election since World War II, and has led all but two of the country’s post-war governments. The CSV was previously led by current European Commission President, Jean-Claude Juncker, who served as Prime Minister of Luxembourg from 1995-2013.

With 28.3 per cent of the vote, the CSV received the largest number of votes as a single party in Sunday’s election and won 21 seats. President of the CSV, Claude Wiseler, ruled out prior to the election forming a coalition with the right-wing party, the ADR (Alternative Democratic Reform). However, he also stated that he would not “have any problems” forming a coalition with “any ‘Gambia’ party”, meaning the DP, the LSAP or The Greens.

On Monday evening, the Head of State, the Grand Duke Henri of Luxembourg declared Ms Martine Solovieff, Luxembourg Attorney General, as his ‘informatrice’ to facilitate coalition talks between political parties and report back to the Grand Duke.

Following a meeting with Ms Solovieff on Tuesday, the Grand Duke nominated DP leader and incumbent Prime Minister, Xavier Bettel, as formateur; the presumed future Prime Minister, tasked with establishing the new Cabinet. The DP, the LSAP and The Greens had all agreed to enter three-way negotiations for a second coalition government.

Mr Bettel declared his satisfaction with the election results, stating: “The electorate has moved things around internally in the government, but the voters have confirmed us.” Negotiations between the three coalition parties are expected to follow in the coming weeks to nominate the new Cabinet.