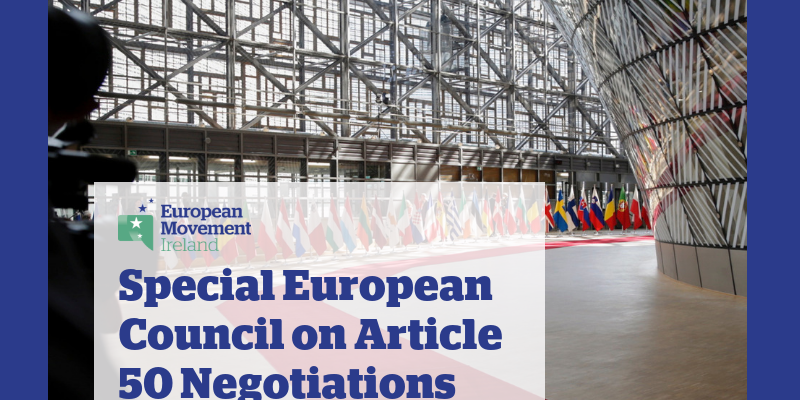 On Saturday 29 April 2017, the EU27 leaders met in Brussels for a Special European Council where they adopted guidelines for the Article 50 negotiations on the withdrawal of the UK from the EU.  The guidelines outline the framework for the negotiations, setting out the broad EU principles for the talks, which will be conducted by the European Commission as nominated by the Council.

At the Special European Council meeting in Brussels on Saturday 29 April, the leaders of the 27 EU Member States, not including the UK, reiterated that they will act as one in the Article 50 negotiations.  German Chancellor, Angela Merkel, ahead of the meeting, said that due to the “multitude of special interests” it was important that this position was maintained, citing EU unity on the unique circumstances on the island of Ireland as a beneficial example of this.

The negotiating guidelines, adopted by the EU27 leaders, state that the integrity of the EU Single Market must be preserved, declaring that the four freedoms – the freedom of movement of people, goods, services and capital – are indivisible and that there can be no “cherry-picking” of the benefits of membership.

The European Council’s guidelines also lay out the wish of the 27 leaders to “establish a close partnership between the Union and the United Kingdom after its departure”, while specifying that a non-member of the Union, a ‘third country’, cannot enjoy equivalent rights and benefits as EU Member States.

In the invitation letter to the Special European Council sent to the EU27 leaders, the European Council President, Donald Tusk, called for a phased approach to the negotiations, whereby the EU would not discuss a deal on the future relationship between the EU and UK before “sufficient progress” had been made on the main issues relating to the UK’s withdrawal.  President Tusk wrote that this approach was “not only a matter of tactics, but – given the limited time frame we have to conclude the talks – it is the only possible approach”.  He added: “In other words, before discussing our future, we must first sort out our past”.

The European Council guidelines state that the first phase of negotiations should aim to “settle the disentanglement” of the UK from the EU, “in accordance with the principle that nothing is agreed until everything is agreed”.  The guidelines also affirm that the first phase should “provide as much clarity and legal certainty as possible to citizens, businesses, stakeholders and international partners”.

In his invitation letter, President Tusk wrote that “people, money and Ireland must come first” in the negotiations, stressing that resolving these issues in the first phase of negotiations will be key to an “orderly withdrawal”.

The European Council guidelines highlight the priority of first reaching reciprocal guarantees to safeguard the rights of citizens affected by Brexit.  The need to avoid a legal vacuum for business once EU Treaties cease to apply to the UK was also emphasised.

The EU leaders laid out in the negotiating guidelines that: “A single financial settlement…should ensure that the Union and the United Kingdom both respect the obligations resulting from the whole period of the UK membership in the Union.  The settlement should cover all commitments as well as liabilities, including contingent liabilities.”

Addressing Ireland’s unique circumstances, the guidelines state that the EU leaders will continue to support the Good Friday Agreement and that protecting “the achievements, benefits and commitments of the Peace Process will remain of paramount importance.”  The guidelines affirm “the aim of avoiding a hard border, while respecting the integrity of the Union legal order”.

The adopted negotiating guidelines also make reference to Ireland and the UK’s bilateral arrangements, declaring: “The Union should also recognise existing bilateral agreements and arrangements between the United Kingdom and Ireland which are compatible with EU law”.

The General Affairs Council, which is mainly made up of the European Affairs Ministers from the EU Member States, will meet on 22 May 2017.  It is due to adopt more detailed negotiating directives for the European Commission and authorise the formal opening of the Article 50 negotiations.  The European Council negotiating guidelines state that it “will update these guidelines in the course of the negotiations as necessary”.

Finally, the guidelines make clear that “while the United Kingdom is still a member, all ongoing EU business must continue to proceed as smoothly as possible at 28 [Member States].  The European Council remains committed to drive forward with ambition the priorities the Union has set itself.  Negotiations with the United Kingdom will be kept separate from ongoing Union business, and shall not interfere with its progress.”