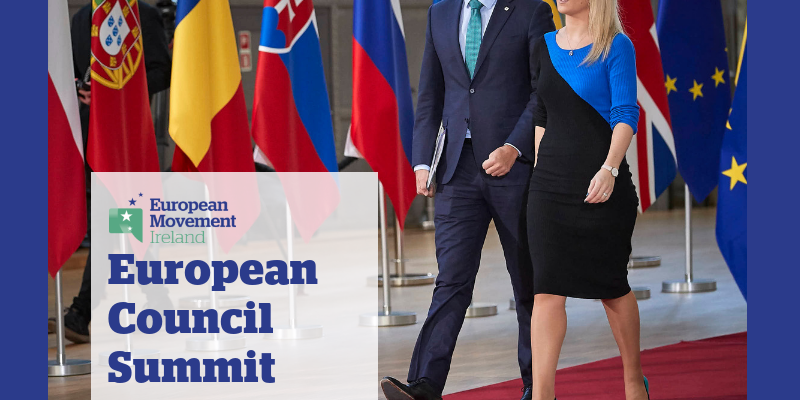 EU leaders met in Brussels on 13-14 December for the final European Council Summit of the year to discuss a wide range of issues including: the Multiannual Financial Framework; the Single Market; migration; and external relations.  On Thursday, EU leaders met in EU27 format to discuss Brexit, following an address given by UK Prime Minister, Theresa May.  On Friday, 14 December, EU leaders met for a Euro Summit to discuss the deepening of the Economic and Monetary Union.

On Thursday, 13 December, UK Prime Minister, Theresa May addressed her fellow EU leaders on the state of play of Brexit.  The UK House of Commons had been scheduled to have a ‘meaningful vote’ on the EU Withdrawal Agreement on Tuesday, 11 December.  However, Prime Minister May announced on Monday the ‘meaningful vote’ would be postponed until further notice, so that she could return to Brussels to seek “further assurances” from fellow EU leaders on the issue of the ‘backstop’, amidst concerns the deal would be voted down in the House of Commons.

After dinner on Thursday evening, EU27 leaders met in Article 50 format without the UK to adopt conclusions on Brexit.  The conclusions emphasised that the Withdrawal Agreement reached on 25 November could not be renegotiated.  They stated that if the backstop ever has to be triggered, the EU will “use its best endeavours to negotiate and conclude expeditiously a subsequent agreement that would replace the backstop”.

EU leaders also called for the intensification of work on preparations for the impact of the UK’s departure, “taking into account all possible outcomes”.

On Thursday, the European Council discussed the Multiannual Financial Framework (MFF), the EU’s long-term budget.  In his invitation letter to EU leaders, European Council President, Donald Tusk, stated that work on the 2021-2027 MFF proposal had “progressed speedily” in recent months, and proposed that a deal should aim to be reached by autumn 2019.

In their conclusions, EU leaders confirmed that they would like to see an agreement reached on the MFF by autumn 2019, and called on the incoming Presidency of the Council of the EU to “develop an orientation for the next stage of the negotiations”.  Romania will take over the rotating Council of the EU from Austria on 1 January 2019.

EM Ireland has published an explainer on the MFF here.

On Thursday, EU leaders discussed a number of issues related to external relations and foreign policy, including preparations for the EU-League of Arab States Summit which will take place 24-25 February 2019 in Sharm-el-Sheikh, Egypt.

French President, Emmanuel Macron and German Chancellor, Angela Merkel presented on the state of play of the Minsk Agreements signed by Ukraine and Russia in 2014 and 2015, brokered by France and Germany.  On Thursday, EU leaders decided to extend economic sanctions against Russia due to the lack of progress made in the implementation of these agreements.

In their conclusions, EU leaders welcomed the European Parliament positive vote on the EU-Japan Economic Partnership Agreement, stating that the European Council “looks forward to its imminent entry into force”.

On Friday, EU leaders discussed the agenda for the EU Single Market.  In their conclusions, EU leaders invited the European Parliament and the Council of the EU to agree on “as many of the pending proposals relevant for the Single Market as possible” before the end of their mandate in 2019.

The European Council also committed to holding an “in-depth discussion” on the Single Market and European digital policy next spring.

The European Council discussed its approach to migration on Friday, adopting conclusions with regards to external and internal policies.  Regarding external policies, EU leaders called for continued effort in “the control of borders”, “the fight against smugglers”, and cooperation with third (non-EU) countries.

Focusing on internal policies, EU leaders invited the European Parliament and the Council of the EU to “rapidly conclude negotiations on the European Border and Coast Guard”.  They also called for the conclusion of negotiations relating to all aspects of the Common European Asylum System.

On Friday, EU leaders met for a Euro Summit to discuss the Eurogroup report on the deepening of the Economic and Monetary Union (EMU).  EU leaders endorsed all elements of the report, and mandated the Eurogroup to work on the development of a budget for the Eurozone in the context of the MFF, “for convergence and competitiveness of the euro area”.

EU leaders also adopted conclusions relating to: climate change; security and defence; disinformation; the fight against racism and xenophobia; and citizens’ consultations.  In their conclusions, EU leaders welcomed the Citizens’ Dialogues that have been ongoing across Member States, describing them as “an unprecedented opportunity to engage with European citizens”.

EU leaders are due to meet again next for a European Council Summit in Brussels on 21-22 March 2019.