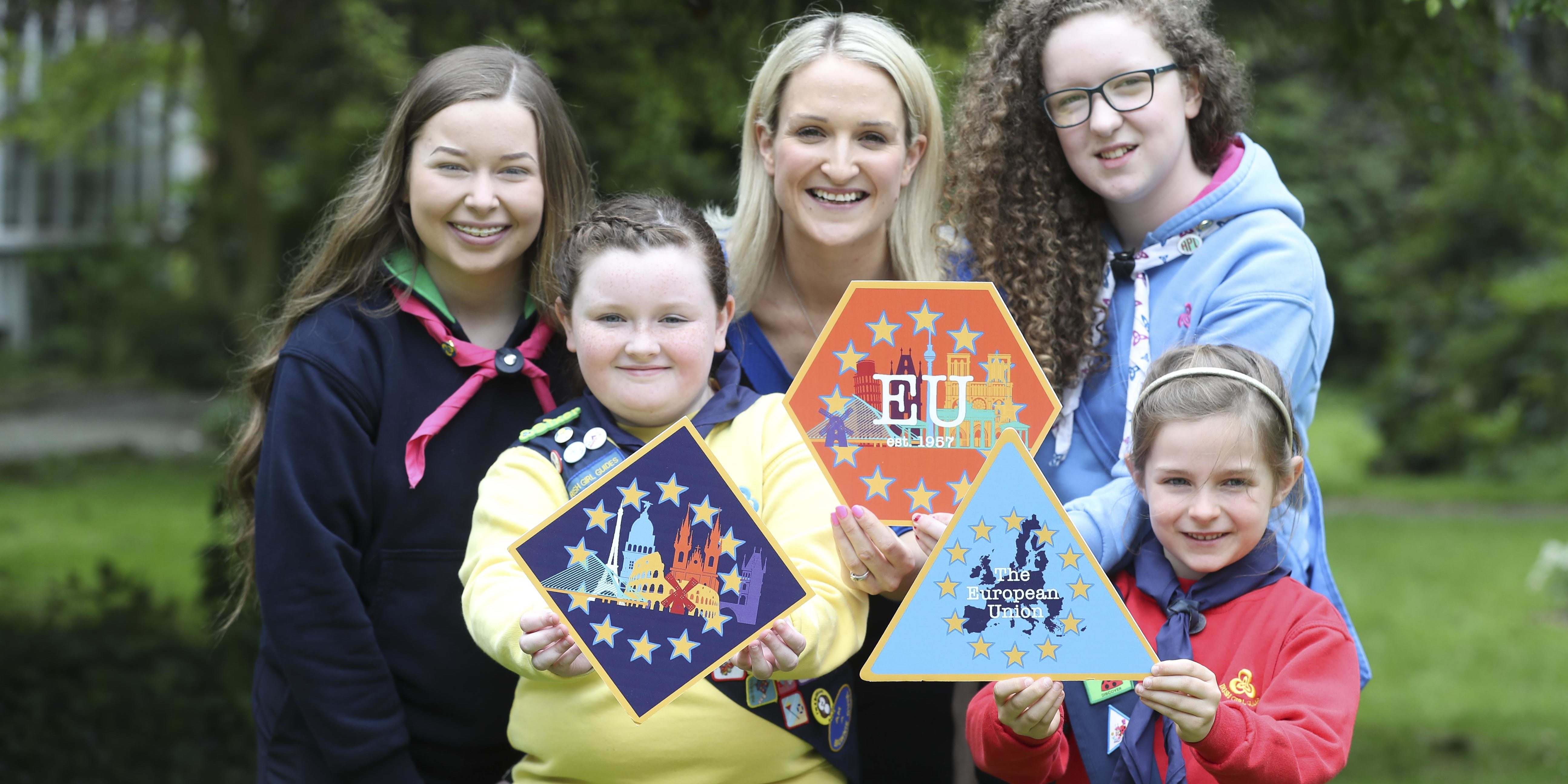 Members of Irish Girl Guides are set to broaden their horizons following the launch today of three Europe badges by Minister of State for European Affairs Helen McEntee TD.

The badges, which have been developed by Irish Girl Guides (IGG) in partnership with European Movement Ireland (EMI), will help girls from age five upwards gain an understanding of the European Union (EU) and how it affects the lives of Irish citizens.

The badges were launched at an EMI ‘Handshake for Europe’ event held in Iveagh House, the headquarters of the Department of Foreign Affairs and Trade, ahead of Europe Day (9 May).

There is a different badge and curriculum for each age group. In order to earn the badge, the youngest members of Irish Girl Guides (Ladybirds aged 5-7) will learn to recognise the European Union (EU) flag, learn greeting customs from three other EU countries and find out about the European Missing Children hotline.

Brownies (aged 7-10) will discover which countries are members of the EU, learn about the role of MEPs and, through a variety of activities, identify ways of respecting and including different cultures. They will discover who their local MEPs are and will write letters to them.

Guides (aged 10-14) will learn why the EU was formed in 1957, when Ireland joined (1973) and the advantages of being an EU member. They will make posters illustrating why Ireland is a member, will celebrate an international cultural festival (e.g. host a Eurovision-style talent competition) and invite a politician to come and talk to them about the EU.

Launching the badge, Minister Helen McEntee said: “This is a fantastic initiative that I am delighted to launch today.  The initiative developed by the Irish Girl Guides and European Movement Ireland is yet another way to promote, learn and understand the workings of the European Union.  It is vitally important to educate our young people about the why the EU exists in a way that engages them and encourages them to want to learn more.

“This is a timely launch ahead of Europe Day.  A day that I will be travelling to Sibiu in Romania with the Taoiseach to outline Ireland’s position on the Future of Europe.  This follows from our Citizens’ Dialogue process that was conducted last year and will help to shape the Future of Europe for all of our citizens.”

IGG Chief Commissioner, Helen Concannon, said: “The Irish Girl Guides has always been a movement of young people, responding to the needs of our global society. In recent times, our news channels have been filled with talk of Europe, the EU and potential leavers. As a responsive organisation, it made sense for us to enter a partnership with another non-governmental organisation to enhance the girls’ understanding of the relationship between Ireland and Europe.

“It has been a pleasure to work with European Movement Ireland to develop the three Europe badges. We were delighted that both organisations have a joint advocate in Jillian van Turnhout who worked with our National Programme and Training Commissioner, Jenny Gannon, and our branch committees to ensure the Europe badges become permanent fixtures in our educational Journey Programme for over 10,000 girls and young women.”

Jillian van Turnhout, Vice Chair of European Movement Ireland and former Chief Commissioner of Irish Girl Guides, said: “The Irish Girl Guides empowers girls and young women to be leaders. The introduction of a Europe Badge will give members an opportunity to develop their knowledge of the European Union equipping them to engage and shape the European project.”

Noelle O’Connell, Executive Director of European Movement Ireland, said: “European Movement Ireland is delighted to be partnering with the Irish Girl Guides in developing a range of ‘Europe,’ badges that we hope will inspire the over 10,000 girls and 1,800 young women leaders to both learn and indeed, shape Ireland’s relationship with Europe.  The Irish Girl Guides have a long and established track record of empowering young women on a range of education and learning programmes. As the National Implementation body for the Blue Star programme which itself has over 1000 primary schools and 90,000 pupils getting creative and learning about Europe. As an organisation founded to develop the connection between Ireland and Europe – EM Ireland is delighted to be partnering with the Girl Guides on this exciting and timely new project at a crucial time in Ireland’s EU relationship.”

Irish Girl Guides welcomes members from age 5+ and volunteer Leaders from age 18+. To find out more, see www.irishgirlguides.ie or tel: 01 6683898.