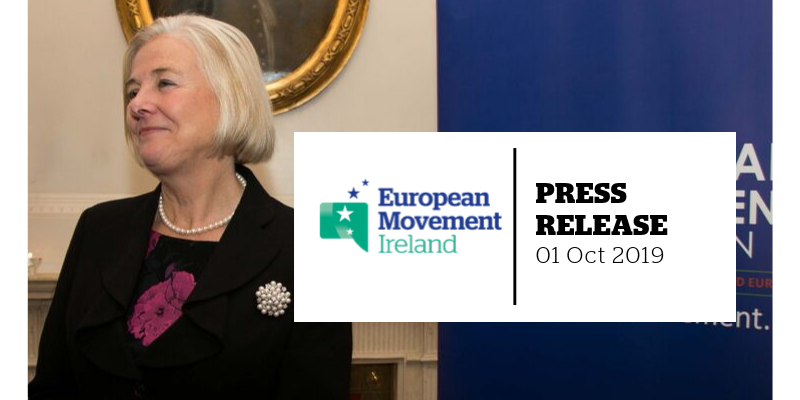 European Movement (EM) Ireland extends sincerest congratulations to its Honorary President, Catherine Day, on the announcement today of her appointment as incoming Chairperson of the Citizens’ Assembly on Gender Equality.

Mr Maurice Pratt, Chairman of EM Ireland, commenting on Ms. Day’s appointment said: ‘I would like to congratulate Catherine Day as she assumes the role of Chairperson of the Citizens’ Assembly on Gender Equality. I have no doubt Catherine will bring all of her considerable skills, knowledge and expertise to bear in this crucial role and indeed, on such a vital issue. On behalf of European Movement Ireland, I wish her every success in her endeavours in the months ahead.’

In congratulating Catherine Day on her appointment, Noelle O Connell, Executive Director of EM Ireland concluded: ‘A significant part of the work of EM Ireland for over 65 years has been engaging people throughout the country on a number of key topics, in particular, Ireland’s relationship with Europe. Through a series of national Citizens’ Dialogues, we have experienced first-hand both the importance and benefit of public participation and deliberative democracy on matters of significant national importance.’ Ms O Connell continued by saying ‘Throughout her long and distinguished career, Catherine has been an unwavering advocate for greater public debate and civic engagement. I would like to congratulate Catherine on her appointment and wish her every success with the Citizens’ Assembly.’

EM Ireland’s Executive Director, Noelle O Connell is available for interview and comment. Contact Lisa Nic an Bhreithimh as above.