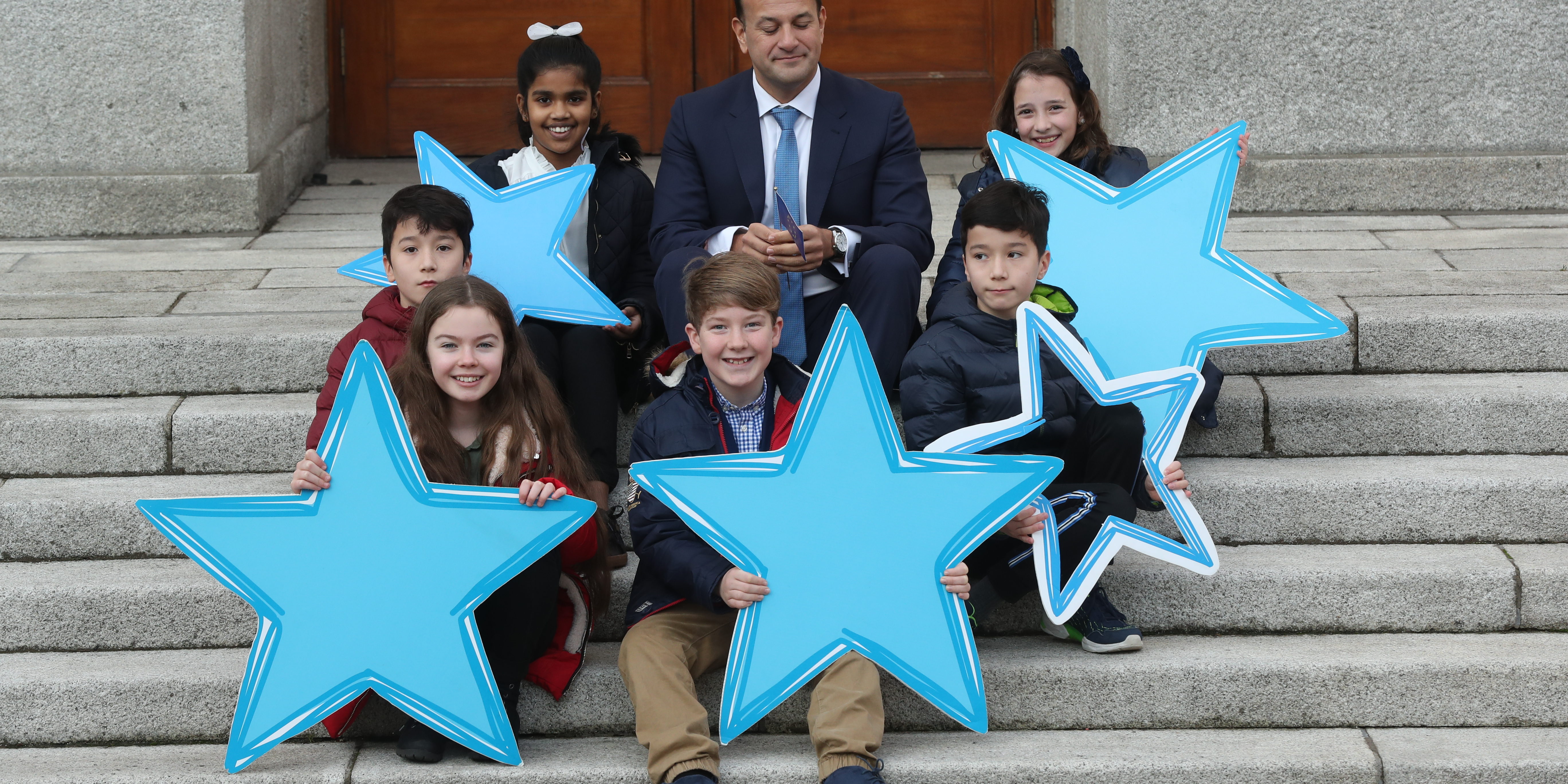 Thursday, 22 November 2018: Fifth class children from Castleknock Educate Together National School paid a visit to Government Building this morning (22/11/18) for the national launch of the 2018/2019 Blue Star Programme. The children were joined by Taoiseach Leo Varadkar; Minister of State for European Affairs, Helen McEntee, TD; Gerry Kiely, Head of Representation of the European Commission Representation in Ireland; James Temple-Smithson, Head of the European Parliament Information Office in Ireland; and European Movement Ireland Chair, Maurice Pratt, and Executive Director, Noelle O Connell, to kick off the eighth year of the programme.

Taoiseach Leo Varadkar TD said: “I am pleased to launch the eighth year of the Blue Star Programme, which helps children to understand how the EU works and how it affects their lives. It’s a great way for young people to learn about what it means to be European, as well as being an Irish citizen. Initiatives such as the Blue Star Programme are more important than ever at a time of Brexit and other challenges facing the EU. The programme gives young people not just an understanding, but an appreciation of the benefits of EU membership, which is something I hope will stay with them as they progress through their lives.”

The Blue Star Programme, implemented by European Movement Ireland (EM Ireland), allows primary school pupils across the country to learn about Europe and the EU through creative activities and projects which complement the national curriculum. The Programme is designed so that it can fit in with lesson plans already in place.  Pupils carry out projects suitable for their age group on the History; Geography; Culture and Creativity; and Institutions of the EU.

Speaking at the launch, Minister of State for European Affairs, Helen McEntee TD said: “The Blue Star Programme helps children, their teachers, parents and families to learn about the EU through history, geography, art and music. As well as teaching children about the EU, it shows them that they are part of a European family. This is especially important for the many children with non-Irish backgrounds as it gives them a chance to tell their classmates about the countries they’re from and to have their heritages celebrated.

“As Minister for European Affairs I am delighted to support this programme and have seen at first hand the enthusiasm that our young people are bringing to the EU. I want to commend the work of European Movement Ireland who manage this excellent programme and I look forward to visiting some schools that are participating in the programme this year.”

Noelle O Connell of EM Ireland said: “We are always very impressed by the imagination and innovation of both the participating teachers and the pupils.  Classes have written and acted out plays, made traditional food from all over Europe, and talked to relatives in other EU countries over Skype.  One class even recreated the painting of the Sistine Chapel by painting the underneath of their desks!

“All primary schools are eligible to register for the programme and we provide lots of material, advice and a curriculum guide,” added Ms O Connell.

The Blue Star Programme is a venture of the Communicating Europe Initiative, supported by the Office of the Minister of State for European Affairs, the Department of Foreign Affairs and Trade, the Department of Education and Skills, the European Commission Representation in Ireland and the European Parliament Information Office in Ireland.  European Movement Ireland is the National Implementation Body.  Since the Programme began in 2011, there has been nearly 1,000 primary school registrations, covering all 26 counties, with approximately 90,000 pupils having taken part.