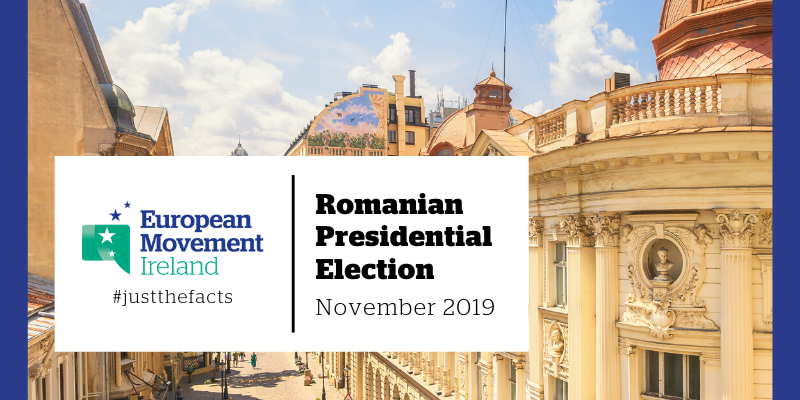 EM Ireland will be inviting guest contributions from Ireland’s leading academics as part of our Just the Facts series, topic dependent, where we are delighted that Prof. John O Brennan is the first of our contributions in this series on the Romanian presidential election.

Introduction: What is the President of Romania?

Under Romania’s semi-presidential system, the president is specifically responsible for foreign affairs, representing Romania at EU summits and at the UN. The president is also the military’s commander-in-chief. Domestically their powers are more limited, but they can call referenda and appoint the prime minister. They are regarded as a mediator between the centres of power in the state and between state and society.

From an initially crowded field of 14 candidates, the two that faced off in the election’s second round were Klaus Iohannis and Viorica Dăncilă. Iohannis is the former leader of the centre-right National Liberal Party (PNL), who sit in the European People’s Party in the European Parliament, along with Fine Gael. Dăncilă is from the Social Democratic Party (PSD), which is a member of the Socialists and Democrats grouping in the European Parliament, where Labour also sit. Romania is currently ruled by a PNL caretaker government under Ludovic Orban, which took power on November 4 after Dăncilă lost a vote of no confidence.

The election took place against the background of the declining influence of the once dominant PSD, which is seen as the successor of the pre-1989 communist elite. It has contested the second round of every presidential election since the fall of communism and won the most recent general election in 2016 with 46% of the vote. However, the PSD has faced stern challenges to maintain its vote share, such as public dissatisfaction with policies that have contributed to the largest protests since the fall of communism.

Since early 2017, a series of significant protests have taken place across Romania, which have centred on the PSD’s attempts to revamp the judiciary in a way that, according to critics, would increase state control over judges and related state agencies. Speaking to EM Ireland, Professor John O’ Brennan said that the “Romanian people very much understand what the PSD were trying to do, in reversing the anti-corruption legislation that the previous government had introduced.”

Throughout the campaign, Iohannis has presented himself as a pro-EU liberal and a trustworthy leader in the fight against corruption. He was vocal in his criticism of the PSD government, and strongly supported a referendum in May this year asking if the current ban that prevented the government issuing pardons and amnesties in corruption cases should be retained. The resounding “yes” that was delivered by 85% by those who voted was a direct response to the PSD. This had a spill-over effect on the PSD’s performance in the European Parliament elections, that were also held that day, which saw their vote share drop to 22%.

Results: The Role of the Diaspora

In the second-round run-off of the presidential elections, Iohannis beat Dăncilă by 65.1% to 34.9% on a turnout of 55.1%. In his victory speech, Iohannis promised “to be a president for all Romanians” and argued that “a modern, European, normal Romania won today.” It is expected that he will now restart efforts to tackle corruption through the appointment of new prosecutors. Prof. O’ Brennan believes he will be aided in this goal by the fact that “it’s the first time in a very long time that we have (political party) alignment between the president and the government. This should make things easier, politically, as previously with the PSD there was stasis.”

Central to this election has been the influence of the Romanian diaspora. Prof. O’ Brennan noted that the “outsized importance of the diaspora” was one of the major talking points of the election, saying that the “demographic issue is very much reflected in the election result.” These are primarily younger and more educated Romanians, that predominantly favour liberal pro-EU candidates. They have proven decisive in previous election, and continued to do so on Sunday, where a record number of 944,077 votes were counted, with 94% going to Iohannis. According to Eurostat, the number of Romanians of working age (16 – 64) living abroad within the EU, accounted for 2.5 million (21%) of the total population of 19.5 million.

With the Irish government proposing a referendum on extending the presidential election franchise to the 3.6 million citizens living abroad, the role of Romania’s diaspora is widely recognised. Despite this, Prof. O’Brennan cautions against drawing too close a comparison. The “Irish diaspora is bigger, due to many waves of outward migration, while Romania’s is much more recent and concentrated.”

While Prof. O’ Brennan argues that the election result does not represent a sea-change, pointing out that corruption is not confined to the PSD, he suggests that the protests and the re-election of Iohannis indicate that increasingly, the “Romanian people are prepared to stand up for stability in Romanian politics.”

Prof. John O’ Brennan is Jean Monnet Chair in European integration and is the director of the Maynooth Centre for European and Eurasian Studies. His work focuses on European Union institutions and politics, and, specifically on the process and politics of the EU’s Enlargement policy.