You are here:
Just The FactsUncategorized 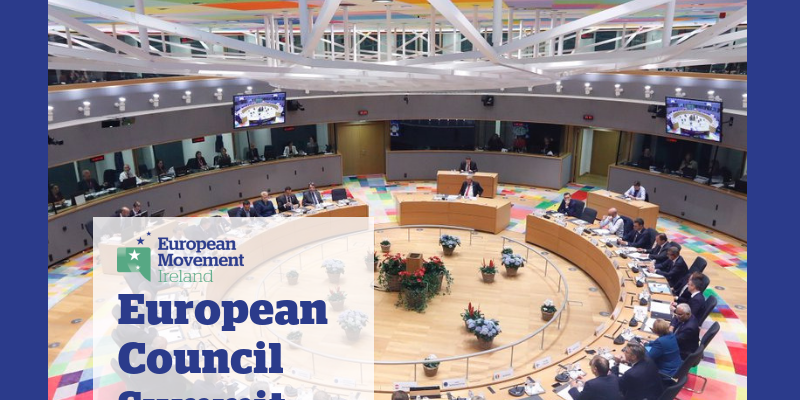 On Thursday, 18 October, the European Council met in Brussels to discuss migration, internal security and external relations.  Following the morning session, EU27 leaders held a Euro Summit to discuss the deepening of the Economic and Monetary Union.  EU leaders had previously met in EU27 format on Wednesday, 17 October over a working dinner to discuss the state of play of the Brexit negotiations.

In their conclusions, EU leaders recognised the progress made in stemming illegal migration since its peak in 2015, but also called for an increased effort in combatting people-smuggling networks, as well as “strengthening cooperation with countries of origin and transit”.  To ensure progress in this regard, EU leaders invited the Council of Ministers, with support from the European Commission, “to develop a comprehensive and operational set of measures” by December 2018.  EU leaders also invited the European Parliament and the Council of Ministers to investigate, “as a matter of priority”, recent European Commission proposals on migration.

On Thursday, 28 October, the European Council discussed issues surrounding internal security, namely strengthening cyber security and combatting terrorism.  While recognising that “real progress” had been made, EU leaders called for increased measures to strengthen the EU’s internal security.  These included exploring measures to “strengthen the capacity to prevent and respond effectively to radicalisation and terrorism”, and examining measures to combat the spread of disinformation in election campaigns.

EU leaders also condemned the cyber-attack carried out against the Organisation for the Prohibition of Chemical Weapons, whose headquarters are located in the Netherlands.

In the closing press conference, President Tusk called on the Council of Ministers to develop a sanctions regime specifically dealing with cyber-attacks, in order to protect “citizens, companies and institutions from all kinds of cyber security threats”.

EU leaders also discussed external relations during Thursday’s meeting.  In their conclusions they welcomed EU cooperation with Africa, such as the European Commission’s proposal for a new Africa-Europe Alliance for Sustainable Investment and Jobs.  In their conclusions, EU leaders stated relations between the two continents are of “paramount importance” and should be taken to a “new level”.  They also welcomed the first EU-Arab League Summit which is to take place in Egypt in February 2019.

EU leaders recognised in their conclusions the findings of the latest Intergovernmental Panel on Climate Change’s (IPCC) report, stating that it “unequivocally confirms the negative impacts of climate change”.  They stated the importance of reaching the goals and implementing the rules outlined in the Paris Agreement of the United Nations Framework Convention on Climate Change (UNFCCC).  They also declared their support for Poland in organising COP24, the 24th Session of the Conference of the Parties to the UNFCCC taking place in Katowice in December 2018.

On Thursday, 28 October, the European Council met in EU27 format, together with Eurogroup President, Mário Centeno, and European Central Bank President, Mario Draghi, to discuss the state of the Economic and Monetary Union (EMU).  In his invitation letter, President Tusk stressed the importance of “strengthening Europe’s resilience… on the economic front” and called for progress on the reform of the EMU to be achieved by the end of the year.

In the closing press remarks, President Tusk stated there had been agreement on the need “to accelerate the technical work” of EMU reform in the hopes of reaching an agreement on the Banking Union and the European Stability Mechanism (ESM) ahead of the next Euro Summit which will take place on 14 December.

Although no conclusions were adopted on this occasion under Article 50, a statement issued following the working dinner confirmed the full confidence of EU27 leaders in EU Chief Brexit Negotiator, Michel Barnier, and in his continued efforts to reach an agreement.  It also expressed the regret of EU27 leaders that not enough progress has been made in the Brexit negotiations despite intensified efforts.

President Tusk stated in his remarks following the Summit that he would be prepared to convene a special Brexit Summit “if and when the EU negotiator reports that decisive progress has been made”.  He also said that EU27 leaders did not discuss the length of the transition period at the Summit but that “if the UK decided that an extension of the transition period would be helpful to reach a deal, I am sure that the leaders would be ready to consider it positively”.

EU leaders are due to meet next in Brussels for a European Council Summit on 13-14 December.