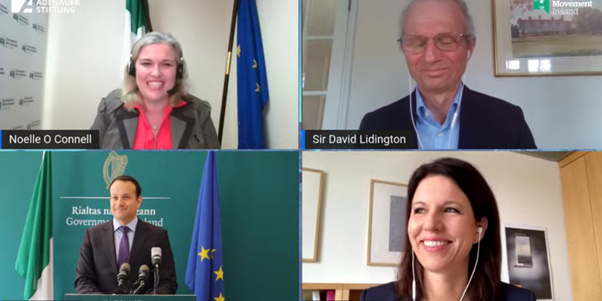 Dublin, 15 April 2021:  Speaking ahead of an online event held by the Konrad-Adenauer-Stiftung and European Movement Ireland this morning, Tánaiste and Minister for Enterprise, Trade and Employment, Leo Varadkar TD said, “I’m really looking forward to today’s discussion. I think it’s timely as we begin a new chapter for Europe and consider our collective future. Ireland remains deeply grateful for the solidarity of our EU neighbours including Germany and Chancellor Merkel throughout the Brexit negotiating period. We favour a policy-focused, citizen-first approach to shaping our relationship with the EU. In a time like this, our citizens want to see us respond to the issues they care about – rather than a focus on institutional issues and mechanisms. Today’s conversation provides an interesting forum to discuss ideas, ahead of the upcoming Conference on the Future of Europe.”

The event, titled ‘Two Islands – One Future, Ireland, the UK and the EU’ featured discussion on Ireland– UK – EU relations post-Brexit, particularly in relation to cooperation and the protection of the Good Friday Agreement, future prospects of the EU – UK relationship and the potential for evolution and development of UK bilateral relations with other EU member states, particularly Germany. Welcoming the timeliness of this event, its moderator and CEO of EM Ireland, Noelle O Connell said, “The fallout of Brexit has left many wondering about potential impacts on EU integration in areas such as enlargement, climate and defence, but also future UK – Ireland – EU relations. Today’s event addressed how these relationships are likely to evolve in a post-Brexit era, Ireland’s place in the future of Europe, and how the upcoming Conference on the Future of Europe can provide a genuine opportunity for dialogue on our future.”

Dr. Katja Leikert Member of the Bundestag, Vice-President of the CDU/CSU parliamentary group spoke at the event, saying, “”Brexit will continue to demand our best efforts if we want to preserve peace and prosperity for all inhabitants on the island of Ireland. EU-UK relations will be paramount to creating a new “normal” for the people of Northern Ireland that can accommodate the needs of all major political groups. I would like to thank Konrad Adenauer Foundation and European Movement Ireland for setting up this event. I am very grateful for the opportunity to share the panel discussion today with Tánaiste Varadkar and Sir Lidington who have both been shaping UK-Irish-EU relations for a long time.”

Rt Hon Sir David Lidington KCB CBE, Former Minister for the Cabinet Office, who also spoke at the event said, “The world is a less friendly place for democracies today than at any time in more than 30 years. Europe’s democracies share common interests and face common threats. After Brexit, we all need to find a new way to work together for our common good. The histories of the United Kingdom and Ireland are intertwined. We share many interests and a particular responsibility to support peace and reconciliation in Northern Ireland. Now that UK and Irish Ministers and officials are no longer meeting week by week at EU gatherings, it should be an urgent priority for both London and Dublin to establish a new bilateral partnership, including regular summits and joint ministerial meetings. Ending the current crisis over the Northern Ireland Protocol will require compromises from both The UK government and the European Commission.”

Matthias Barner, Director Konrad-Adenauer-Stiftung UK & Ireland said, “We as Konrad Adenauer Foundation, a political foundation committed to European values and the unification of Europe, are very happy to cooperate with European Movement Ireland, focusing on mutual challenges, friendship and cooperation in Europe.”

The event can be watched back on YouTube or the EMI Player.

This event was the first in a three-part series of EM Ireland Konrad-Adenauer-Stiftung joint events in 2021, offering a range of different perspectives on the issues, opportunities and relationships that impact Ireland, the UK and the EU. Featuring high-level speakers from Ireland, the UK, across the EU and beyond, these events will focus on areas for potential cooperation, mutual challenges and practical solutions. For more information or to attend future events, follow #EMIKAS or contact EM Ireland as below.