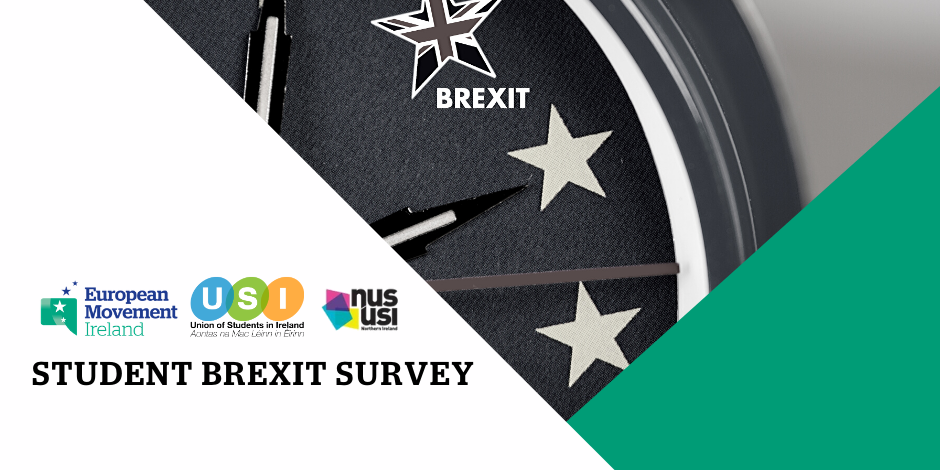 Brexit is a threat to peace in Northern Ireland, say 80% of students

European Movement Ireland teamed up with the Union of Students in Ireland and the National Union of Students Northern Ireland to conduct the first survey of students across the island of Ireland on their views of Brexit and how it will impact their lives.

Over 82% of students surveyed said that they felt that Brexit would have a negative impact on the island of Ireland. When asked more specifically about its impact on Northern Ireland, 79% of those surveyed felt that Brexit would pose a threat to peace in the North. When asked if Brexit been a top concern for them recently, 46% of the students surveyed answered yes. Of the 54% that answered no to this question, their top areas of concern were climate change, education, housing and health with many highlighting mental health in particular.

Commenting on the results, EM Ireland Executive Director, Noelle O Connell said, “we found some surprising results and others were more expected. 80% of students across the island said that they felt that Brexit posed a threat to peace in Northern Ireland, showing the immediate and real concerns of Brexit across the island, and how conscious students are of it.”

She went on to say, “Regarding students’ top concerns and priorities, these results reflect the general feeling and conversations across the Ireland during the current General Election – there are clearly still many concerns around Brexit but other major issues such as climate change, housing and the homelessness crisis are also to the fore of students’ minds.”

“Further, with 70% of students surveyed originally from the Republic of Ireland, it’s clear that concerns around the peace process in Northern Ireland and Brexit in general are issues of shared concern across the island of Ireland.”

“It was important to us to commission a survey of this sort as the student voice is one that is not often heard in the conversation around Brexit.”

President of USI, Lorna Fitzpatrick said, “It is clear from the results of this survey that students are worried about the negative impact Brexit will have on them and society at large with the majority concerned about the threat to peace in Northern Ireland and concerns about student mobility also coming through strongly from the results. We are committed to working with our friends in NUS-USI and NUS in the UK to lobby to ensure that students do not face the negative consequences of Brexit that they fear as evidenced in this survey.”

Commenting on the Survey, President of NUS-USI, Robert Murtagh said, ““This survey shows us that students are very concerned about the impact of Brexit, particularly for peace and stability in NI. One of the greatest threats to peace is the potential dire economic consequences stemming from our exit of the EU. We know there is also deep concern relating specifically to students to be able to live and study across the island and Europe. There are particular worries about the uncertain future of the Erasmus+ programme. We are also concerned about the loss of research funding and European Social Fund that funds 40% of apprenticeships in NI. NUS-USI is committed to working with our local politicians and our colleagues in NUS UK and USI to get best possible deal for students as we leave the EU.”

Responses were sought from students across the island of Ireland. 187 responses were received over a period of 3 weeks