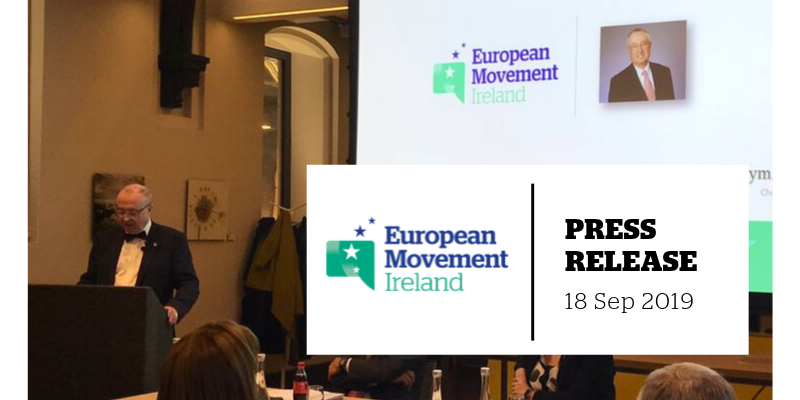 Richard Pym, AIB Chairman addressed European Movement Ireland’s 2019 AGM in Vhi House in Dublin this evening. 44 days ahead of the Brexit deadline, Pym spoke about the potential impact on Ireland.

“For Ireland Brexit is immensely serious, and the effects are both economic and political. A so called ‘no-deal’ Brexit is now a very possible outcome. Economically this is damaging but at least the government of Ireland has prepared well for it, to the extent that it is possible to do so. The UK parliament has legislated against it, but legally in international treaties it is the default of reaching the point of no agreement. It’s where we are headed unless something changes.”

He went on to comment on potential positive impacts for Ireland, saying that “Ireland can also benefit from Brexit as it absorbs economic activity displaced from the UK and any short-term adverse economic impact can be protected by the European Union. The population of Ireland is only around 1% of the EU’s and solidarity has been remarkably strong amongst the 27…There will be initial damage to Ireland from Brexit but much less than to Britain, and Ireland has the support of the rest of the EU, it isn’t facing this alone.”

Pym concluded with the motto of Harold Macmillan, former British Prime Minister and founder of European Free Trade Association who applied for Britain to join the European Economic Community – a move famously vetoed by French president Charles de Gaulle in 1963 –

This, Pym said, is “more than ever relevant and applicable today.”

EM Ireland’s Executive Director, Noelle O Connell is available for interview and comment. Contact Lisa Nic an Bhreithimh as above.