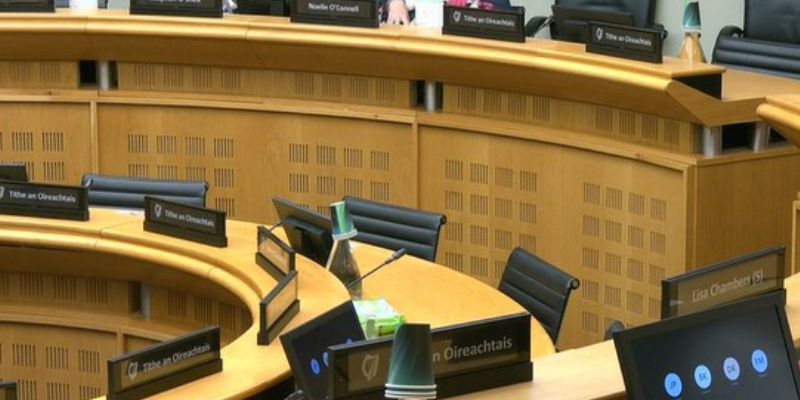 Dublin, 28 September: The EU must act on reforming its policies and institutions as outlined in the findings of a year-long citizens forum across 27 of its member states or risk ‘eroding public trust in the EU’, European Movement Ireland warns the Oireachtas.

EM Ireland appeared in front of Joint Oireachtas Committee on European Union Affairs today and told its members implementing the findings of the ‘Conference on the Future of Europe’ is critical.

The Conference on the Future of Europe was a bottom-up project to shape and guide political change across the Union. Across all 27 member states in a year-long project – including in Ireland – citizens took part in locally organised events and forums.

CEO of European Movement Ireland Noelle O Connell said: “After a year of deliberations, the Conference came to an end on 9 May 2022. In the closing ceremony in Strasbourg, the Presidents of the European Parliament, Commission and Council received a final report from the Conference participants containing 49 wide-ranging, ambitious and forward-looking proposals and 326 individual measures.

“We now need to ensure that recommendations are followed by tangible, implementable proposals that deliver on the issues raised. They cannot be allowed to gather dust in some report on a shelf.”

The Committee members also heard that some of the proposals may require a Treaty change.

“While many of the proposals do not require treaty change – some may. And it is evident from the calls for a Convention that reform of the Treaties is back as a talking point after becoming a taboo subject. There is some understandable reluctance to this.

“However, we know from the Conference that people want to be engaged on what the EU is doing, want to have their voices heard and want to contribute their opinions regularly.

“From EM Ireland’s perspective, we are very clear that we want this process to continue, up to and including Treaty change, if that proves necessary. If we waste the opportunity presented by the Conference, there will be consequences. But if we grasp it, we will be a little further along on the journey towards a more inclusive, more democratic, better functioning Europe,” Ms O Connell added. 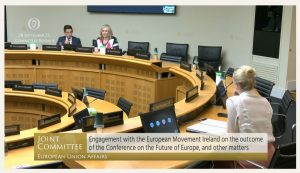 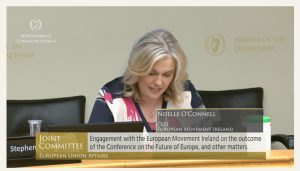 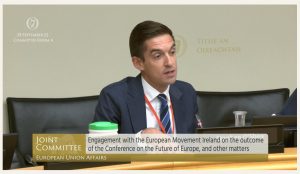 Earlier this month, the European Commission also rowed in behind a Convention, with President von der Leyen expressing support during her State of the Union speech.