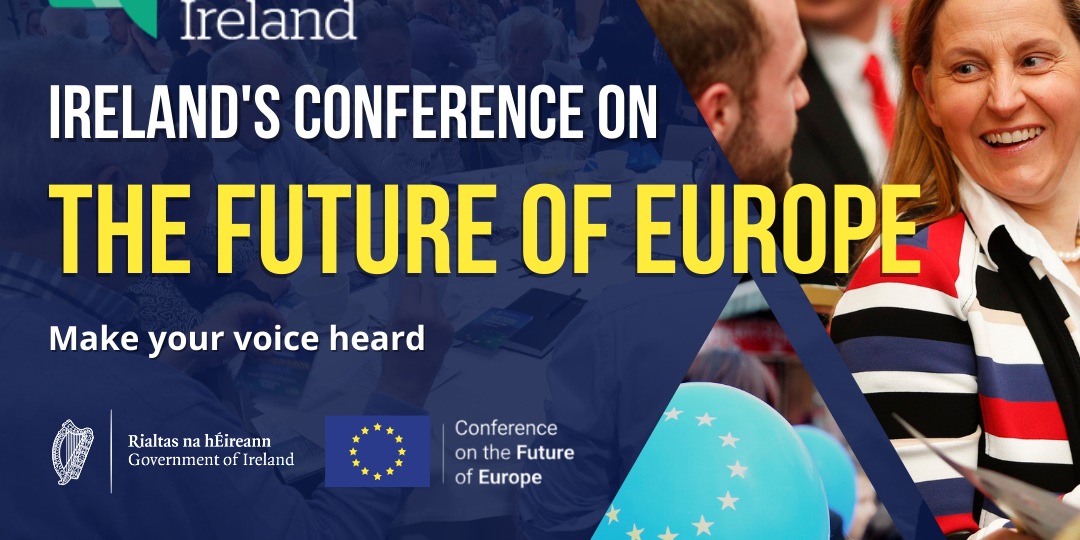 Dublin, 24 June 2021:  As part of the Conference on the Future of Europe, a Europe-wide initiative to involve people in Ireland and across Europe in a debate about the EU’s future challenges and priorities, people in Leinster met online on Thursday, 17 June to discuss the issues that matter to them.

Participants discussed key issues for the future of Ireland and the EU more broadly, after recent challenges posed by Covid-19 and Brexit, including health care, climate change and the digital transformation.

Those participating in the Leinster Online Panel suggested that people must be at the centre of Europe’s policies going forward, focusing on the human impact of how the EU develops. In discussing issues such as how combatting climate change will affect employment across Europe, participants called for EU-wide supports to ensure that nobody is left behind and that our economies are fit for purpose. Similarly, as economies recover from the Covid-19 pandemic, participants called for EU-wide support for new ways of working that support a positive work life balance and make the most of new ways of working. At the heart of these calls was a support for strong communication between Member States at all levels.

Speaking about the meeting, and the Conference on the Future of Europe, Minister of State for European Affairs, Thomas Byrne TD said, “The Conference on the Future of Europe is an unprecedented, valuable and still evolving opportunity for citizens all over Europe to make their voices heard about the future direction of our Union. Ireland has always been a very strong advocate for citizen engagement within the EU, and this opportunity for real and active citizen led discussion will be no different. The EEC that we joined in 1973 is very different from the vibrant, diverse, multicultural, European Union that we’re part of today, however Europe will not have a future if our young generation don’t have a future in it. The Conference should play an important role in allowing us to review where we are as a Union of 450 million people, where we want to go and Ireland’s place in it. The Conference on the Future of Europe will be the voice of the people, setting out our vision of Europe for the next generation”.

European Movement Ireland CEO, Noelle O Connell, said: “Our Leinster Online Panel as part of the Conference on the Future of Europe provided a great opportunity for people who care about the future of Ireland in the EU to engage in a meaningful, open discussion from a variety of different perspectives. It is key that we engage people from all corners of Ireland in this process and that a diverse range of voices are shared and heard. We look forward to continuing our panel meetings around Ireland in the weeks and months ahead. We’re grateful that people are willing to share their time to engage in this process. It is a unique opportunity where people in Ireland can have their voice heard on future opportunities and challenges facing Europe.”