Press Release: Irish MEPs and key stakeholders highlight their expectations for 2021 State of the European Union Address and Debate 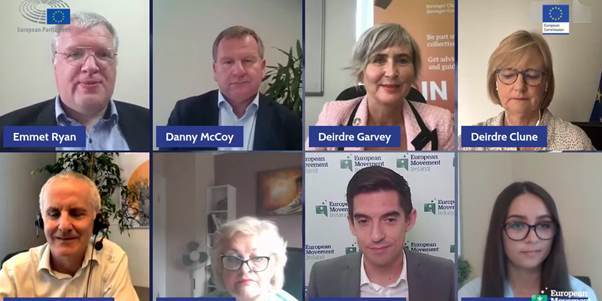 Commenting on the upcoming State of the Union address and debate, Ciarán Cuffe MEP said, “The European Union’s recovery from the COVID pandemic must show leadership to the world on the climate crisis.  In addition, the EU must be a beacon for democracy within Europe, and in the developing world. We have had dire warnings from the IPCC about climate change. We have to act fast to avoid catastrophe. There is an opportunity with the recently announced ‘Fit for 55’ package to reduce greenhouse gas emissions by 55% by 2030 and hit carbon neutrality by 2050.  President von der Leyen has an opportunity with her SOTEU speech to get the detail right and show leadership on the road to the COP26 climate summit in Glasgow this November. The EU must ensure a just transition for workers in phasing out fossil fuels, tackling energy poverty and ensuring the biggest polluters pay for their environmental damage.  Fit for 55 will help us deliver on the European Green Deal, and reach our climate targets and create new jobs. We must also ensure that recent events in Afghanistan are used to boost aid for health and education in the developing world, rather than diverted to increased military expenditure.”

Speaking about Europe’s future, Stephen O’Shea, CEO of European Movement Ireland said, “As we hopefully emerge from the worst of the pandemic and look to the future, the Conference on the Future of Europe is the opportunity to shape what the EU might look like in the years ahead. People across Ireland and Europe are committing their time and ideas to this process and they must be listened to. We hope to see a commitment to acting on the proposals that emerge from the Conference and championing its potential. We must also defend the values central to the EU throughout its history and need to see a stronger resolve on the rule of law. The actions of some Member States have gone too far. The challenges to EU law and democratic backsliding cannot continue.”

Emmy Coffey Nguyen, Alternate National Citizens’ Representative for the Conference on the Future of Europe said, “I feel privileged to be part of this year’s discussion in anticipation of President von der Leyen’s State of the Union address. In my capacity as Ireland’s Alternate National Citizen Representative, I would like to address the immediate and ambitious action needed to respond to the Climate Emergency, in addition to sustainability practices across industries in the EU notwithstanding, of course, the cost of living and the challenges of affordable housing affecting Irish citizens today. I hope that my role can help amplify those voices of all Irish citizens, particularly young people, to bring about more fruitful debate and more importantly, positive results for all EU citizens.”

The roundtable discussion can be watched back here and more information about the State of the Union address and debate can be found here.