Irish people living abroad call for EU action on taxation, the rule of law, cross-border health care, the environment and communication with citizens as part of discussion on the Future of Europe 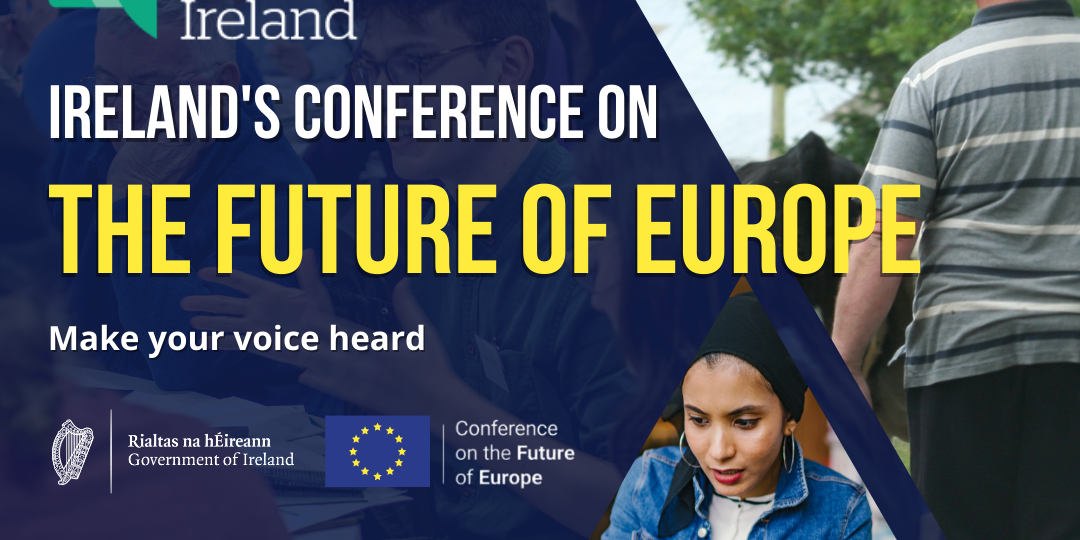 Irish people living across Europe took part in an online discussion on the Conference on the Future of Europe highlighting challenges, concerns and hopes for Europe’s future

10 September 2021:  Irish people living across the EU met online earlier this month to discuss issues of importance to them as part of the Conference on the Future of Europe, a Europe-wide initiative to involve citizens in a debate about the EU’s future challenges and priorities.

Participants, joining online from countries across Europe raised their key issues for the future of Ireland, Irish abroad and the EU more broadly after the recent challenges posed by Covid-19 and Brexit in areas such as health care, climate change, global relations, the EU economy and the digital transformation.

People at the online meeting called for increased accessibility and standardisation of health care across the EU. Participants also called for a commitment to accessibility for all EU citizens as part of the recovery from Covid-19 and with regard to advancements in digital technology, to ensure that none of our citizens are left behind as Europe emerges from the pandemic.

Further, those taking part in the meeting suggested EU action and leadership on the communication of clear, factual information, particularly on climate change and health, referencing the rise of disinformation during the pandemic. Participants suggested greater co-operation across the EU on economic policy, calling for more tax harmonisation across EU Member States. Participants also called for greater action from the EU on the rule of law but advised caution in relation to sanctions on non-compliant countries, fearing where resulting funding cuts may be made on the ground or Member States distancing from the EU.

By EU countries sharing success stories and lessons learned, participants felt that the future of Europe can be a more innovative, sustainable and equitable place for all.

European Movement Ireland CEO, Noelle O Connell, said: “This Conference on the Future of Europe panel had a special focus on Irish people living in other EU Member States, and was an opportunity for them to engage in a meaningful, open discussion that benefitted from such a variety of different perspectives and backgrounds. The experience of the Irish diaspora is unique, and their nuanced points of view, coming from the different corners of the EU, are incredibly valuable as we begin to understand what Irish people want the EU to look like in the next five, ten, twenty years. The Conference on the Future of Europe’s success relies on engaging diverse ranges of people in these discussions and it’s crucial that we hear from as many voices as possible. We’re grateful that people are willing to share their time to engage in this process, no matter where they are. This is unique opportunity where people can have their voice heard on future opportunities and challenges facing Europe.”

Minister of State for European Affairs, Thomas Byrne TD, addressed attendees at the start of the online Conference on the Future of Europe panel discussion.