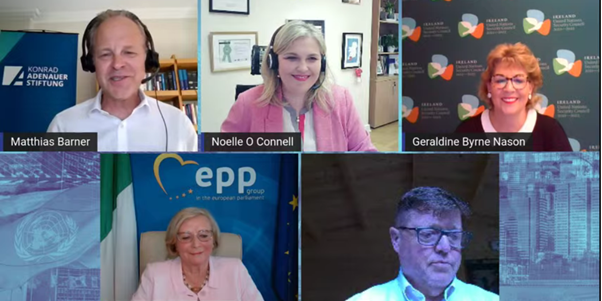 Dublin, 16 June 2021: Following G7 Summit discussions on Brexit, Covid-19 and other challenges to international co-operation, EM Ireland and the Konrad-Adenauer-Stiftung today held an online discussion highlighting the importance of multilateralism titled, ‘A Multilateral Future: Ireland, the European Union and the United Nations’.

Speaking at the event, HE, Ambassador Geraldine Byrne Nason, Permanent Representative of Ireland to the UN said, “As a proud member of the European Union, and, for almost six months, sitting at the top table as a member of the UN Security Council, Ireland is relentless in promoting multilateralism and our commitment to shared solutions. This spirit is borne of our lived experience of conflict and peacebuilding in Ireland, and on the continent of Europe. I look forward to sharing our ideas for a multilateral future”.

Frances Fitzgerald MEP for Dublin and Vice Chair of the EPP Group said, “Ireland’s role internationally has always been that of a bridge-builder. Ireland is a staunch supporter of the multilateral rules-based international order that citizens have enjoyed over the last number of decades. As a member of the European Union and a non-permanent member of the UN Security Council, Ireland continuously advocates for the advancement of fundamental human rights, respect for human dignity, freedom of speech and press and the resolution of conflict through peaceful means. Unfortunately, far too many do not enjoy these values of liberal democracies that we sometimes take for granted in Ireland and Europe. As we enter a new period politically, with a renewed transatlantic relationship under President Biden and post-Brexit, Europe and Ireland in particular have the opportunity to further exert its influence on fundamental values globally. As a prominent member of the EU and UN, today’s discussion provides us with a unique opportunity to debate and identify Ireland’s priorities in the years ahead at both EU and UN level given the uncertain geopolitical situation at present”.

Ben Tonra, Full Professor of International Relations, UCD School of Politics and International Relations also spoke at the event, saying, “Ireland stands at a fascinating turning point in its foreign policy history. Driven by a tradition of commitment to the rule of law, collective security and multilateral institutions, Ireland – working in concert with its many international partners – must redouble its efforts in their defence. Challenged by shifting geopolitical balances, the rise of overtly authoritarian powers and determined attempts to undermine many of the values underpinning the contemporary global order, Ireland has a unique perspective to share and a responsibility to act. With the ongoing extension of its diplomatic network and a serious review of the role of the Defence Forces underway, Ireland potentially has both the will and capacity to raise its game in the pursuit of peace, security and justice.”

During the event, speakers reflected on the significance of Ireland’s seat on the UN Security Council, six months after the beginning of the two-year term, for our future multilateral relations. Matthias Barner, Director of Konrad-Adenauer-Stiftung UK & Ireland delivered a welcome address as part of the online event which was the second in a three-part series of EM Ireland – Konrad-Adenauer-Stiftung collaborative events, offering a range of different perspectives on the issues and opportunities that impact Ireland and its global relationships. Featuring high-level speakers, these events each focus on areas for potential cooperation, mutual challenges and practical solutions. Previous events can be viewed here. Today’s event was moderated by Noelle O Connell, CEO of EM Ireland.