European Movement Ireland Launches New Voter Registration Drive: ‘Is Someone You Love in the Picture?’ 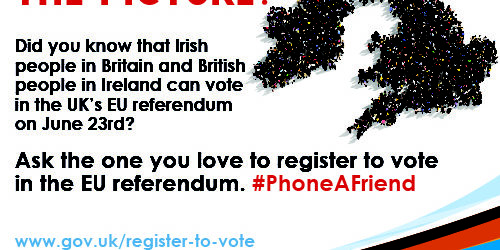 European Movement Ireland is urging them to register to vote by 7 June deadline, ahead of the referendum on June 23rd.

The #PhoneAFriend campaign, which runs until the registration deadline, takes the form of graphics, which people can use on their own online profiles.  There will be further materials to follow, including postcards which can be sent to relatives reminding them to register.

Speaking today, Maurice Pratt, Chairman of European Movement Ireland said, “It is worth noting that an estimated 500,000 Irish people based in England, Scotland and Wales, are eligible to vote on June 23rd and can do so, as part of a much larger Irish diaspora of about 5 million people in the UK. There are also an estimated 280,000 British born people living in Ireland.”

“European Movement Ireland is launching this campaign to raise awareness so that Irish people living in the UK know that they have a right to vote on 23 June. We are urging people here in Ireland to encourage their friends and families to register.  They have until June 7th to do so,” said Noelle O Connell, Executive Director of European Movement Ireland.

“Irish people in the UK and British people in Ireland simply have to log onto www.gov.uk/register-to-vote – it’s that easy and as of today, they have just over 7 weeks to do so,” added Ms O Connell.

“Everyone will of course accept the final decision of the UK electorate but we hope that all of those who are eligible to vote will do so.  It’s vital that they have their say on the day, including Irish people who have a unique opportunity to participate in this important vote,” concluded Mr Pratt.