Briefing on the Romanian Presidency of the Council of the EU 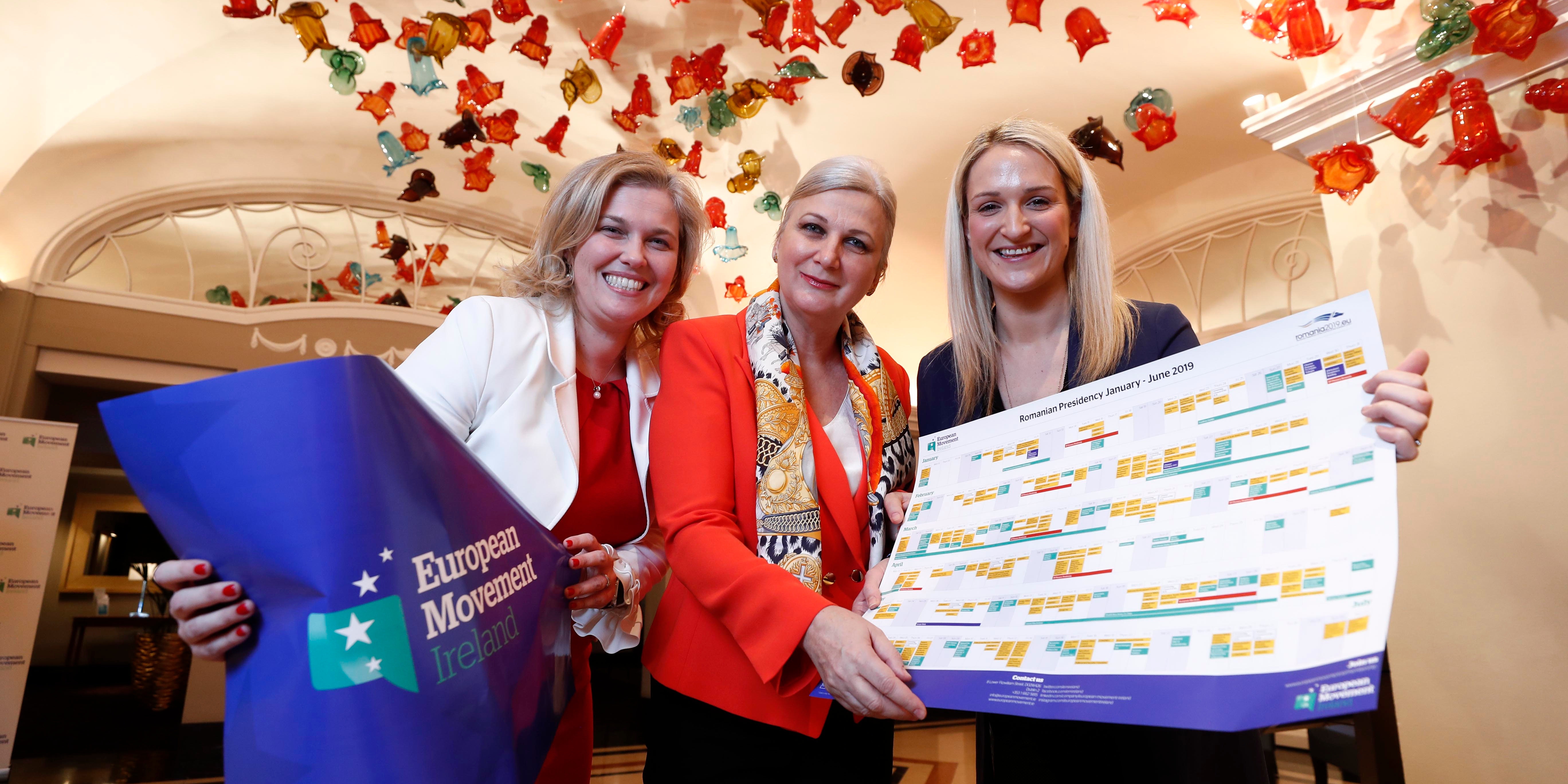 Focus over the next six months is on cohesion, according to Ambassador of Romania to Ireland, Her Excellency Manuela Breazu speaking at the European Movement Ireland (EM Ireland) briefing on the first Romanian Presidency of the Council of the European Union and launch of the EM Ireland Presidency calendar.  Ambassador Breazu was joined by Minister of State for European Affairs, Helen McEntee TD who outlined Ireland’s key priorities during the current Presidency.

Speaking at the event, Minister Helen McEntee TD, said: “Ireland wishes the Romanian government every success with its first Presidency of the Council of the EU.  I and my colleagues across government look forward to working closely with Romanian Ministers over the next six months.

“This Presidency comes at a critical juncture for the EU.  Not only will we be focusing on Brexit; but also on the special EU Summit on the 9 May in Romania where EU leaders will meet to discuss the Future of Europe, processes that have taken place across the EU over the last 18 months.

“Ireland also supports Romania’s priority of expansion of the EU.  To that end, I will be visiting Macedonia and Albania next week with my Finnish counterpart. I look forward to engaging with their governments and offering Ireland’s support for their accession to the EU that I hope will be able to happen in the coming years.”

Ambassador of Romania to Ireland, H.E. Manuela Breazu outlined Romania’s priorities for the six months of the Presidency: ‘The Romanian Presidency’s programme is founded on the belief that any vision for the future must be built around the key principles that have steered the evolution of the European Union so far. These principles have maintained their relevance all along the evolution of the European project and have the potential to serve as a driving force for our common action towards consolidating the Union. This is the reason why the approach of the Romanian Presidency of the Council of the European Union revolves around the principle of cohesion, illustrated in our motto and central theme of the Presidency, “Cohesion, a common European value”.’

Concluding the event, EM Ireland Executive Director, Noelle O Connell said: “We would like to wish Romania every success with its first Presidency of the Council of the EU. Romania takes the helm for its first presidency at a crucial time for the EU with Brexit, the European Parliament elections and the Future of Europe summit in Sibiu coming up in the next six months. Romania’s focus on supporting the values that led to the foundation of the EU and the principle of cohesion will help frame the challenging discussions that lie ahead.”