In the wake of Russia’s invasion of Ukraine in February 2022, Ukraine applied to join the EU. Since it was founded in 1957 the EU has enlarged seven times, growing from six Member States to 27. This Just the Facts examines the process of joining the EU, the status of current candidate countries, and examines Ukraine’s likelihood of joining the EU.

Joining the EU has been an ambition for many European countries, as the EU is viewed as providing political stability, security, and an opportunity for economic modernisation, including access to significant EU funding.

The accession process has been described as “a complex, arduous and expensive undertaking that drags out over several years, even decades, and requires an exceptional commitment from the candidate country, which is asked to implement a lengthy catalogue of reforms to comply with EU norms.”

Article 49 of the Treaty on European Union sets out the terms of accession, states that “Any European State which respects the values referred to in Article 2 and is committed to promoting them may apply to become a member of the Union.” Article 2 sets out the EU’s fundamental values which include respect for democracy, rule of law and human rights, as well as the protection of minorities.

In June 1993, further criteria were adopted at a European Council meeting in Copenhagen, Denmark. The Copenhagen Criteria states, “that countries must have stable, functioning democratic institutions”, protect the EU’s fundamental values, have functioning market economies, and implement EU laws. In March 2020, the European Council adopted European Commission proposals for several modifications to the accession process.

The European Commission leads negotiations with an application country, seeking approval from the European Council or the Council of the EU, while regularly updating the European Parliament. The process is outlined here:

The length of time of formal negotiations has varied, averaging about four years and 10 months. It took Austria, Finland, and Sweden just under two years to complete their accession negotiations, the shortest, before joining in January 1995., while in the case of Croatia, the most recent country to join the EU, accession talks took nearly eight years before the country joined in July 2013. In the case of Ireland, which is marking 50 years of membership since joining in January 1973, the process took about two and a half years. 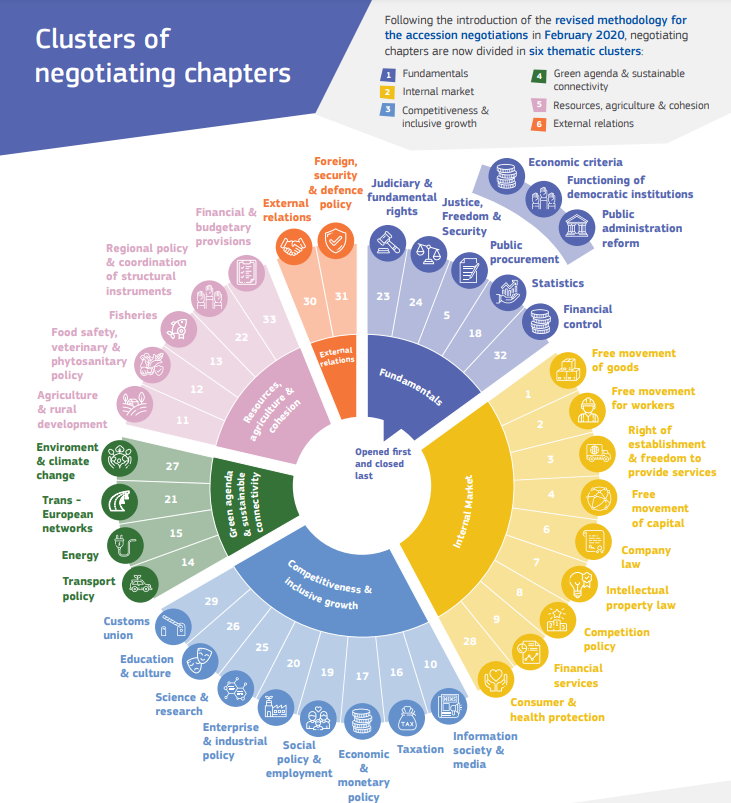 Albania officially applied to join in April 2009 and was granted candidate status in June 2014. In May 2021, the European Commission stated that Albania had fulfilled specific conditions needed to begin accession negotiations.

Having declared independence from Serbia in May 2006, Montenegro applied for EU membership in December 2008. It received candidate status in December 2010, with negotiations beginning in June 2012. While all chapters are open, just three have been closed.

Having applied for EU membership in March 2004, North Macedonia was granted candidate status in December 2005. In March 2020 it was agreed to open accession negotiations with North Macedonia. The European Commission drafted a negotiation framework in July 2020.

In December 2009 Serbia applied to join the EU, and was given candidate status in March 2012, with negotiations beginning in January 2014. Of the 24 chapters opened, two have been closed.

Turkey applied to join the EU in April 1987 and became a candidate country in December 1999, with negotiations officially beginning in October 2005. However, in June 2018 the General Affairs Council stated that “Turkey has been moving further away from the European Union. Turkey’s accession negotiations have therefore effectively come to a standstill and no further chapters can be considered for opening or closing”.

Bosnia and Herzegovina (BiH), while not an official candidate country, applied to join in February 2016. In May 2016, the European Commission outlined in an Opinion a total of 14 requirements that BiH needed to fulfil, in order for accession negotiations to begin.

Ukraine’s likelihood of joining the EU

On 28 February, just days after Russia began its invasion of Ukraine, President Zelenskyy, Prime Minister Shmyhal and Ruslan Stefanchuk, Chairman of the Ukrainian Parliament, all signed an application to join the EU.

Since the application, the response from the EU has been to emphasise their continued solidarity with Ukraine and wish for it to join the EU, but leaders cautioned and acknowledged that it can take years to become a Member State. It took Poland, a country with a similar population size, ten years to join the EU from its official application in April 1994 to accession in May 2004.

An EU – Ukraine Association Agreement entered into force in September 2017, while EU visa rules for Ukrainians were liberalised from June 2017.

Nonetheless, Ukraine’s application prompted Georgia and Moldovia to also formally apply to join the EU, underlining that membership of the EU remains a desire for many European countries.

What is the EU’s Common European Asylum System?