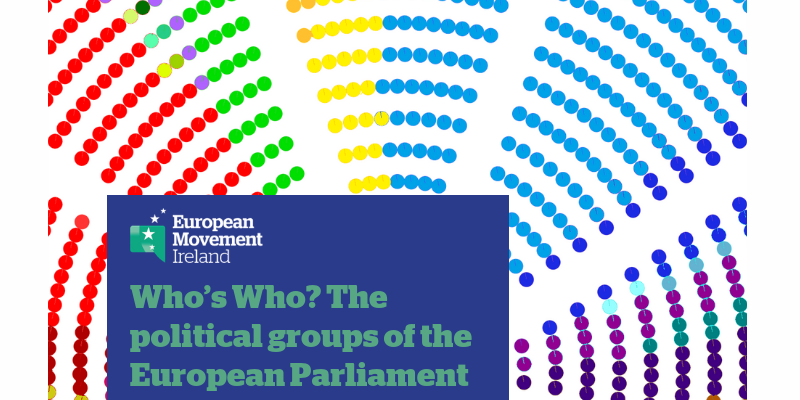 MEPs do not sit along national or individual party lines in the European Parliament, but rather with their European political group.  A political group must have a minimum of 25 members, representing at least a quarter of Member States.  There are currently eight of these groups in the European Parliament, although some MEPs choose not to affiliate with any group, in which case they are known as “non-attached” members, such as Northern Irish MEP, Diane Dodds.

The centre-right European People’s Party (EPP) is the largest political group within the European Parliament since 1999.  The EPP returned 221 MEPs in the 2014 elections out of a total of 751, including Ireland’s four Fine Gael MEPs.  President of the European Council, Donald Tusk is a member of the EPP, as is European Commission President, Jean-Claude Juncker.  The EPP is home to a broad spectrum of national parties, from German Chancellor, Angela Merkel’s Christian Democratic Union (CDU), traditionally strong supporters of EU integration, to the currently-suspended Hungarian Prime Minister, Viktor Orbán’s party ‘Fidesz’, whose Eurosceptic attitude and non-compliance with the rule of law has led many to question its place within the EPP.

On the centre-left is the Progressive Alliance of Socialists and Democrats (S&D) which won 191 seats in the 2014 elections.  Ireland’s Labour Party is a member of the S&D, but returned no MEPs in the 2014 elections (for the first time).  Independent MEP Nessa Childers, who is not seeking re-election in May, is the only current Irish MEP that sits with the S&D in the European Parliament.  The second biggest party in the European Parliament, the S&D has members from every EU Member State, including Spain’s ruling Socialist Workers’ Party (PSOE) and Italy’s Democratic Party (PD).  The S&D will lose the 20 UK seats Labour won in 2014, due to Brexit.

The centrist and pro-EU group known as the Alliance of Liberals and Democrats for Europe (ALDE) is predicted to increase its number of seats from its current 68 in May.  This coalition is currently the fourth largest group and is led by Guy Verhofstadt MEP, the Chair of the European Parliament Brexit Steering Group.  Fianna Fáil, as well as Independent MEP, Marian Harkin, are members of ALDE.  French President, Emmanuel Macron’s ‘En Marche’ party intends to campaign on a pro-EU platform with ALDE for the upcoming elections.

Brian Crowley MEP, although a member of Fianna Fáil, left ALDE in 2014 to join the third-biggest group in the European Parliament, the centre-right European Conservatives and Reformists group (ECR).  This group was founded in 2009 with the aim of taking the EU in a new “Eurorealist” direction, with more power for national governments.  The ECR is expected to lose seats in the upcoming elections, without their cohort of UK Conservative MEPs and one Ulster Unionist Party MEP, James Nicholson, due to Brexit. The UK Conservatives have been the largest party in the ECR, winning 19 seats in 2014.

The final group with sitting Irish MEPs as members is the Confederal Group of the European United Left – Nordic Green Left (GUE-NGL), the two groups having merged in 1995. Sinn Féin’s four MEPs – three elected in the Republic and one in Northern Ireland – sat with this group in the European Parliament, as has Independent MEP, Luke ‘Ming’ Flanagan.  This group, which campaigns on a left-wing platform, has 52 members, including MEPs from Spain’s ‘Podemos’ and Greece’s ‘Syriza’.

The following three European Parliament groups currently have no Irish MEPs as members: The Group of the Greens/European Free Alliance (Greens/EFA), who campaign on a green and left-wing platform; The Europe of Freedom and Direct Democracy Group (EFDD), a Eurosceptic group led by UK MEP, Nigel Farage; and finally the smallest group in the European Parliament with just 37 members, the far-right Europe of Nations and Freedom Group (ENF), which includes Deputy Italian Prime Minister, Matteo Salvini’s Northern League.  Polls predict the ENF will increase its number of seats in the upcoming elections.

The 13 post-Brexit MEPs from Ireland will represent your interests, so understanding who these disparate political groups are, and which MEPs affiliate with which group, is important ahead of the elections on 24 May. It helps gauge the positions MEPs are likely to take on various policy issues, and the kind of Europe they want in the future.

You can find more information on each of the political groups at their websites: