What to expect from the 2020 State of the European Union 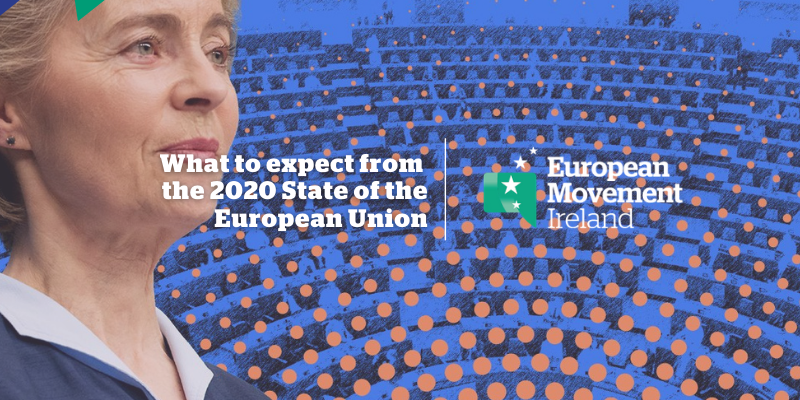 During a turbulent year that has tested solidarity among EU Member States, the State of the Union address by European Commission President Ursula von der Leyen to the European Parliament will be watched keenly by citizens across Europe and further afield. This Just the Facts examines the importance of this annual event in the EU’s political calendar and the key issues that will be involved.

What is the State of the Union address?

Intended as a tool for accountability and a forum for discussion, the SOTEU address affords the Commission President the opportunity to outline their vision for the EU and to informally introduce the legislation that the Commission intends to propose over the following months.

Following the address, the Commission President engages in a debate with members of the Parliament during which the particulars of the Commission Work Programme are discussed.

What has happened in past SOTEU addresses?

The 2020 State of the Union address on Wednesday, 16 September 2020 will be the tenth such address. The first was delivered in 2010 by José Manuel Barroso.

The address format was used by Barroso primarily as a means of discussing the economic recovery of the EU following the financial crisis at that time. In the first State of the Union address, Barroso stressed the importance of the Single Market, particularly with regard to energy interconnections, research and development aid.

Following the COVID-19 crisis, Europe’s economic recovery is of critical importance and it is expected to be a central theme in President von der Leyen’s State of the Union address.

Much discussion of the Next Generation EU recovery plan, the €750 billion fund for stimulating Europe’s economy, is expected with MEPs after President von der Leyen’s address.

Further, debate around economic initiatives is to be expected as well such as on the European Fund for Strategic Investment, which is designed to aid SMEs; the Temporary Framework on State Aid which relaxes state aid rules; and the Support mitigating Unemployment Risks in Emergencies (SURE) initiative which finances unemployment schemes. 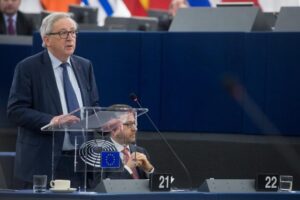 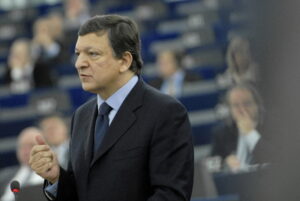 In 2018, Jean-Claude Juncker’s address focused on the centrality of unity to Europe’s emerging geopolitical presence and in 2017, Juncker’s SOTEU focused on the importance of unity in relation to the Euro. The programme for the current German Presidency of the Council of the EU, entitled ‘Together for Europe’s Recovery’, is similarly focused on unity.

Europe’s recovery from the COVID-19 crisis is expected to emerge as another central theme in the State of the Union address.

Indeed, the Commission’s focus throughout much of this year has been the continued containment of the virus and the maintenance of a shared sense of European solidarity with respect to supply chains, medical supplies and the treatment of COVID-19 patients.

President von der Leyen is expected to discuss the reinstating of the Schengen Area and a return to regular processes with regards to the protection of the external border and the processing of visas.

Lastly, von der Leyen is expected to discuss a sustainable recovery from the crisis, on ensuring that the green and digital transitions are enshrined in the recovery framework with respect to the economy, strengthening the Single Market, and employment.

Ultimately, the three themes of economic progress, unity and health recovery are expected to feature. The State of the Union address is an expansive address and issues from the improvement of the EU’s crisis management instruments, to social cohesion and external policy are open for discussion and debate.

Where can I watch the SOTEU?

The address will be broadcast live online from 8am (Irish time) on Wednesday, 16 September 2020. Further updates and information about it can be found here.

In her address as part of the webinar, Noelle O Connell said, “It has been a momentous run-in to next Wednesday’s State of the Union, set as it is against the backdrop of the global pandemic…and in addition we have seen the hugely worrying developments played out in Westminster only this week…In President von der Leyen’s SOTEU address on 16 September, from an EM Ireland perspective, I hope the following features: firstly, that we see a detailed roadmap to recovery; secondly, the commitment to deliberative democracy initiatives that hear the concerns and engage the views of all Europeans; thirdly, the promise of sustained social responsibility and finally, an EU that is not afraid to lead on the global stage, a European Union that defends and champions the upholding of the founding values of our shared Union”.

Our breakfast webinar is available to watch back in full here and you can tune in to the State of the Union address and debate live this week here. All of European Movement Ireland’s events, webinars and podcasts can be found on the EMI Player here.