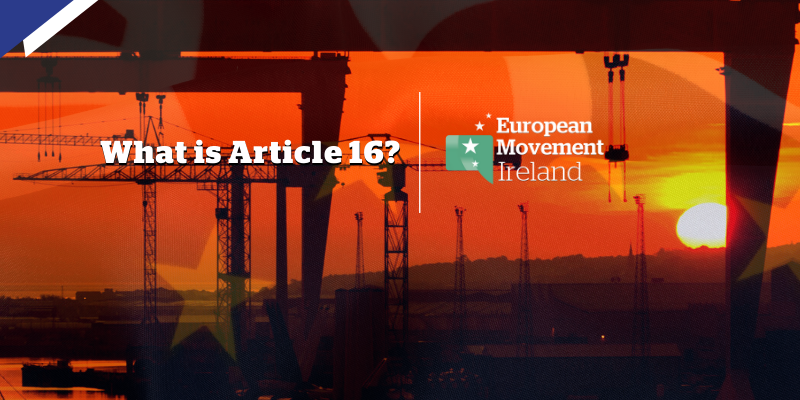 The possibility of the UK government triggering Article 16 of the Protocol on Ireland and Northern Ireland remains active. This Just the Facts examines Article 16 and what would happen if it was triggered.

Background to the Protocol

Brexit presented a major problem to solve: avoiding a hard border on the island of Ireland, while the UK left the EU’s Single Market and Customs Union.

In October 2019 the Protocol on Ireland and Northern Ireland, the alternative to the ‘Irish Backstop’, was agreed by the EU and UK, whereby Northern Ireland would essentially remain in the Single Market for goods.

It is co-chaired by Maroš Šefčovič, European Commission Vice President and Commissioner for Interinstitutional Relations and Foresight, and since March 2021, by David Frost, UK Minister of State at the Cabinet Office.

Why is Article 16 in the news?

The Protocol, which entered into force on 31 December 2020, has since drawn criticism from the UK government. Prime Minister Boris Johnson said as early as 3 February 2021 that he is prepared to trigger Article 16.

In the Command Paper, “Northern Ireland Protocol: the way forward”, published in July 2021, the Prime Minister states, “the difficulties are so profound [in Northern Ireland] that I have had to consider whether safeguarding action is necessary under the Article 16 framework which the Protocol provides.”

Further warnings were made by David Frost in September, at the Conservative Party conference in Manchester (4 October) and at the British Embassy in Lisbon (12 October).

On October 13 the European Commission published proposals that would significantly reduce checks, increase flexibility for customs controls, address previous concerns on the supply of medicines to Northern Ireland, and provide enhanced engagement for business, civil society and political groups.

Maroš Šefčovič said that these proposals are the “direct and genuine” response to concerns raised when he visited Northern Ireland in September 2021.

On October 25 David Frost re-emphasised his position before the UK Parliament’s European Scrutiny Committee: “we cannot have the courts of one side settling disputes between us”.

However, the Commission has always objected to this, stressing that solutions should be found within the framework of the Protocol. On 28 October, Commission President Ursula von der Leyen repeated this, rejecting the UK demand to reconsider the role of the CJEU in the Protocol.

With both sides engaged in discussions, the possibility of triggering Article 16 remains open.

Article 16 broken into three parts; safeguards, rebalancing and governing procedures for both, as outlined in Annex 7.

It outlines how safeguarding measures can be taken by both parties when “serious economic, societal or environmental difficulties that are liable to persist, or to diversion of trade” take place. Such measures will be limited “to their scope and duration to what is strictly necessary in order to remedy the situation.” However, it does not define what amounts to seriousness or the limits.

On rebalancing, the Article outlines that the other party can take fair rebalancing actions, if safeguarding actions result in a disconnect between the rights and the obligations outlined in the Protocol.

Safeguard measures require notification to the other party of their intent through the Joint Committee, even if either part is “considering” them. This launches a consultation between the two parties to find “a commonly acceptable solution”.

If a party introduces safeguards, or rebalancing measures, the Joint Committee must be notified “without delay”, where the measures are discussed every three months “with a view to both abolishing them as soon as possible and limiting their scope.”

A breakdown of the process of triggering Article 16 can be found below. [Source: Institute of Government] 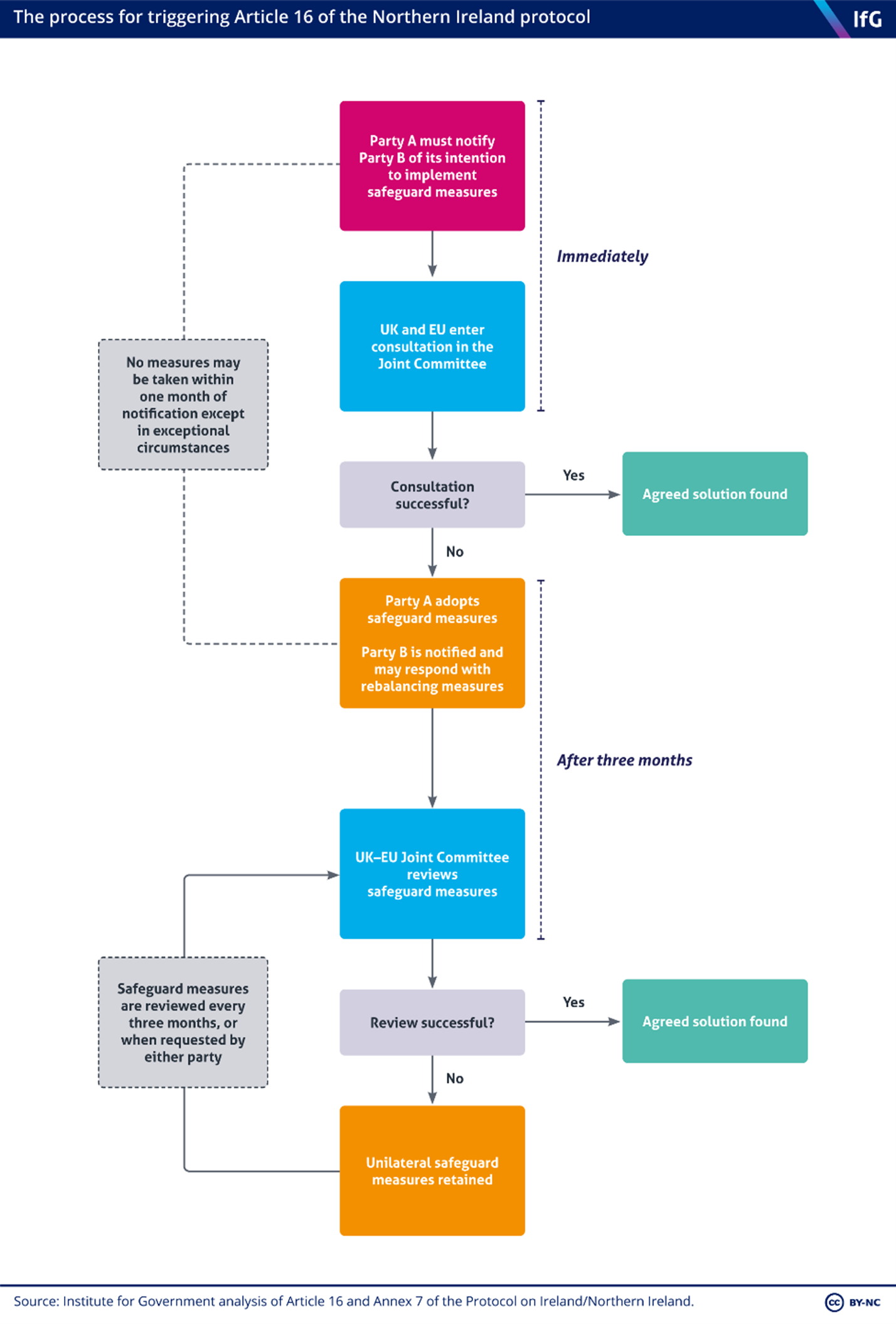 What happens if Article 16 is triggered?

Triggering Article 16 directs the EU and the UK to enter consultations with one another in order to find solutions when problems resulting from the Protocol arise.

Any “unilateral action under Article 16 is required to be specific and limited only to the aspect(s) of the Protocol at fault, all other aspects of the Protocol will remain in place throughout.”

Therefore, Article 16 does not directly result in the Protocol being suspended or disapplied. That route exists with Article 18, the democratic consent mechanism, whereby the Northern Ireland Assembly votes on the continuation of the Protocol.

Consent is given by a simple majority of Northern Ireland Assembly members and stands for four years. However, if consent is reached on a cross-community basis, a vote is not required for another eight years. Consent will continually be sought like this for as long as the Protocol remains in force. The first vote is expected in late 2024.

If the UK government triggers Article 16, it is likely that the EU will respond, with the European Commission reportedly working on a set of measures.

For now, both sides remain in discussions and with talk of a December deadline, another winter of volatility and deadlines looms.