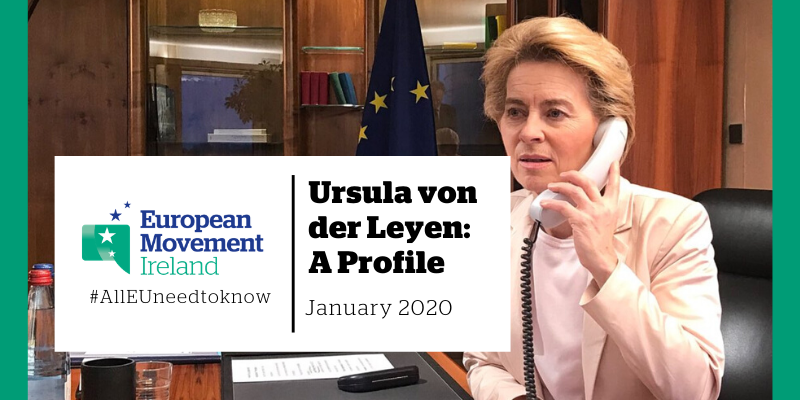 On 1 December 2019, the new European Commission formally took up its mandate where it will chart the political and policy process of the EU for the next five years. For the first time, a woman holds the post as president of the European Commission, Ursula von der Leyen, but who is she?

Born Ursula Gertrud Albrecht in 1958, she grew up in Ixelles, a suburb located towards the south of Brussels. Her family name of Albrecht is originally from northern Germany, whose members have been prominent civil servants, politicians and businesspeople down throughout the centuries.

She initially studied economics at the University of Göttingen, the University of Münster and the London School of Economics (1977 – 1979). Afterwards, she switched to medicine at Hannover Medical School (1980 – 1987) and practiced until 1992 in there during which she acquired a PhD in medicine (1991). She married her husband Heiko von der Leyen in 1987 and later had seven children. After working as a housewife (1992 – 1996) in Stanford while her husband was employed in Stanford University, she returned to the Hanover Medical School to teach, and earned a master’s in public health in 2001. She is a native speaker of German and French and is fluent in English.

Her political career began in 2003 after being elected to the Bundestag for Lower Saxony in state elections, a seat she would retain until her nomination to be President of the European Commission in 2019. Although she entered politics later in life, she was no stranger to politics. Her father was the minister-president of Lower Saxony and the former director-general of the European Commission, among other posts.

Her last cabinet post was that of minister of defence (2013 – 2019), the first woman to hold this position. Despite the cabinet portfolio has traditionally been viewed in Germany as a “poison chalice”, she held the position for over five years. She introduced initiatives such as trying to make the German army more attractive to young families by offering crèches for soldiers’ children. She presided over a huge increase in Germany’s military budget, after years of severe cuts, and a big expansion of the army’s international deployments. But the poor state of the armed forces, with grounded aircraft, non-operational submarines and chronic staff shortages, is still legendary, according to Guy Chazan of the Financial Times.

What Now As President?

Ahead of von der Leyen’s confirmation by the European Parliament in July, she published a ‘Political Guidelines’ document the outlined her policy priorities as president of the European Commission. They are as follows:

The Guidelines outlined high-level commitments to introduce legislative proposals on social, environmental and economic policy, as well as steps to improve areas including inter-institutional relations and the EU’s international role. The Guidelines reflect a broad-based policy programme which includes a number of proposals and initiatives, particularly in regard to the environment. You can read up more on the new European Commission’s priorities here.

President von der Leyen has committed that the new set of Commissioners will each visit all of the EU Member States throughout their tenure. Today, Wednesday 15 January will see her visit Dublin for her first official visit to Ireland, where she will likely discuss the next stage of the Brexit negotiations, the new Common Agricultural Policy, funding for Northern Ireland and border counties, and the her Green New Deal.