Two ships passing in the night: Fisheries in Brexit

While the course navigated so far in Brexit is incomplete, the knotted issue of fisheries has being climbing the political ladder. Michel Barnier has stated that an EU – UK trade deal cannot be agreed without an agreement on fisheries. In this Just the Facts, we will explore why the EU’s Common Fisheries Policy (CFP) may cause Brexit talks to run aground.

The CFP, an exclusive competency since 1983, has four pillars that frame its objectives:

Two historical policy principles underpin much of the wider Brexit debate: that of equal conditions of access and relative stability. Since 1970, the former has allowed any fishing vessel flying the flag of a Member State to access the 200 nautical mile Exclusive Economic Zone (EEZ) of another. This was done to ensure that the 1973 accession states, with their fishery rich waters, accepted it as part of the ‘acquis’, Since 1983, relatively stability has set out catch limits, known as Total Allowable Catches (TACs), for stocks, which the EU agrees to annually for c. 90 TACs. 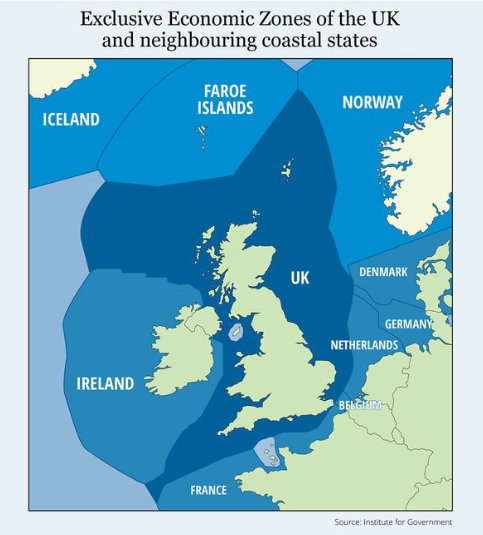 The failings of the CFP and its role in the 2016 UK EU membership referendum:

The CFP has a history of not living up to its objectives, as per academic research, such as “A study of failure” (2005), “Designed for failure” (2010). One core fault is the annual setting of TACs above the scientific advice. A publication from the New Economics Foundation found that between 2001 – 2015, TACs exceeded scientific advice between 33% to 7% over that period.

This and other failings of the CFP have been part of public debate on the policy for decades. The CFP was an easy source of fuel for arguments for the UK to leave the EU, with UK fishers a natural ally. They perceive a loss of control of UK territorial waters under equal conditions of access and what they see as the “unfair and disadvantaged the UK” where there are “gross anomalies in the quota share arrangements”.

A University of Aberdeen survey before the 2016 referendum found that 92% of UK fishers intended to vote to leave, with 65% holding a negative view of the EU. Some 59% believed that leaving would greatly improve the industry, with 52% anticipating that leaving would ‘somewhat increase the amount of fish they could catch’.

As fisheries is an emotive issue bound up in identity, it was easily plugged into the Leave campaign concept of “taking back control”, in this case UK territorial waters. As a result, it gardened significant coverage in international publications such as the New York Times. It culminated in the Fishing For Leave flotilla up the River Thames to Westminster the week before polling day.

Fisheries in the Brexit Negotiations:

The political and social saliency of fisheries has continued into the Brexit negotiations. Many fishers in Belgium, France, Germany and Ireland, fear being locked out of UK waters, where they often catch the majority of their fish, due to the CFP principles. For Ireland, some 60% of mackerel and 40% of prawns, key industry stocks, are caught in the UK. Their efforts often support economically isolated coastal communities, accounting for 81% of jobs in many fishing communities such as Castletownbere (West Cork) and 69% in Killybegs (Donegal).

Soon to be an independent coastal state, the UK will no longer be bound by the CFP, but by the UN’s Convention on the Law of the Sea. As a result, the UK will be able to control access to fish in its EEZ. At the same time, British fishers fear that in negotiations they will be sacrificed in favour of bigger economic issues. Considering for example that private detectives and veterinarians contribute more to the UK economy than fishing.

The EU has attempted to soothe the fears of EU fishers, ‘Fishing Opportunities’ feature in the October 2019 Revised Political Declaration (p 14 §§71-75). It states that before 1 July 2020 both the EU and UK shall develop “establish a new fisheries agreement on, inter alia, access to waters and quota shares.”

This was further fleshed out in the EU mandate to launch phase two of negotiations in February. It largely seeks to maintain the economic status quo for EU fishers. An EU – UK deal “should uphold existing reciprocal access conditions, quota shares and the traditional activity of the Union fleet.”

The UK, on the other hand in its 2018 EU – UK White Paper, stated that it “will seek to secure increased fishing opportunities”, by moving “away from the principle of relative stability” to zonal attachment. This involves setting a quota based on where a stock lives, breeds and spawns within an EEZ. A study by the University of Aberdeen suggests that it would increase its share in several key stocks.

To starboard or to port?

Progress around fisheries has been slow, with little sign of breakthrough when talks resume in June. Nonetheless, both support a system, defined by scientific advice, to jointly manage border–straddling stocks. Also, far from the UK closing waters entirely to the EU, it wants to recalculate access and stock shares.

At the same time, both sides are like two ships passing in the night, with no signal exchanged between them. An agreement is vital as history has shown how fishery disputes often spill into other political arenas.

The ‘scallop wars’ in 2012 and 2018 saw British and French fishing boats clashing in the English Channel, which drew considerable attention in light of Brexit. In rows with Scotland over Rockall and the arrest of Northern Irish vessels, fisheries make a swift ascent up the Irish political mast in 2019. Even the ‘cod wars’ between Iceland and the UK from the 1950s – 1970s brought strains to the NATO alliance.

While the economic weight of fisheries might only be felt in the coastal communities that depend on them, the political and diplomatic weight from the fallout from a fishery dispute should not be underestimated. This is important for the sustainable management of fisheries in a post-Brexit North-East Atlantic. However, while the UK is attempting to achieve more restrictive fisheries regimes in its waters for the EU, it is the case that some 70% in the value of British seafood exported goes to the EU. While the UK might want to catch more fish, an agreement with the EU is needed in order for it to sell what that highly perishable catch to its most important market.