Time to Stand Up for the Rule of Law in Europe 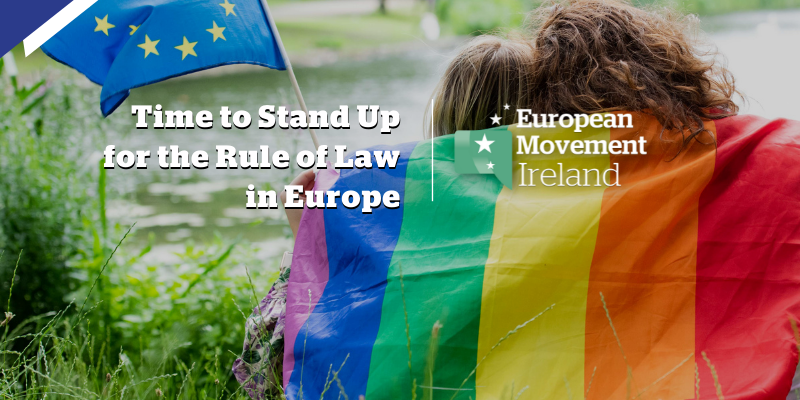 The rule of law within the European Union is under threat. At a time when the EU strives to defend this universal value globally, it risks being gravely undermined from within by some EU Member States.

The rule of law is a well-established principle of the international order and is entwined with the protection of human rights.

It is also enshrined in the EU Treaties as an explicit requirement and fundamental value and EU Member States are legally obliged to uphold it.

However, in recent years, governments in two Member States – Hungary and Poland – have mounted consistent challenges to these established principles. In both countries there are serious questions about the independence of parts of the judiciary, media organisations are threatened or closed, minorities – particularly the LGBTQI community – are subject to state harassment and civil society is under pressure.

Earlier this summer, the Hungarian parliament passed a law banning content that “promotes deviation from gender identity, gender reassignment and homosexuality” from being made available to minors. The effective result would be the exclusion of references to LGBTQI people or issues from educational materials, broadcast media or commercials aimed at those under 18.

Meanwhile in July, the second annual European Commission rule of law report highlighted serious challenges to the rule of law in Hungary and Poland in particular and also raised concerns regarding a number of other countries.

Threats to the rule of law in one part of the EU can have far-reaching effects in others. Courts in Member States, including Ireland, have raised concerns about extraditing suspects to Poland because of doubts about the quality of justice they would receive there. Moves against LGBTQI people mean they are deprived of their rights to equal treatment and protection anywhere in the EU.

The EU has responded to this threat to its values and its legitimacy in several ways. It has introduced a Rule of Law Framework under which the Commission makes an annual report and can issue infringement proceedings against offending Member States through the Court of Justice, a mechanism that has been used quite regularly.

Recently, following infringement proceedings, the Court of Justice ruled that the Polish Disciplinary Chamber of the Supreme Court violated EU law because of concerns over its independence and impartiality. The Polish government agreed in August to dissolve the chamber but continues to dispute the primacy of EU law. Germany’s federal constitutional court has also challenged the primacy of EU law, a fact not lost on the Polish authorities. The Commission has also taken proceedings against Germany.

Given the importance of upholding fundamental rights and the rule of law, Article 7 of the Treaty on European Union provides for action against any Member State which is deemed to be at “risk of a serious breach” of the rule of law. The Treaty also allows the European Council to decide where serious and persistent breaches of the rule of law exist and can also apply sanctions in serious cases, for example by suspending the voting rights of the relevant Member State.

Proceedings under this article were initiated against Poland in 2017 and Hungary in 2018. However, these actions have not yet concluded, perhaps because they would ultimately require the unanimous agreement of all Member States apart from the one accused of serious breaches. Hungary and Poland have decided to support each other and to block any move to suspend the others voting rights.

This has led the other Member States to seek new ways of bringing both countries back to respecting the rule of law. The EU recently decided to link approval of new EU funds to rule of law requirements. While this new mechanism is under scrutiny, the decision represents an important escalation of the EU response and a clear sign of the determination of the majority of Member States to insist on compliance

So, what more can be done?

Firstly, linking EU funding to the rule of law is an ambitious step and has the potential to become a significant future deterrent. The EU institutions must demonstrate their willingness to use this new tool as an effective sanction in future. The fact that the European Commission has yet to sign off on the first tranche of Covid-19 recovery funding to Poland and Hungary is a positive indication of a more robust approach.

Secondly, the EU should not dismiss using the Article 7 procedure and should at least bring the ongoing proceedings against Poland and Hungary to a conclusion. Even if unanimous agreement is unlikely, such a move would apply considerable pressure. Some may argue that such an approach would be divisive, but it would signal a clear willingness to insist on, and uphold, the core values of the EU.

Thirdly, the majority of Member States who see the rule of law as part of the core values of the EU need to maintain the pressure for change. Pan-European political parties and groupings should also exert pressure on their member parties in offending Member States to return to the wider EU shared values.

Finally, the ongoing Conference on the Future of Europe provides an opportunity to consider further improvements regarding the defence of human rights and the rule of law in the EU.

The values associated with the rule of law in Europe were hard won and must not be undermined by the actions of some EU governments. Those of us who believe in the future of the EU must speak out and defend these values.