The UK Internal Market Bill, what happens next? 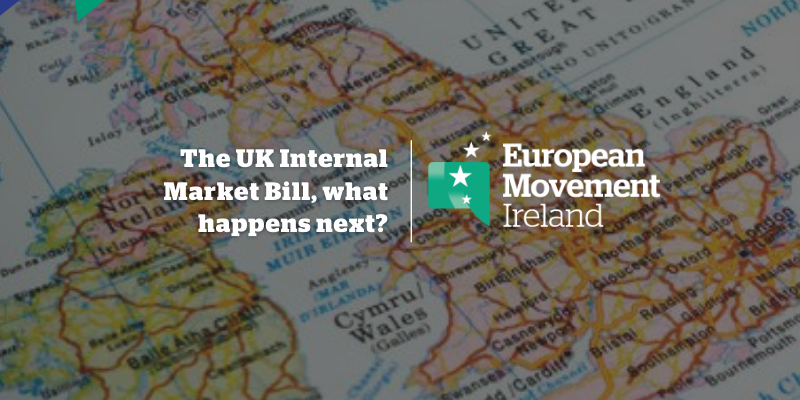 The United Kingdom Internal Market Bill contains controversial proposals that will override parts of the Northern Ireland Protocol. What path does it take through the UK legislative system? This Just the Facts explores the next steps in the parliamentary process of the bill.

What is the UK Internal Market Bill?

The Northern Ireland Protocol, contained in the EU – UK Withdrawal Agreement, outlines how Northern Ireland will remain part of the UK’s customs union but some EU custom rules will still apply to certain goods entering into Ireland, so that they can still move freely.

Under the Protocol, products and goods that move from Great Britain to Northern Ireland will only be subject to tariffs when they are “at risk” of moving into the EU (into Ireland, for example) afterwards.

As a result of the application of the Union Customs Code, it does mean that certain checks and processes will be required on goods moving between Great Britain and Northern Ireland.

This is all done to prevent a hard border on the island of Ireland. It also aims to protect the integrity of the EU’s single market, so that Ireland does not become a ‘back door’ for goods coming into the Union.

The bill, published on Wednesday, 9 September, includes provisions which the UK government state will maintain that trade between Great Britain and Northern Ireland will remain barrier-free, after the Brexit transition period ends on 31 December 2020.

How will the bill impact the Protocol?

Part 5 of the bill will empower UK ministers “to prevent the application of, and unilaterally re-interpret and disapply parts of the Protocol, as well as ignore their legal obligations under both domestic and international law to enact the Protocol.” It sets out to achieve this through a number of clauses.

Additionally, Clause 45 states that laws made by ministers under the bill cannot be found incompatible with international law.

What will happen next with the UK Internal Market Bill?

Despite calls from the EU to withdraw the bill, as it poses a serious challenge to ongoing negotiations and to the future EU – UK relationship, the UK government is pressing ahead with it through parliament.

With a majority of 77 votes, on Monday, 14 September, the bill passed through its first legislative stage in the Commons, in a vote which saw 340 votes in favour with 263 in opposition.

With this, a rebellion within the Conservative Party over the bill has been prevented, meaning that the bill will likely move through the House of Commons uninterrupted, a process that is expected to be completed on Tuesday, 29 September.

Next, it will move to the House of Lords and while many members there have criticised the bill, its primary role is to amend and improve any legislation, not to block. It is expected that members will debate it throughout the month of October and potentially into November.

Delaying the legislative process further will mean that any amendments that the House of Lords propose will have to go back to the House of Commons to be voted upon. This is a process that could last until early December.

All the while, the bill will loom in the background as EU and UK officials continue negotiations in a crunch period. Both Boris Johnson and the EU have stated that if a deal is not reached in October, there will not be enough time before the transition period ends on 31 December 2020 to conclude talks and allow the deal to be approved by the EU institutions and ratified in Member State’s parliaments.

Key dates in the Brexit timeline: