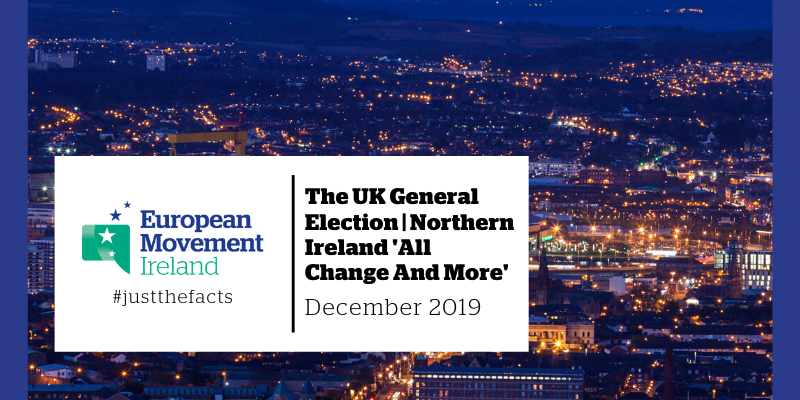 In Northern Ireland, ten parties fielded over a hundred candidates, across 18 seats. Brexit defined this election and it appears to have shifted voting behaviours across traditional party lines. How were parties impacted there, and how did they present Brexit in their manifestos?

Counting began immediately after polls closed at 22.00 in what was one of the UK’s most contentious general elections. In terms of Northern Ireland, the results for the 18 constituencies began trickling in from shortly before 02.00 and continued throughout the early morning. North Down was the first seat to be declared, while the last seat to be announced was Fermanagh & South Tyrone just after 07.00, due to a recount. In total, with an electorate of just over 1.2 million in Northern Ireland, turnout was 62.1%, which was a decline from 65.4% in 2017.

This is the first time since 2010 that they have gained a seat in the House of Commons, winning North Down which was previously held by the DUP. In total, the Alliance Party was able to obtain a 17% share of the vote.

Regarding Brexit, the Alliance Party’s manifesto outlined three preferences in descending order; that they support another referendum to reconsider Brexit, with remain as an option; that the whole of the UK should remain in the EU’s Single Market and Customs Union; and finally, that a special deal that helps Northern Ireland’s economy and defends the Good Friday Agreement.

Their manifesto states that “there is no such thing as a good or sensible Brexit – it is an act of huge self-sabotage. We want to stop Brexit but if Brexit is forced through, we want to minimise the harm.” During the 2016 referendum Stewart Dickson, the party’s then Europe spokesman, said “what is clear is that Northern Ireland benefits and continues to reap great rewards through membership of the European Union.”

While still the largest party from Northern Ireland to be elected to the House of Commons, the DUP lost two traditional unionist seats of Belfast North to Sinn Féin and North Down to the Alliance Party. The party had the largest overall share of votes at 31%.

In their election manifesto, the DUP stated that the democratic outcome of the EU referendum should be respected and believe that the UK should leave the EU as one country. They believe that no border should exist in the Irish Sea between Northern Ireland and Great Britain. The DUP believe that “the prism through which the DUP will judge each situation and vote is what is best for Northern Ireland economically and constitutionally within the Union.”

During the 2016 referendum, the DUP was the main party in the Northern Ireland Assembly to campaign for leave. After the result, leader Arlene Foster said that “no one wants to see a ‘hard’ Brexit […] we need to [leave] in a way that respects the specific circumstances of Northern Ireland, and, of course, our shared history and geography with the Republic of Ireland.”

The reduced number of candidates taking part was the result of a pact with some pro-Remain parties in Northern Ireland, resulted in a significant decline in its share of votes. For the general election, the party support a people’s vote, with remain as an option. They want to guarantee the rights of EU citizens living in the UK, ensure free movement of people and to negotiate access to the EU’s Single Market for Northern Irish industries. And they want to maintain the current level of EU environmental, human and workers’ rights that currently exist.

It campaigned to remain in the EU in the 2016 referendum, while at the same time acknowledging that they are content with the status quo. “Rather, we recognise the benefits that being part of the EU has brought about but acknowledge that change needs to be made. However, it is only by voting to stay in that we can make change.”

Although PBP has contested elections in Northern Ireland since 2007, it would not be until 2014 and 2016 that the party would be successful at local and assembly elections, respectively. They supported a Leave vote in the EU referendum.

In their general election manifesto, the party is opposed to no-deal Brexit, believing that a hard border “and a Tory Brexit that will lead to a race to the bottom.” They argue that the October Withdrawal Agreement could entrench sectarianism in the Northern Ireland assembly. They oppose a post-Brexit trade deal with the US, as it would lead to an erosion of public services. “The clash between the EU and Britain is helping to re-open the question of the border and partition. People Before Profit want a 32-county socialist Ireland.”

For the first time since the 2010 general election, the SDLP will be sending MPs to the House of Commons, where it was able to achieve a 17% overall share of the vote.

The SDLP manifesto’s key points on Brexit in the general election focused on revoking Article 50. However, if necessary they will campaign for another referendum, with remaining an option. They want to maintain the free movement of people, goods and services under the EU’s Single Market and the common travel area after Brexit. The SDLP oppose any hardening of the Irish border in violation of the Good Friday Agreement and want to secure human and workers’ rights and protections that are sourced from EU legislation. The SDLP highlight in their manifesto that “people here know that the European Union has played a central role in our peace process, providing constitutional comfort and critical resource to stabilise our new society.”

SDLP leader Colum Eastwood said at the time of the 2016 referendum that it is “one of the most important votes faced by people in Northern Ireland in decades […] it is therefore vital that a strong and positive campaign is conducted to remain in Europe” he said.

Sinn Féin was able to secure Belfast North, a traditional unionist stronghold, from the DUP in this general election, where their overall share of the votes was 23%. In Sinn Féin’s election manifesto, they state that “there is no good Brexit” and oppose it. They believe that the Good Friday Agreement must be protected in any future Brexit deal between the EU and UK. The party believe that Northern Ireland should have a special status post-Brexit, and that unionists should not have a veto. They also want Northern Ireland to automatically re-entre the EU in the event of Irish unification taking place. Their manifesto states that by voting “for remain candidates in this election is again about sending a message about which union you want to belong to; Ireland in Europe or Britain.”

At the launch of their campaign to vote Remain in the 2016 EU referendum, the then Deputy First Minister Martin McGuinness said that the EU “is far from perfect but the only way to address that and change it is from within. Our policy towards the European Union remains one of critical engagement.

While the UUP were able to increase their share of votes to 12% in this general election, they were unsuccessful in electing any candidates. In their election manifesto, the UUP believe that the October Withdrawal Agreement will be “disastrous for Northern Ireland and disastrous for” the UK. They believe that “maintaining the Union of our nation will always take precedence over securing Brexit at any cost… We joined the EU as one, we leave as one, or we remain as one.” Following a vote by the party to campaign in favour of remaining, then UUP leader Mike Nesbitt said that “if you cherish the United Kingdom of Great Britain and Northern Ireland it is a good thing to vote remain.”

For the first time, Aontú ran candidates in this general election with seven taking part, obtaining just over 8,500 votes. According to their website, the party are in favour in “the development of a strong All-Ireland economy as a remedy to Brexit uncertainty.” The Traditional Unionist Voice did not contest any seats. The Northern Ireland Conservative party ran four candidates gaining just over 5,400 votes; UKIP had two obtaining over 600 votes; while four independent candidates gained just over 1,600 votes.

Conclusion: Next Steps In Brexit

The result of this general election is a working majority of 38 in the House of Commons for the Conservative Party, with 364 MPs elected. This can be compared to the outcome in 2017, which left the Conservatives short eight. With a working Conservative majority, the previous parliamentary deadlock that had plagued the Brexit process to date has been largely removed. It is likely that after Christmas break, the Withdrawal Agreement bill will be able to pass through parliament, facilitating for the UK to formally exit the EU on 31 January 2020. If this does take place, formal negotiations on the next phase of the Brexit trade talks will likely commence in February. However, the deadline to complete these talks is 31 December 2020, with many predicting it highly unlikely to conclude a comprehensive trade dead by then. A one off extension of two years can take place however, political agreement between the EU and UK is required by July in order for it to come into force. As a result, while the British general election has had a conclusive outcome, the same cannot be predicted for Brexit in 2020.