The State of the European Union 2021 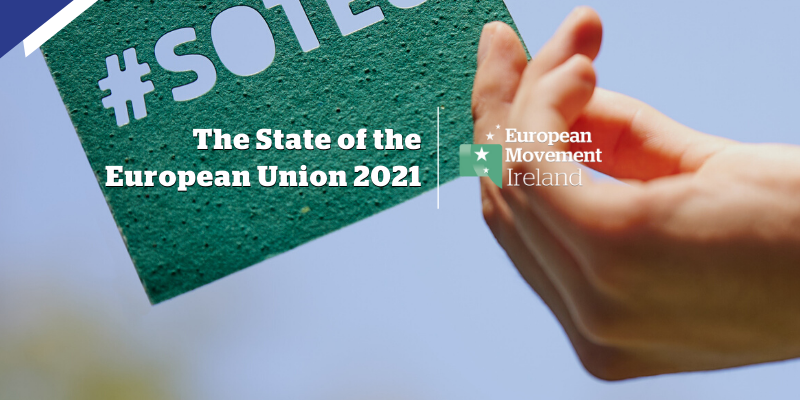 The EU has faced many challenges over the past year including the effects of climate change, the evolving situations in countries such as Belarus and Afghanistan, disputes relating to the Northern Ireland Protocol and the continuing Covid-19 pandemic. These and others, will likely feature in European Commission President, Ursula von der Leyen’s annual State of the Union address this week on Wednesday 15 September.

What is the State of the Union address?

The State of the Union, also referred to as the SOTU address, is given annually by the President of the European Commission to the European Parliament plenary session in September, as outlined in the 2010 Framework Agreement. This aimed “to strengthen the political responsibility and legitimacy of the Commission” and improve the working relationship with the Parliament.

The SOTEU is specifically mentioned in Annex IV(5) of the Agreement where: “Each year in the first part-session of September, a State of the Union debate will be held in which the President of the Commission shall deliver an address, taking stock of the current year and looking ahead to priorities for the following years.” The year’s SOTU address will be the eleventh such address, with José Manuel Barroso having delivered the first in 2010.

Before MEPs, the Commission President will often look back at events, challenges and accomplishments that have taken place over the previous 12 months by the EU. The SOTEU will then look towards the coming 12 months by referencing the work programme that the Commission will be setting out for the year ahead, including legislative proposals or policy launches, initiatives and other items.

Following this, the Commission President will engage in a debate with MEPs on the contents of their speech and other issues relating to the EU, all of which will be broadcasted live online and elsewhere.

In her 2020 State of the Union last September, President Ursula von der Leyen focused on the Covid-19 pandemic and how the EU had navigated its way through the early stages of the pandemic. She emphasised the EU’s rapid response to the health crisis, the need for economic recovery and the role the EU played in acting on various global issues including climate action and migration.

President von der Leyen acknowledged the uncertainty arising from the pandemic, while paying tribute to the resilience of people in Europe, referring particularly to the commitment of front line and care workers who “have shown how strong that human spirit really is”.

She highlighted the opportunity for Europe “to make change happen by design” in spite of the pandemic, highlighting the EU’s €750 million flagship recovery package NextGenerationEU, which intends to mitigate the economic and social impact of the pandemic “to build a more resilient, sustainable, fair and prosperous Europe”.

NextGenerationEU integrates into the Commission’s ‘Fit for 55’ Package, enabling the EU to achieve the ambitious goals of the European Green Deal and progress towards climate neutrality in 2050. European Movement Ireland recently produced an explainer on the ‘Fit for 55’ Package, that is can be read hereavailable here to read.

The 2020 State of the Union shared a central theme with the President’s previous address, that of unity. This theme has been incorporated into the programme for the current Slovenian Presidency of the Council of the EU, entitled “Together. Resilient. Europe.”

As Europe emerges from the Covid-19 pandemic, President von der Leyen is likely to reiterate the strong call for European solidarity in light of the EU’s recovery from the recent economic and health crises and remain “United in diversity and adversity.”

President von der Leyen is expected to discuss the EU’s progress on the green and digital transitions, strengthening the Single Market and the state of EU external relations considering the many geopolitical challenges it faces.

The EU’s commitment to the Green Deal and the digital transition remains at the core of the Commission’s priorities set out in back in 2019.

Where can I watch the SOTEU?

The address will be broadcast live online from 8am (Irish time) on Wednesday, 15 September 2021. More information about how to follow and watch the SOTEU can be found here.

On Wednesday, 8 September, European Movement Ireland together with the European Parliament Liaison Office in Ireland and the European Commission Representation in Ireland, hosted an interactive webinar with stakeholders and MEPs about their expectations of the 2021 SOTEU.

In his address as part of the webinar, Stephen O’ Shea said, “The Conference on the Future of Europe is the opportunity to determine what the EU might look like in the next five, ten, twenty years. We at European Movement Ireland are engaging with citizens across the country and beyond. People are committing their time and ideas to this process, and they must be listened to. We would like to see the President committing to acting on the proposals that emerge from the Conference and championing its potential.”

The webinar is available to watch back in full here, with all of European Movement Ireland’s past webinars and podcasts can be found on the EMI Player here.