The Rule of Law in the EU 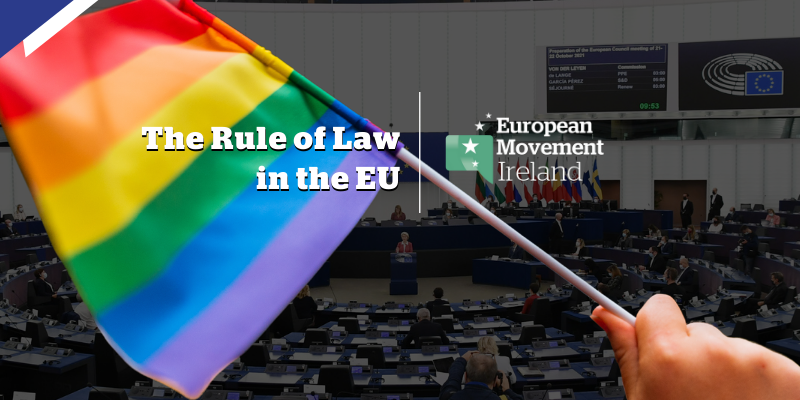 What is the Rule of Law in the EU?

In its 2020 Rule of Law Report, the European Commission outlined that the rule of law is where “all public powers always act within the constraints set out by law, in accordance with the values of democracy and fundamental rights, and under the control of independent and impartial courts.”

Article 2 of the Treaty on European Union (TEU) states that “The Union is founded on the values of respect for human dignity, freedom, democracy, equality, the rule of law and respect for human rights, including the rights of persons belonging to minorities”. However, democratic backsliding has taken place within the EU over the last decade.

How does the EU protect the Rule of Law?

Since 2014, the EU has expanded its ‘toolbox’ of instruments that can be used when Member States breach the rule of law: the Rule of Law Framework, Article 7 TEU, infringement procedures, and the Conditionality Mechanism.

Established in 2014, this instrument facilitates structured dialogue with a Member State if there are “clear indications of a systemic threat to the rule of law”. Following an assessment by the European Commission, it produces a recommendation if it has found that there is “objective evidence of a systemic threat and that the authorities of that Member State are not taking appropriate action to redress it”.

However, if the Commission is unsatisfied in its recommendations, it can activate Article 7 TEU. The following graphic explains the processes of the Rule of Law Framework (Source: European Commission) 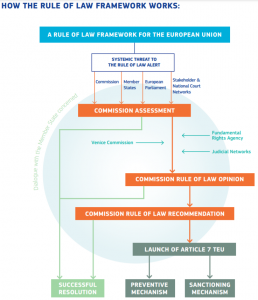 January 2016 was the first time the Commission initiated an assessment under the Framework. It related to Poland, particularly two laws on the power of the constitutional court and on the management of state TV and radio broadcasters. However, in December 2017, after assessments the Commission found “new concerns […] with regard to the rule of law in Poland”, whereby it activated Article 7(1).

Article 7 TEU allows for “a procedure in the event of a breach of Article 2” which “can lead to sanctions” against a Member State. It has two parts, the ‘preventive mechanism’ under Article 7(1), which aims to determine a clear risk of a violation of Article 2 TEU, and the ‘sanctions mechanism’ under Article 7(2 – 3), that seeks to determine the existence of “a serious and persistent breach of values in Article 2 TEU”. Both Article 7(1) and 7(2 – 3) are independent of one another.

Article 7(2) outlines the process by which the Commission, the European Parliament or one third of Member States can propose that a breach of the rule of law has taken place. It is then for the European Council to determine the existence of a serious and persistent breach by a unanimous decision, minus the relevant Member States. This can result in the suspension of voting rights.

The following graphic further explains the processes of Article 7(1) and (2 – 3) (Source: European Commission). 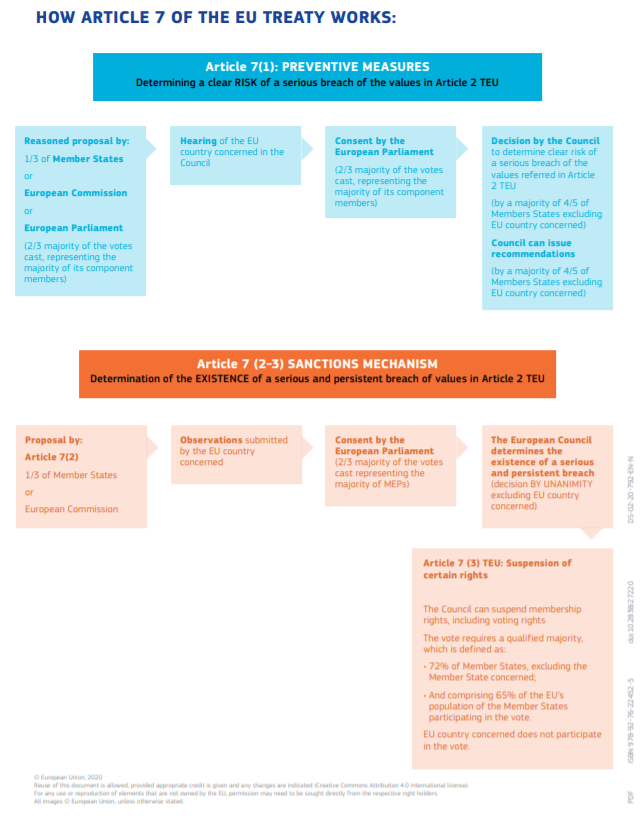 Article 7(1) was activated in relation to Poland in 2017 (see above) and also in relation to Hungary in 2018, following European Parliament “concerns about freedom of expression, academic freedom, the rights of minorities and refugees and other issues”. Both actions remain open and have yet to be concluded by the Council. Article 7(2) has never been used.

The following text outlines the stages of an infringement procedure (Source: European Commission) 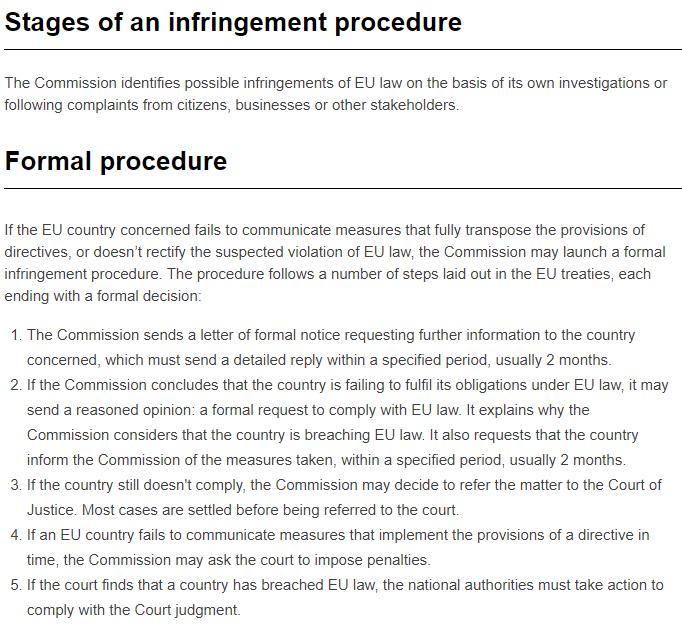 Recently, in relation to the Polish judiciary, the Commission considered that a disciplinary chamber of Poland’s supreme court infringed EU law. It launched infringement proceedings against Poland at the CJEU, and in July 2021 the Court ordered Poland to suspend the chamber. In October 2021, the CJEU issued a daily fine of €1m on Poland until it complied with the July judgement.

The conditionality mechanism, entered into force on 1 January 2021, making it possible to protect EU funding from breaches of the rule of law in a Member State that “seriously risk affecting the sound financial management of the Union budget or the protection of the financial interests of the Union in a sufficiently direct way.”

The conditionality mechanism has not been formerly triggered by the European Commission. However, it has yet to release funding to Hungary and Poland from the €806.9b NextGenerationEU Covid-19 recovery plan, amid concerns around the rule of law.

The rule of law is increasingly dominating the EU’s agenda and has been a focal point of recent European Council meetings. The serious issues that persist in some Member States have led to calls for a more robust defence of the rule of law by the European institutions.