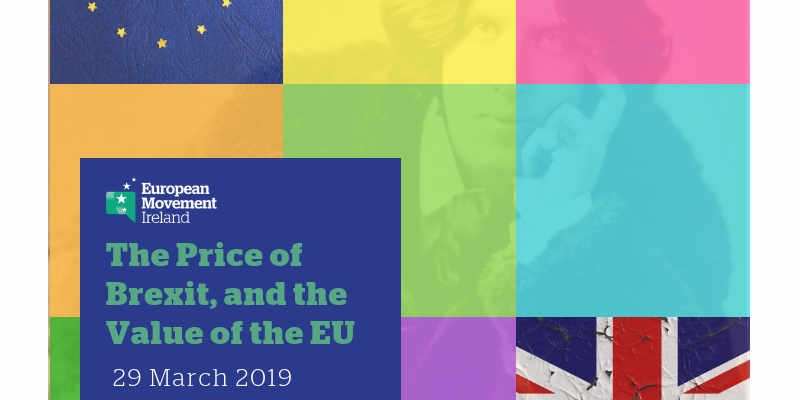 The weekend just gone was supposed to be Brexit weekend. But the UK government and the EU agreed at a recent summit to shift the Brexit date to at least April 12, and perhaps longer depending on what happens at Westminster.

Even so, it is worth reflecting on the lessons of Brexit since the 2016 referendum.

It is not easy to sum up those lessons in one pithy phrase. But Lord Darlington’s description of a cynic in Oscar Wilde’s ‘Lady Windermere’s Fan’ comes to mind: “A man who knows the price of everything and the value of nothing.”

As the UK learns the price of Brexit, the EU has shown its value to Ireland.

The looming spectre of a no-deal Brexit indicates its potentially heavy price. In that scenario, the EU would immediately classify the UK as an outsider.

Concretely, that would mean the UK would leave the EU with no legal framework to continue trading smoothly as today, for example.

As businesses in Ireland already know, that in turn would cause huge socio-economic disruption.

Even if things go smoothly, meaning the UK leaves with a withdrawal agreement, the eventual EU-UK trade deal will probably be the first international commercial accord in history to increase barriers to trade, rather than reduce them.

But the price of Brexit goes beyond the economic costs so far for the UK, such as multinational companies moving to Ireland, not to mention potential future economic costs.

At its core, the idea of Brexit may appeal in principle to many for a variety of reasons, but in practice it is riddled with contradictions.

This is because Brexit involves a very difficult trade-off between an outdated “us-alone” vision of political independence and global influence, in a world where prosperity and security are increasingly inter-dependent.

True, the post-Brexit UK could align itself closer to the United States, as some ultra-Brexiteers wish. But that would not be “taking back control”, it would be handing it over to Washington – the UK would have no vote at the American table, in contrast to its seat at the EU decision-making table in Brussels today.

The idea that ‘global Britain’ could choose between Europe and the world defies geography. UK goods exports to Ireland are currently worth more than those to China. Moreover, the idea that the UK would have more influence on global affairs by going alone defies reality.

As the old diplomatic adage puts it: “If you’re not at the table, you’re on the menu”.

Perhaps the biggest cost of Brexit will be for UK domestic politics.

[As first published in the Irish Independent on 1 April 2019]

That domestic divisions are deep is shown by the recent machinations in Westminster, with Parliament taking control of the Brexit agenda from the government, while calls for going back to the people grow louder. All this suggests that Brexit is not only revealing a political crisis, but perhaps also a constitutional one.

Conversely, the EU has shown its value to Ireland during the Brexit process.

First and foremost, it has been seen through the impressive solidarity of the other 26 remaining EU governments on the need for a “backstop” to protect the peace process on this island.

Protecting a peace process comes naturally to the EU, since it was created to build peace between previously warring countries through a process of socio-economic interdependence.

The first is that EU membership matters, and at least 21 EU members could be classified as ‘small countries’ like Ireland.

So, even though the UK is a major Nato ally, geopolitical priorities for France, Germany and others mean that the interests of an EU member (in this case, Ireland) must come before the interests of a soon-to-be non-member (the UK).

The second reason is that EU governments agree the single market must be protected at all costs.

The single market is the one bit of the EU that all members sign up to, not all are in the euro or all aspects of foreign and security policy co-operation, for example. The arrangements in the ‘backstop’ provide for the UK to either remain in a customs union with the EU, or to introduce more port checks between Britain and Northern Ireland (there are some already, for example, for livestock).

It would be much easier to protect the single market with port checks between Britain and Northern Ireland, as the backstop would require, than along the 500km land Border, which is probably impossible to police. This combination of factors might explain why the other EU governments have not thrown Ireland under a bus, despite all the noise at Westminster.

The EU shows its value to Ireland in other ways too.

The EU single market (not including the UK) is currently worth more for Irish goods exports than the UK and US combined.

Figures from the Central Statistics Office show that during 2018, the EU accounted for around 40pc of Irish goods exports, compared with the US on 28pc and the UK on only 10pc. Since Ireland’s economy depends on exports, it also helps that Ireland is a member of a major player in setting global trade rules, namely the EU.

The Brexit process has been, and will remain, challenging for Ireland, but it has shown the value of EU membership.