The Landbridge, Ireland and Brexit

As the Brexit deadline clock continues to count down, an issue that has raised its head again is of Ireland’s continued use of the UK Landbridge post-Brexit. A recent Twitter thread by our Policy and Brexit Research Officer, Ciarán O’Driscoll, highlighted some of the key issues around this important aspect of Brexit, which will be presented here.

What is the UK Landbridge?

The UK Landbridge refers to how businesses access Britain’s port and road networks in order to move trade to and from Ireland and the European continent. Possible routes include travelling by ferry between Dublin to Heysham, Holyhead or Liverpool, then travelling by road to Dover, before reaching Calais by ferry.

Why do businesses do this?

While it is the only other Irish port involved in the landbridge, Rosslare-Europort’s sailing times are not as frequent, whereas Irish Ferries and Stena Line Ferries offer up to four return sailings per day. It also takes slightly longer to get to Fishguard (four hours) and Pembroke (five hours). Remember, the frequency of sailings is often driven by demand.

2018 data from the Irish Maritime Development Office (IMDO) show that demand is with Dublin, as the Central corridor dominates freight movements. 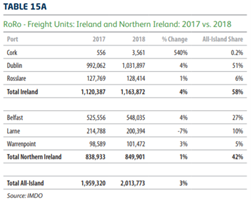 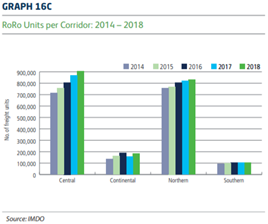 So what is the winning Landbridge formula?

All four factors facilitated an ease by which businesses could move up to 40% of Irish trade, which equates to about 150,000 lorries, according to a 2018 report from the IMDO on this issue.

The impact of Brexit

Brexit will cause a major upheaval of what has been a stable trade route in and out of Ireland for some thirty years. Recent headlines, such as a new report in the Financial Times of up to 7,000 lorries at Dover highlights how this will impact those in Ireland who use the Landbridge.

What about direct services to EU and the ‘Brexit-busting’ ships?

While the likes of CLdN’s MV Celine exist and will be important no matter what the shape Brexit arrives in, data from the IMDO highlight a key trend. Graph 16C (see above) shows how the uptake in businesses utilising those direct routes to the EU is much lower compared to other corridors.

The issue again is time. Its takes c. 40hrs for that ‘Brexit-busting’ ship MV Celine to go Dublin – Zeebrugge in Belgium, compared to c. 20hrs via the Landbridge. While you can get to Cherbourg in roughly same Landbrdge time, the frequency of services is lower due to the time it takes to do a return sailing. For example, Irish Ferries provide five or six return sailings a week from Dublin to Cherbourg, compared to Holyhead where there are eight per day. 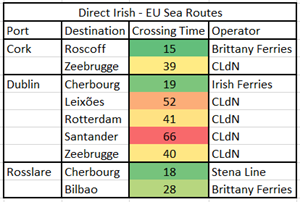 What will the potential disruption from Brexit mean?

The biggest issue here is how much time will be lost and what the threshold businesses are willing to take will be? “If you lose a day, you lose a market” as is said. Time is vital for businesses and supply chains, as Simon Carswell reported in the Irish Times in 2018, when he travelled the entire Landbridge.

How do we respond?

In response to these uncertainties, some have called for more routes to France, as it is our closest EU neighbour, and more capacity on routes.

To the first point, those plans are already afoot. A Memorandum of Understanding was signed in 2018 between French and Irish seaport associations.

On the second point, Minister of State for European Affairs, Thomas Byrne TD has stated that: “Operators have indicated to govt that capacity is available on direct routes.” This is the case with direct routes to the EU, where capacity has been added already on existing routes, or new routes added.

So, it’s all plain sailing?

We don’t yet know the final outcome of Brexit negotiations. Therefore we don’t know the extent of any potential disruptions, it is also the case that some sectors (such as agri-food and seafood products) have no other option but to use the Landbridge due to time sensitivities of their products.

The Landbridge, that worked so efficiently for Ireland as a result of our and the UK’s common EU membership, now faces serious disruptions as a direct result of Brexit.