The European Green Deal – What does it mean for Ireland? 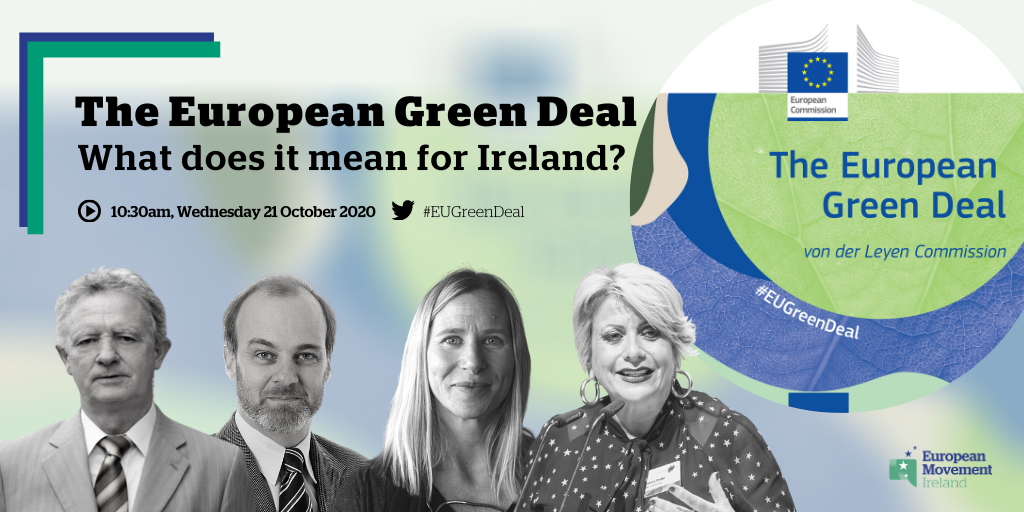 The European Green Deal – What does it mean for Ireland?

Dublin, 21 October 2020:  The European Commission Representation in Ireland, in co-operation with European Movement Ireland held an online event this morning entitled ‘The European Green Deal – What does it mean for Ireland?’ Speakers included Joanna Drake, Deputy Director-General, DG Environment, European Commission; Karen Ciesielski, CEO, Irish Environmental Network and Jonathan Derham, Head of Programme Office of Evidence & Assessment, Environmental Protection Agency and was moderated by Gerry Kiely, Head of the European Commission Representation in Ireland. The speakers explored the national and international implications of the EU’s ambitious environmental programme. The programme, which is centred on the efficient use of resources and the creation of a clean, circular economy, seeks to ensure that the EU will be climate neutral by 2050. Over 260 people across Ireland logged in to the online event showing the interest in and importance of the European Green Deal to people across Ireland.

Joanna Drake, Deputy Director-General, DG Environment, European Commission commented ahead of the event, “One month ago, in her State of the Union address, Commission President von der Leyen referred to the strength of the human spirit and the fragility of life, which the Corona crisis has revealed to us. The New Green Deal aims to set out a pathway not only to protect our planet, but also to find a new and better way to approach economic development. I am very much looking forward to hearing how this is being implemented in Ireland.”

Karen Ciesielski – CEO, Irish Environmental Network said, “The European Green Deal is going to be an essential part of how we change our climate and biodiversity trajectory here in Ireland. We’ve had a detrimentally poor record to date, but we now have the opportunity to course correct long-standing failures. We can, and we should, be a key player in this European-wide effort towards becoming a fairer, healthier and climate-resilient society.”

Jonathan Derham, Head of Programme Office of Evidence & Assessment, Environmental Protection Agency said, “The EU Green Deal policy area has the potential to significantly alter investment and public finance decisions in Ireland, as well as production and consumption decisions, in ways that promote resilient and sustainable economies and societies. It is imperative as we emerge from the pandemic crisis in Ireland and look to stimulate economic recovery that we do so through a ‘green investment’ lens and so avoid recovery and growth promoting technical and infrastructural spend that locks us into carbon intensive and otherwise unsustainable consumption and production behaviours and technologies.”

Gerry Kiely, Head of the European Commission Representation in Ireland commented, “The global challenge of Covid-19 serves as a warning as to mankind’s fragility when confronted by disease and natural disasters. The clock is ticking on climate change: the implications are disastrous and totally foreseeable if not urgently addressed. The Green Deal offers us an opportunity to address this challenge in a way which is both environmentally and economically positive.”

CEO of European Movement Ireland, Noelle O Connell said that the European Green Deal, “represents a crucial development in the global effort to combat climate change and environmental degradation. By committing to the policies outlined in the Green Deal, Europe is leading by example and establishing a path for others to follow. Indeed, by setting standards for sustainable growth and by engaging with international partners, Europe has the ability to promote the green transition at a global level. Further, Europe’s intention to become the first climate-neutral continent has benefits that extend beyond environmental preservation and protection – a ‘greener’ economy will generate employment opportunities and promote growth. The European Green Deal will be a central component of Europe’s economic recovery from the COVID-19 pandemic.”

The event can be viewed on the EMI Player.