The EU Budget: What’s Next? 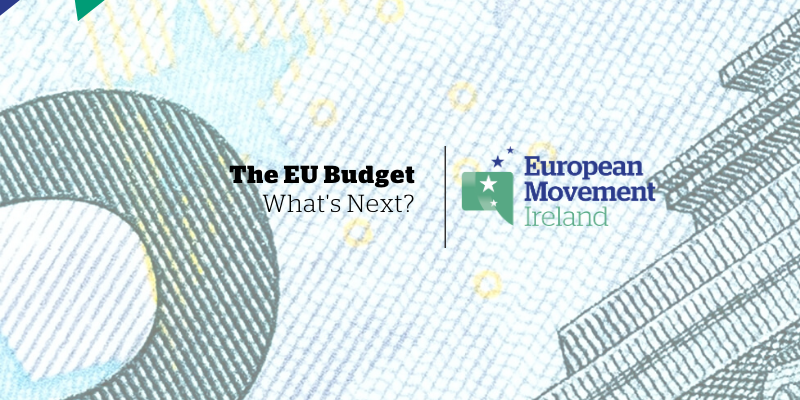 Back in February 2020, the EU was unable to reach agreement on the upcoming Multiannual Financial Framework (MFF) 2021-2027. The key issues that shaped the debate then were the loss of the UK’s contribution to the MFF of around €75 billion, climate change and migration. Now, following an unprecedented period of economic turbulence as a result of Covid-19, the MFF has entered a new dimension in which it is set to become a leading tool in the recovery of the EU. The extent to which the MFF can play a role in the EU’s economic recovery will, however, depend on whether or not Member States reach an agreement.

As these negotiations continue under new pressures from the fallout of the Covid-19 crisis, clear divergences between different groupings of Member States are emerging. These include the more financially ‘frugal’ countries, verses those who wish to see the EU play a bigger financial role in the recovery, as well as debates on the methodology of allocating funding. If the EU27 are to negotiate an agreement on the MFF that will ensure a strong and equal recovery for the EU, it will require great levels of political will, compromise and solidarity from all parties.

What is the new proposal?

The updated proposed budget which is being presented along with the €750 billion ‘Recovery Fund’, will be worth €1.1 trillion over the year 2021 – 2027. This figure reflects the usual compromise associated with the EU budget process, currently slightly below the €1.135 trillion MFF proposal in 2018, but slightly above the €1.095 trillion proposed in February 2020. Covering seven policy priorities, this particular proposal places an emphasis on economic recovery, climate and digital transformation.

The ‘Recovery Fund’ will be in place until 2024 and will supplement MFF funding across many policy areas. Most of the Fund’s €750 billion is proposed for the ‘Recovery and Resilience Facility’ and ‘Regional Development and Cohesion’ as part of the ‘Cohesion and Values’ policy heading. Of this €750 billion, €500 billion consists of grants which will be a contentious issue for some Member States as grants, unlike loans, do not require repayment.

As Covid-19 had a disproportionate impact on different EU countries, it is proposed that the allocation of EU funding factors in the economic damage done to a country and their financial stability. The more fiscally conservative Member States may wish to ensure strong “conditionality” measures, meaning that grants awarded must be used for specific investments that align with the EU’s aims. However, Member States that were involved in the EU bailout from the 2008 financial crisis may be less receptive to strong levels of conditionality.

How will it be funded?

The MFF itself will be funded primarily by Member States contributions, whereas the financing behind the additional €750 billion temporary instrument is slightly more complex. The Commission have proposed financing this by borrowing up to 2% of EU GDP on the markets, with the €250 billion in loans being guaranteed by the EU, meaning that in the event of a Member State’s failure to repay a loan, the debt will be shared by the EU27. With regard to the joint repayment of debt, some of the more frugal Member States have expressed their relief that it would be a one-time gesture with a clear end date.

When it comes to repaying the borrowed money, President of the EU Commission Ursula von der Leyen has suggested a number of potential options. One is to increase Member States’ contributions over the coming decades and use the MFF as a mechanism to repay the borrowed money. Another option is to introduce new revenue streams, such as taxes on large corporations, digital tax or a variation of a carbon tax, that would be payable directly to the EU. While Member States’ opinions on the above options may differ based on their economic outlook and current contribution to the EU budget, Ursula von der Leyen has stated that she believes that it is ‘’in common European interest to build up new own resources in a way that we have a stable way to pay back.’’

At the recent European Council of 18 – 19 June, the divergence of opinion between certain groupings of Member States remained stark, as the heads of state of the EU27 simply reaffirmed their original positions on the MFF. The looming questions over the size, composition and financing of this recovery package are likely to be next discussed at an in-person European Council summit on 17 – 18 July. Although it is still unclear how these significant differences of opinion will be resolved, many EU leaders have expressed their desire to reach an agreement by the end of July, as the EU begins to recover from the pandemic. As the proposal must be ratified by all Member States, compromise and a shared sense of solidarity on the current proposal will be critical to its success.