As the COVID-19 crisis developed across the EU in February and March, much attention has been given to the closure of land border crossings and to the suspension of air travel across the EU. The European Commission has responded by introducing measures to mitigate this, as explored in a recent EM Ireland ‘Just the Facts’ publication. However, little attention has been paid to our maritime and port networks and the role the EU has played in supporting maritime services during the pandemic.

The Island of Ireland’s Port Network

The island of Ireland’s peripherality to the European continent is an ancient issue, but one that has been bridged by our seaport networks and connectivity through the UK Landbridge. The importance of ports to the economy can be explored the volumes of port traffic data obtained from by the CSO and Eurostat for Ireland in 2017.

The movement of this trade to and from this island is done so through a port network of around 15 commercial ports that form critical pieces of infrastructure as access and exit points. In Ireland, the National Ports Policy of 2013, introduced a clear categorisation of the ports, as outlined below, in addition to the main commercial ports in Northern Ireland. 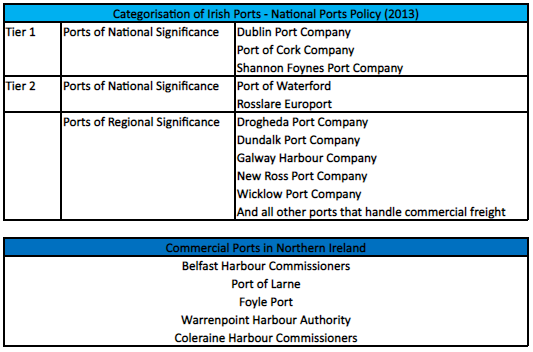 However, different ports handle different port traffic, which are primarily Break Bulk, Dry Bulk, Liquid Bulk, Roll-on/Roll-off (RoRo) and Lift-on/Lift-off (LoLo). Definitions of these maritime market segments can be found on p. 40 of the Irish Maritime Development Office’s (IMDO) 2019 annual report on port traffic on the island of Ireland.

The report highlights how Shannon Foynes handled 52% of all Dry Bulk goods in 2018, Cork handled 44% of all Liquid Bulk and Break Bulk at 22% in Ireland. However, in Northern Ireland, it is much more concentrated with Belfast accounting for 78% of Dry Bulk, 81% of Liquid Bulk and 56% of Break Bulk in 2018.

The other two remaining market segments of LoLo and RoRo carry the considerable portion of exports and imports and are therefore considered in an all-island context. IMDO data from 2018 reveal the importance of Dublin as it handles a majority of both LoLo (58%) and RoRo (51%) traffic for the entire island. Belfast is placed second here both for LoLo (18%) and RoRo (27%).

The EU’s role in maritime transportation has evolved since 2000 when European ports became part of the Trans-European Transport Network (TEN-T). Since 1996 TEN-T has aimed to “close gaps, remove bottlenecks and technical barriers” in European infrastructure, such as for maritime shipping routes.

While TEN-T had identified core corridors in order to channel funding efforts in meeting these broad policy demands, Brexit has brough new challenges around Ireland’s continued connectivity to the EU. As outlined below from a 2016 European Investment Bank publication, Ireland sits within the purple North Sea – Mediterranean corridor, highlighting the importance of the UK Landbridge, which was explored in a recent IMDO publication.

A realignment on the North Sea – Mediterranean corridor has resulted in the Tier 1 ports of Cork, Dublin and Shannon Foynes being linked directly to ports in northern France, Belgium and the Netherlands. Additionally, those three Tier 1 ports are now part of the yellow Atlantic core corridor, linking those ports to French ports such of Le Havre and Nantes Saint-Nazaire. 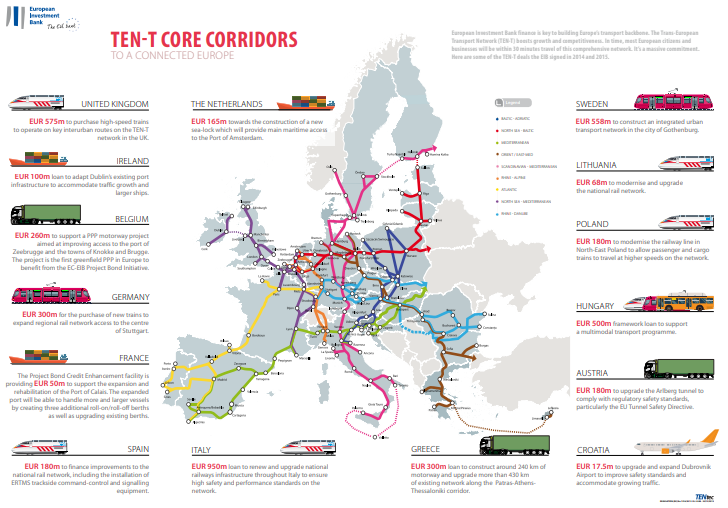 In order to meet the challenges of COVID-19, on 13 March 2020, the European Commission allowed for a temporary relaxation of state aid. This facilitated Ireland on 7 April to designate €15m in financial assistance for five strategic maritime RoRo routes for a period of up to three months. These routes are Dublin – Cherbourg (Irish Ferries), Rosslare-Europort to Bilbao (Brittany Ferries), Cherbourg (Stena Line), Fishguard (Stena Line) and Pembroke (Irish Ferries). A full list of all RoRo routes from the island of Ireland across the four corridors is presented below.

It was announced by the Department of Transport, Tourism and Sport that this “support package […] will be targeted at compensating the gap between specified costs and revenues generated on the services.”

Further to this, the Northern Ireland Executive announced on 25 April that is it to provide financial support to all five RoRo routes that operate from Northern Ireland, at a cost of between £10.6m (€12m) and £16.6m (€18.3m). In the Belfast Telegraph Seamus Leheny, regional director of the Freight Transport Association, which represents hauliers, said that “ferries are an essential tool in making sure supplies of critical goods keep moving but, like many other sectors, have been hit hard by the outbreak. The recognition of the crucial importance of sea freight to the NI and GB economies cannot be underestimated and the desperately needed funding will reinforce these key ferry routes.” 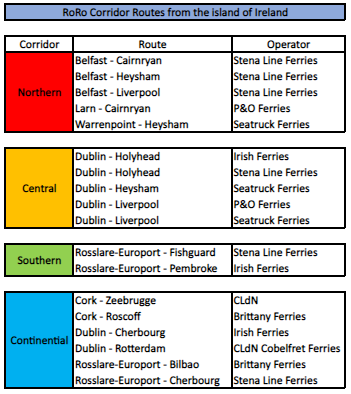 These interventions reflect the strategic importance of maritime routes on this island and avoiding disruptions to such routes. The impact of such disruptions was observed in April when P&O Ferries’ RoRo vessel the Norbay was detailed in Liverpool by port authorities over unpaid fees of some £570,000 (€647,000). The vessel was carrying food and medical supplies to Dublin, some of which was destined for Northern Ireland. It was reported in the Irish Times that “hauliers were fearful that the absence of P&O even for a short time would affect their capacity to travel through Liverpool.”

Although sailings on this route resumed after three days, it highlighted the largely hidden role maritime routes play for the all-island economy, but once disrupted they are brought into full and sharp view. While this has been highlighted by COVID-19, Brexit will likely be the next challenge that ports and shipping on this island will face in light of the recent news that checks will take place at Belfast, Larne and Warrenpoint ports on good travelling between Northern Ireland and Great Britain.