The Conference on the Future of Europe: How EU citizens will have their say 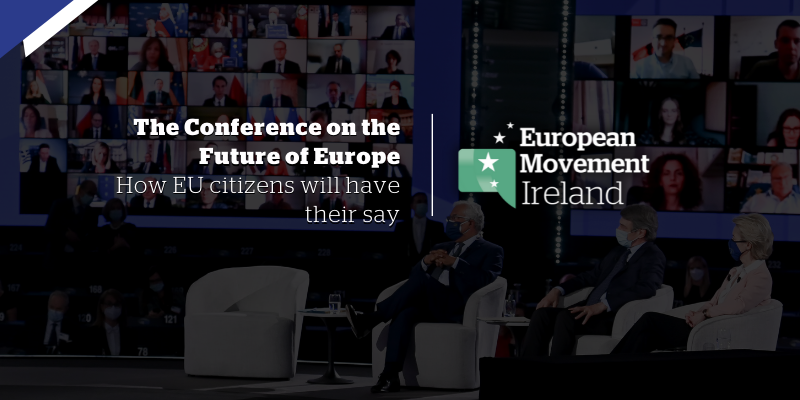 In European Movement Ireland’s Ireland and the EU Poll 2021, carried out in March 2021, 52% of respondents agreed that “now is the time to hold a Conference on the Future of Europe to reform the EU, even if it results in a referendum in Ireland”. With the Conference officially launched on 9 May 2021, we take a closer look at its key aims, and what we can expect it to achieve.

In recent years, a number of developments, including Brexit, have raised questions about the future of the European Union. As a result, a conversation was proposed regarding the challenges currently facing the EU and how it plans to address them in the coming years. This goal was significantly advanced in March 2019 when, ahead of the European Parliament elections, President Macron of France, published an open letter to all European citizens, proposing to set up a “Conference for Europe” to discuss “all the changes our political project needs”, by the year 2020.

The proposal began to take further shape when, in her Political Guidelines for the Next European Commission 2019-2024, the new Commission President, Ursula von der Leyen, outlined that such a Conference on the future of Europe would be organised by the European institutions as “equal partners” and that it would “start in 2020 and run for two years”.

Von der Leyen’s commitment to holding the Conference was further illustrated by her appointment of Dubravka Šuica as Vice-President of the Commission on Democracy and Demography, a new role specifically tasked to lead the process.

It was originally planned that the Conference would be launched on Europe Day, 9 May 2020, but due to the outbreak of the Covid-19 pandemic, the Conference had to be postponed, and ultimately was delayed by a year.

The Different Institutions’ Positions on the Conference

From the outset, it was agreed that the Conference was to be organised jointly by the three main EU Institutions, the European Commission, the European Parliament and the Council of the EU. However, there were differences in their approaches and aims for the Conference.

On 10 March 2021, the three Institutions united their positions in the Joint Declaration, which outlines the structure, scope and timing of the Conference.

The Executive Board is composed of three representatives, and up to four observers, of each of the three Institutions. Other EU bodies and social partners, such as the Committee of the Regions and the Economic and Social Committee, may also be invited as observers.

However, there is some criticism that civil society organisations have not been included as observers to the Executive Board. Certain groups, such as Civil Society Europe, have called for called for more representatives of civil society organisations to be given seats on the decision-making body of the Conference – to help bridge the gap between the EU’s Institutions and its citizens.

The Executive Board approved the set up of a Plenary of the Conference, which is an important step towards ensuring citizens’ input will be taken into account. It will be composed of 108 representatives from the European Parliament, 54 from the Council (two per Member State) and 3 from the European Commission, as well as 108 representatives from all national parliaments on an equal footing, and citizens. Additionally, 108 citizens will participate representing the European and national citizens’ panels. Further, representatives from the Committee of the Regions, the European Economic and Social Committee, social partners and civil society will be involved. The Conference Plenary will, after its exchanges around recommendations stemming from the citizens’ panels, submit its proposals to the Executive Board, who will then draft up a report to be published on the multilingual digital platform.

The Conference was officially launched in Strasbourg on 9 May 2021 and hopes to reach conclusions by spring 2022.

It is stated that the scope of the Conference should reflect the areas where the European Union already has the competence or power to act, or where European Union action would have been to the benefit of European citizens. Therefore, exploring the possibility of giving the EU new competences or powers, in areas such as health, is possible.

The Main Issues to be Addressed

Citizens are also free to raise any additional issues that matter to them.

Ultimately, the goal is to collect the ideas and feedback expressed by citizens during the Conference events and to compile a report with “concrete recommendations for EU Action”. The report’s proposals would be directly shaped by the citizens’ input and should be submitted to the three EU institutions by spring 2022.

The key challenges that face the Conference are:

It can be anticipated that one of the main challenges facing the Conference will simply be achieving sufficient levels of citizen participation and ensuring that citizens from a diverse range of backgrounds have their voices heard. The Conference aims to engage with citizens by holding events and debates across the Union, both in person and online, as well as through an interactive multilingual digital platform and feedback mechanism. Such Conference events, in person or online, will be organised at different levels, including local, regional, and national level dialogues. At the EU level, European-wide citizens’ panels will be organised. In all member states, there will be a challenge to ensure wide and meaningful participation in the Conference among ordinary citizens. Civil society organisations will play a crucial role in ensuring this is achieved.

The other main challenge facing the Conference will be in deciding how to translate the results of the citizens’ participation into tangible change – whether it be through the implementation of new direct legislation, or the initiation of institutional reform and proposals for treaty change. Catherine Day, former Secretary General of the European Commission, said, on an EM Ireland podcast in July 2020, that she believes that a certain level of renewal and change is to be welcomed as “each generation of EU citizens has to make the EU their own”.

What will Ireland be doing to take part in the Conference?

The Government of Ireland will be officially launching the Conference on the Future of Europe in Ireland on 14 May, at an event hosted by the Department of Foreign Affairs, in cooperation with European Movement Ireland.

This launch event will mark the beginning of a series of events, discussions and dialogues that will take place across Ireland over the coming year. European Movement Ireland will act as a key partner to the Department of Foreign Affairs in facilitating the Conference in Ireland. Our aim is to hold an inclusive conversation with voices from all corners of Irish society, by hosting meetings and discussions on a broad range of topics, and helping to enable other organisations, from diverse sectors, to hold their own dialogues, throughout the coming year.

To conclude, the Conference on the Future of Europe has the potential to re-shape both the policies and mechanisms of the Union. If successful, it will be the European Union’s largest-ever consultation process with its citizens and has the power to renew the European project. However, it will remain to be seen whether the Conference can overcome the challenges outlined above.