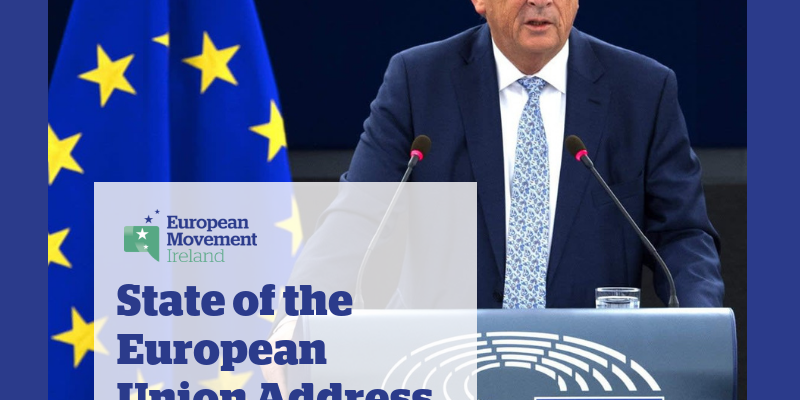 State of the European Union Address

President Juncker opened his speech by reflecting on the need to look forward, and stated that there is “still much to be done” by the European Commission in the final year of its mandate. He also commented that the EU had helped to make possible “a peaceful continent” and that it was the “perpetual responsibility” of the EU to preserve this peace.

President Juncker outlined six key proposals for the upcoming year in the areas of:

President Juncker then reflected on the economic progress which the EU has made in the last decade since the financial crisis. Among other things, he also addressed the EU’s ‘global responsibility’ in the area of climate change and stated that there was a need to strengthen European unity in the face of external challenges, commenting that “Europe can export stability”.

The Hour of European Sovereignty

President Juncker stated in the address his belief that the current “geopolitical situation makes this Europe’s hour”, adding that “the time for European sovereignty has come”. He emphasised the importance, in his view, of “a strong and united Europe” in order to strengthen its role on the global stage and champion multilateralism.

President Juncker stated that he would continue to work towards the goal of achieving a fully operational European Defence Fund and a Permanent Structured Cooperation in Defence. He commented that “we will not militarise the European Union. What we want is to become more autonomous and live up to our global responsibilities”.

President Juncker also called on Europe to develop “Weltpolitikfähigkeit”, a policy of the EU taking a more active role in the shaping of world affairs.

The speech in Strasbourg was accompanied by the European Commission’s adoption of 18 initiatives, and President Juncker stressed the importance of delivering results ahead of theEuropean Parliament elections in May 2019. With regards to migration policy, he proposed to increase the European Border and Coast Guard Agency (FRONTEX) by 10,000 guards by 2020, in order to support the European Asylum Agency, and quicken the return of illegal migrants.

President Juncker also announced his proposal for a new ‘Alliance for Sustainable Investment and Jobs between Europe and Africa’, stating that the EU needs to develop an equal partnership with the continent, one that is not seen “through the sole prism of development aid”.

President Juncker then turned his attention to Brexit, addressing the unique circumstances on the island of Ireland by stating that “the European Commission, the [European] Parliament and all other 26 Member States will always show loyalty and solidarity with Ireland when it comes to the Irish border”.

A Strong Perspective for the Future

Looking ahead to the future, President Juncker outlined objectives to be achieved before EU leaders meet in Sibiu, Romania on 9 May 2019. Romania will hold the Presidency of the Council of the EU from January to June 2019 and EU leaders will meet for a ‘Special Summit’ in order “to take the decisions needed for a more united, stronger and democratic Europe” as announced by President Juncker in his 2017 State of the European Union address.

Objectives ahead of the Summit in Sibiu include ratifying the EU-Japan partnership agreement and reaching an agreement in principle on the Multiannual Financial Framework (MFF), the EU’s long-term budget. The European Commission published its proposals for the MFF for the period of 2021-2027 in May 2018 and the proposal is currently undergoing inter-institutional negotiations.

President Juncker also emphasised the importance of deepening the Economic and Monetary Union to strengthen the single currency and allow it “to play its full role on the international scene”.

President Juncker concluded his address by looking ahead to the 2019 European elections. He endorsed the Spitzenkandidaten process for electing the European Commission President as a “small step forward for European democracy” but added that he believed the process would be more credible if transnational lists were used in European Parliament elections.

President Juncker called on the EU to take its place on the world stage as an “architect of tomorrow’s world”.