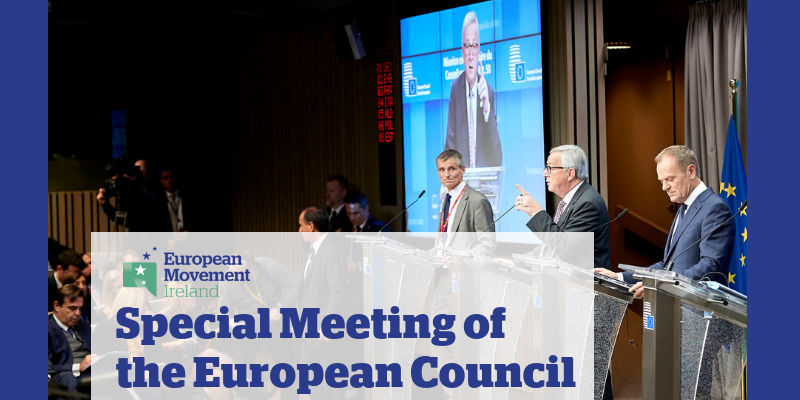 On Sunday, 25 November, EU27 leaders met in Brussels for a special meeting of the European Council to endorse the draft withdrawal agreement reached between EU and UK negotiators on 14 November. EU27 leaders also approved the political declaration setting out the framework for the future relationship between the EU and the UK.

In his invitation letter to EU27 leaders, President Tusk stated that the draft withdrawal agreement “ensures that the rights of our citizens are fully protected, the peace process in Northern Ireland should not be affected, the UK will continue its payments to the EU budget during the transition period and legal certainty will be secured”, thereby meeting the objectives set out in the EU27’s negotiating directives.

On Thursday, 22 November, the draft political declaration setting out the framework for the future relationship between the EU and the UK was published by both sides.

The political declaration covers a wide range of areas, including customs, security, financial services and trade in goods. Regarding the future economic partnership, the political declaration states that the EU and UK “envisage having a trading relationship on goods that is as close as possible”, and that they intend to “create a free trade area, combining deep regulatory and customs cooperation, underpinned by provisions ensuring a level playing field for open and fair competition”.

On Sunday, EU27 leaders approved the draft political declaration and restated the EU’s “determination to have as close as possible a partnership with the United Kingdom in the future.”

The political declaration is non-binding; the full scope of the future relationship will have to be negotiated by the two sides once the UK has left the EU.

In his remarks following Sunday’s meeting, President Tusk said EU leaders had invited “the Commission, the European Parliament and the Council to take the necessary steps to ensure that the agreement can enter into force on 30th March 2019, so as to provide for an orderly withdrawal”.

The European Parliament will hold a vote on the withdrawal agreement, with a simple majority needed to pass it. The last European Parliament plenary during which Members of the European Parliament (MEPs) can do so is during its sitting from 11-14 March 2019. To ratify the deal, the Council of the EU will then need to conclude and approve the withdrawal agreement through a strong qualified majority vote. This means that at least 72 per cent of EU countries would have to agree to the divorce terms, which would amount to 20 of the 27 EU countries after the UK leaves. These countries would need to make up at least 65 per cent of the population of the EU, or account for around 290 million people of the EU’s population without the UK.

UK Members of Parliament (MPs) will also have to vote by a simple majority in order to ratify the withdrawal agreement. If the deal is passed in Westminster, UK Prime Minister, Theresa May would also have to pass domestic legislation converting the withdrawal agreement into UK law before 29 March 2019. The UK Parliament vote is expected to take place in early December.

Following Sunday’s meeting, Taoiseach Leo Varadkar TD stated that although it is regrettable that the UK is leaving the EU, he believes that the withdrawal agreement on the table is “the best deal that is available both for the United Kingdom and for the European Union”.