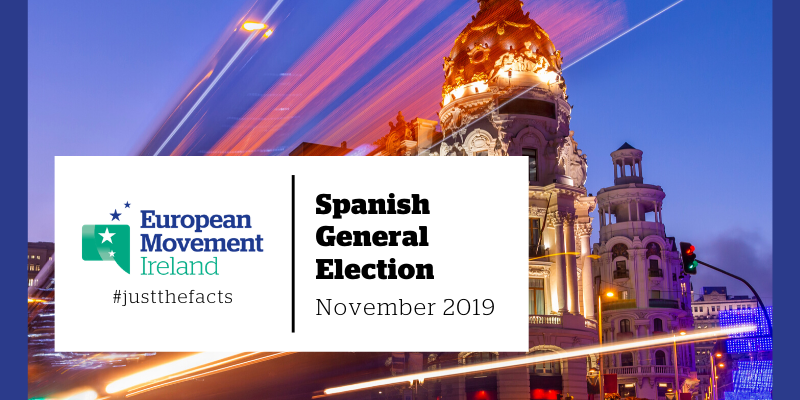 On Sunday 10 November, Spain held its fourth general election in four years, after its political parties failed to reach a governing deal in the wake of April’s inconclusive polls. Spaniards elected the 14th Cortes Generales (both houses of parliament) with all 350 seats in the Congress of Deputies up for election, as well as 208 of 265 seats in the Senate.

Spain is a parliamentary monarchy, with King Felipe VI serving as head of state, and Pedro Sánchez of the Spanish Socialist Worker’s Party (PSOE) is the current Prime Minister, who carries out the role of head of government. Spain’s houses of parliament, the Cortes Generales, is made up of two chambers. The Upper House, known as el Senado (the Senate), which is comprised of 208 elected officials and 57 officials appointed by regional legislators. And the Lower House, known as el Congreso de los Diputados (the Congress of Deputies) is made up of 350 members elected by the public. The Congress of Deputies holds more legislative power than the Senate.

Having been in power for just eight months from June 2018, in February 2019 Sánchez was forced to call a snap election that was held on April 28. Since June 2018, Sánchez had ruled with a minority government holding only 84 seats. PSOE governed with a type of confidence and supply agreement with Unidas Podemos (roughly “We Can”), a left-wing party, and smaller Basque and Catalan nationalist parties. But the two main Catalan parties rejected PSOE’s national budget proposal, as did the opposition centre-right Partido Popular (People’s Party) and liberal Ciudadanos (Citizens party).

However, in the April 2019 election Sánchez fell well short of winning a majority 176 seats in the country’s 350-seat Congress. PSOE, which won 123 seats in April, is – like Labour – a member of the Progressive Alliance of Socialists and Democrats for Europe at the European Parliament. The far left Unidas Podemos won 42 seats in April, and is a member of the United Left grouping at the European Parliament along with Sinn Féin. The Partido Popular (PP) sits with the same political grouping as Fine Gael, the European People’s Party, while Ciudadanos sits alongside Fianna Fáil in the centrist-liberal Renew Europe grouping.

Following the April election, Sánchez was unable to form a coalition government with any of the other political parties. This perpetual political deadlock triggered Sánchez’ decision to call another general election, which was held on November 10.

Like Ireland in some respects, a civil war framed Spanish politics for much of the 20th century. However, following a common European trend, Spain’s political landscape has changed and fragmented in recent years, with the emergence of three new parties: the liberal Ciudadanos, the far-left Unidas Podemos, and the far-right Vox. These three parties have disrupted Spain’s traditional two-party system, challenging the longstanding primacy of PSOE and the PP.

Furthermore, Spain has experienced a tough decade economically, following a broadly similar economic downturn and recovery path to that of Ireland. Like Ireland, for example, Spain introduced tough austerity measures over the last decade, but is now experiencing a welcome relative upturn in economic growth as well as a reduction of unemployment.

Many political commentators considered Sánchez’ decision to hold another election this year, on November 10, to be fraught with risks. Not only might PSOE not win a majority, but also – in large part due to the ongoing crisis in Catalonia – right-wing political opponents, Vox and the PP, were likely to gain seats (Vox already won some 24 seats in April, its first ever at national level).

Sanchez, in turn, accused Ciudadanos, the PP, and Unidas Podemos of “choosing to block the formation of a government that the Spanish people demanded at the ballot box”, but hoped voters would rally to what he called the PSOE’s “progressive path”.

On a lower turnout than in April, from just over 75 per cent to just under 70 per cent, PM Sanchez lost his November gamble. PSOE remains the largest party, but not only did they lose three seats, both the PP and Vox also made considerable gains. The PP won 22 more seats than in April, while the far-right Vox more than doubled its total, winning 52 seats.

The other big loser was the centrist Ciudidanos, which lost a whopping 47 seats, resulting in the resignation of its leader Albert Rivera, while the far-left Unidas Podemos lost seven seats.

As in April, neither broadly left-wing nor right-wing coalitions can command a parliamentary majority, resulting in Spain facing more political uncertainty. El País reported that Sánchez has asked the other political parties for “generosity” to break the stalemate: “Our goal is to form a stable government. We have won the elections. This time, no matter what, we are going to achieve a progressive government”. However, while Sánchez said he was reaching out to all political parties, he made a point of excluding “those that sow the rhetoric of hate,” in a thinly veiled reference toVox.

The leader of the second largest parliamentary party, Pablo Casado of the PP, has called on Sánchez to resign as PM, and Santiago Abascal, leader of far-right Vox, hailed his party’s dramatic rise from no representation to third largest parliamentary party in less than a year. Support for the far-right group appears to have soared in response to protests in Barcelona that erupted in October, after the Spanish Supreme Court sentenced nine Catalan separatists to prison.

King Felipe VI will soon hold talks with political party leaders, so that one of them, most likely current PM Sánchez, would try to form a government. Barring an unprecedented German-style “grand coalition” of the main centre-left and centre-right parties, PSOE and the PP, any other governing coalition will be multi-party, will take time to form, and may not prove stable.