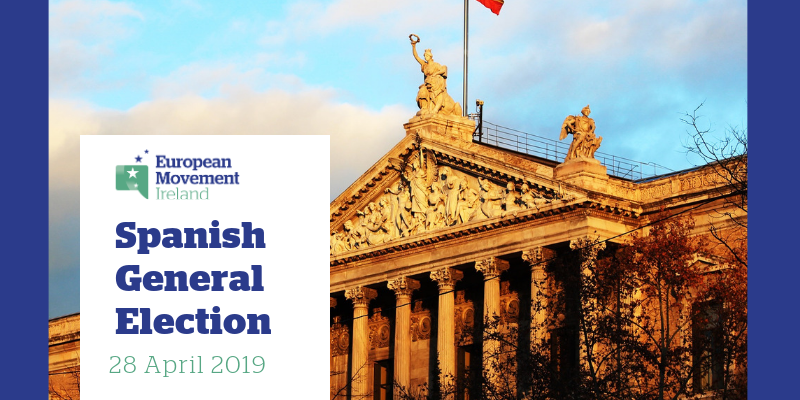 On Sunday, 28 April, Spain held its third general election in just over three years. Pedro Sánchez, Prime Minister and leader of the socialist PSOE (Spanish Social Workers Party), called a snap election after his budget was rejected in February.

Spain is a parliamentary monarchy, with King Felipe VI serving as the official head of state, and Sánchez is prime minister, who carries out the role of head of government. Spain’s national parliament, the Cortes Generales, is made up of two chambers. The Upper House, known as the Senate (Senado), which is comprised of 208 elected officials and 57 officials appointed by regional legislators. And the Lower House, known as the Congress of Deputies (Congreso de los Diputados) is made up of 350 members elected by the public. The Congress of Deputies holds more legislative power than the Senate.

On February 15, after having been in power for just 8 months, Pedro Sánchez was forced to call a snap election when Catalan successionists joined right-wing parties in rejecting his national budget. The PSOE entered office in June 2018 after Mariano Rajoy’s Partido Popular (Peoples Party) government, engulfed with corruption scandals, lost a motion of no-confidence.

Sánchez ensued to rule with a minority government holding just 84 seats. PSOE governed with a type of confidence and supply agreement with Podemos (“We Can”), a left-wing party, and small Basque nationalist parties and Catalan nationalist parties such as the ERC. This, however, proved to be a short-lived arrangement.

Following a common European trend, the political landscape in Spain has become increasingly fragmented in recent years. The emergence of Vox, a far-right party, which broke through in the regional elections in Andalusia last year, has further demonstrated the fragmentation of the Spanish political landscape, since its rise has split the right-wing electorate. Vox won 24 seats.

Voter turn-out stood at 75.8 per cent, up from 66.5 per cent in the last general election in 2016.  As predicted PSOE won 28.7 per cent of the vote, securing 123 seats, an impressive increase from the 85 seats it won in 2016. PSOE, like Labour, is a member of the Progressive Alliance of Socialists and Democrats for Europe (S&D) at the European Parliament. It has also regained control of the Senate for the first time in 25 years.

PSOE, however, has fallen short of winning a majority, set at 176 seats. Sánchez will now need to seek support from other parties to form a government and maintain his position as Prime Minister. The left-wing alliance between Podemos and United Left, Unidas Podemos, won 42 seats. Unidas Podemos is a member of the European United Left grouping along with Sinn Féin in the European Parliament. 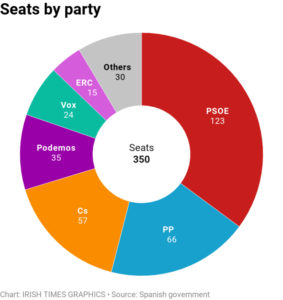 57 seats. Partido Popular (PP) sits with the same political grouping as Fine Gael in the European Parliament, the European People’s Party (EPP), while Ciudadanos sits alongside Fianna Fáil with the Alliance of Liberals and Democrats for Europe (ALDE).

Pablo Casado’s (leader of PP) attempt at leading the party further to the right in an effort to take some of Vox’s votes backfired. PP lost almost half of its seats in what turned out to be their worst ever election result.  It is expected that pressure will now mount on Casado to step down as party leader. Together with Vox, these three parties on the broad right account for 147 seats.

Together, PSOE and Unidas Podemos, do not hold enough seats to form a parliamentary majority. In total they won 165 seats, 11 seats short of a majority. Podemos leader, Pablo Iglesias, has expressed interest in joining forces. Sánchez, however, would still need to look elsewhere to form a majority. One option would be for PSOE, Podemos Unidas and pro-independence parties, from Catalonia for example, to form a coalition government.

However, forming a new government that relied on separatist parties such as the Catalan ERC, which won 15 seats, could result in the government having relatively unstable governing arrangements (as witnessed over the last year or so). Separatists had a big hand in forcing Sánchez to call a snap election in February.

An alternative could be for PSOE to work with the centre-right Ciudadanos.  If both were to join forces, they would account for 179 seats.  Ciudadanos party leader, Albert Rivera, however, ruled out that possibility ahead of the elections. Both parties have very different approaches to the Catalan crisis. Alternatively, PSOE could attempt to govern alone, maintaining a model similar to their current confidence and supply agreement with other smaller parties.

Spain will return to the polls on 26 May to vote in the European Parliament elections, regional elections and local elections, therefore, it is unlikely that any parties will agree to any formal coalition talks beforehand.