Somewhere over the Rainbow: LGBTI+ Rights in the EU 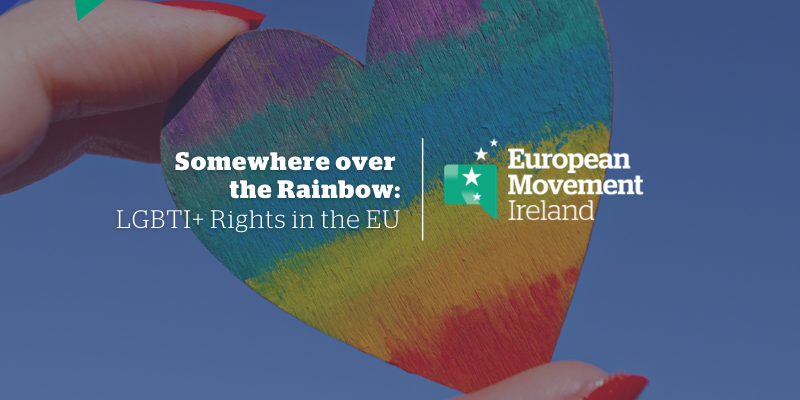 With anti-LGBTI+ laws and rhetoric coming to the fore in some EU Member States, it is clear that LGBTI+ rights remain deeply divergent across the EU. In this Just the Facts, we examine the chequered legal landscape for LGBTI+ people across the EU.

Article 21 of the EU Charter of Fundamental Rights explicitly bans discrimination based on sexual orientation. In addition to this, the EU can introduce legislation to combat this type of discrimination under Article 19 of the Treaty on the Functioning of the European Union.

For example, since the year 2000, discrimination based on sexual orientation in the workplace is prohibited under Directive 2000/78/EC, in relation to applying for a job, workplace bullying, being denied a promotion or receiving training, to name a few.

However, the scope for EU legislative action here is limited, due to the extent of the EU’s legal competences, in particular in social areas, that are the responsibility of Member States. However, it is these areas that LGBTI+ people face particular vulnerability, such as in social protection, healthcare, education, access to goods and services, family law and marital status.

ILGA (the International Lesbian, Gay, Bisexual, Trans and Intersex Association) is an NGO that has campaigned for equality for LGBTI+ people around the world since 1978. ILGA-Europe was established in 1996 and monitors 54 European and Central Asian countries.

Each year, since 2009, it has published the ‘Rainbow Europe’ index that grades each country from 0 – 100 based on the advances and retreats for LGBTI+ rights in Europe. This is evaluated under six thematic categories: equality and non-discrimination; family; hate crime and hate speech; legal gender recognition and bodily integrity; civil society space; and asylum.

The 2020 version is available on the ILGA website here.

The rankings of the 27 EU countries according to ILGA-Europe’s Rainbow Index for 2019 are presented in the table below. At 86, Malta is ranked highest, with Poland at the lowest point on the scale at 16, while Ireland, at 52, is above the EU average of 46.

A table has been compiled and included at the end of this Just the Facts reflecting how each of the EU members’ rankings have changed from 2012 to 2019.

The EU helping to fund change:

While ILGA-Europe provides important work in documenting LGBTI+ rights across Europe, it does not measure how LGBTI+ people are treated. In 2019, a special Eurobarometer survey entitled “The social acceptance of LGBTI people in the EU” was published to explore this further.

One of the questions asked was, “how comfortable would you feel with the following people showing affection in public (e.g. kissing or holding hands)?”. Stark differences appear based on sexual orientation, as presented in the table below, which focuses on Malta and Poland, the highest and lowest ranked EU countries in ILGA-Europe’s Rainbow Index, in addition to Ireland.

In this survey, Malta is ranked 12th and 15th out of the EU27 in terms of acceptance of public affection between two men and two women, respectively, with Poland ranked 17th in the case of both. This Eurobarometer highlights how LGBTI+ laws do not result in social equality.

With the EU legislative route complicated due to what it can legislate on, the EU has adopted a series of strategies and funding programmes to promote non-discrimination and equal opportunities.

Since 2018, over €6 million has been awarded under the Commission’s Rights, Equality and Citizenship Programme to fund projects across the EU and beyond.

One such funding initiative was when Age Action Ireland was one of six partners from Italy, Romania, Portugal, Greece and the Netherlands on the ‘The Best4OlderLGBTI’ project. It aimed “to fight against discrimination based on age, sexual orientation, gender identity, gender expression and sex characteristics of older people, and to promote the rights of older (LGBTI) people, through raising awareness of different target groups contributing for a more equal and inclusive society.”

The EU also provides funding through Erasmus+ Programme to help people facing difficulties in accessing education, in relation to their gender and sexual orientation.

To help coordinate all of this, the European Commission now publishes an annual report on the “List of actions to advance LGBTI+ equality”. The 2018 Annual Report (published in March 2019) can be found here.

Standing up for LGBTI+ rights:

Increasingly LGBTI+ issues are part of the EU’s political agenda. In December 2018, a total of 19 Member States had urged the Commission to follow-up on their current list of actions and adopt a coherent EU LGBTI+ strategy.

In July this year, European Commissioner for Equality Helena Dalli, blocked funding applications for six town twinning applications that involved Polish partners, due to their stance on LGBTI+ issues. In 2019, some 80 municipalities in Poland declared themselves “free of LGBT ideology”, which have been supported by local politicians associated with the ruling Conservative Law and Justice party.

Commissioner Dalli made the decisions as she said “EU values and fundamental rights must be respected by Member States and state authorities. This is why six town twinning applications involving Polish authorities that adopted ‘LGBTI free zones’ or ‘family rights’ resolutions were rejected.”

This presented a strong signal that the EU is willing to stand up for LGBTI+ rights and will continue to do so, which is important at a time when such rights remain fragile across many parts of the EU and Europe.