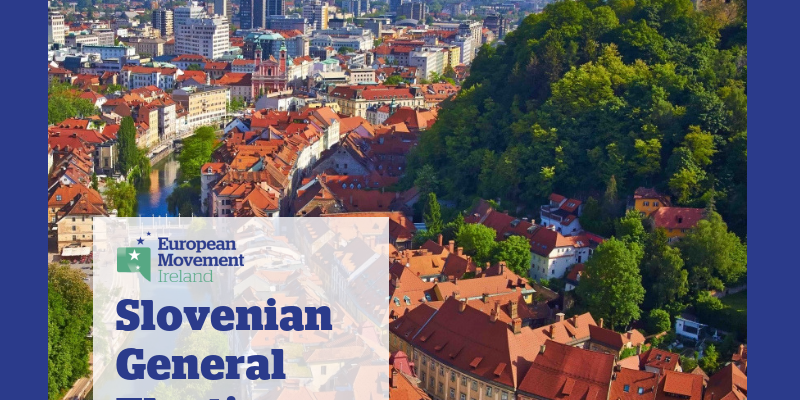 The Slovenian electorate went to the polls on Sunday to elect a new Parliament. 25 political parties contested the election, with nine expected to have secured enough votes to be elected. Provisional results show the conservative Slovenian Democratic Party emerging as the largest party with 24.9 per cent of the vote. As none of the parties are forecasted to have achieved an outright majority in Parliament, negotiations to form a coalition government are expected to follow in the coming weeks.

In September 2017, a referendum was held on a railway project proposed to run from the port town of Koper to the town of Divača. A civil society group known as ‘Taxpayers Don’t Give Up’ had requested the referendum on the grounds that they thought the project, at an estimated cost of one billion euro, was too expensive. The Slovenian government’s proposal to build the railway passed with 53.5 per cent of the vote, with turnout at 20.6 per cent. In March 2018, Slovenia’s Supreme Court annulled the results of the referendum and called for a new vote because of the low turnout. The ruling led Slovenian Prime Minister, Miro Cerar, to resign from his post and the general election to be moved forward by a week to 3 June.

Slovenia uses a proportional representation system to elect members to the Parliament, which is known as the National Assembly. There are 90 seats in the National Assembly, and political parties must reach a minimum threshold of four per cent of the vote in order to take their seats. Two seats are reserved for the communities of Italian and Hungarian ethnic minorities, which are elected through a first-past-the-post system.

Pre-election polls showed the conservative Slovenian Democratic Party (SDS) with a significant lead, although unlikely to secure an outright parliamentary majority. The SDS campaigned on an anti-immigration platform, having opposed quotas under the EU temporary relocation scheme as proposed by the European Commission in response to the refugee crisis and formally adopted by Member States in the Justice and Home Affairs Council in 2015. The SDS is known to have close ties with Hungarian Prime Minister Viktor Orbán, who made a speech at the SDS Congress in May 2017. SDS leader, Janez Janša, has twice served as Prime Minister, from 2004-2008 and 2012-2013. In 2013, he was sentenced to two years in prison for a bribery conviction relating to an arms deal in 2006, of which he served six months before the Constitutional Court ordered a retrial that never took place because a ten-year time limit on the case expired first.

Pre-election polls showed the centre-left List of Marjan Šarec (LMŠ) in second place, in its first time contesting a general election. The party’s leader, Marjan Šarec, a former political satirist, contested the 2017 Slovenian Presidential election, finishing in second place. During the general election campaign, Mr Šarec stated his party would be unwilling to join a coalition with the SDS, as did many of the other left-leaning parties.

Despite hopes of securing a stronger mandate, the vote share of the ruling Modern Centre Party (SMC) was forecast to drop to eight per cent. Their junior coalition partners, the Slovenian Social Democrats (SD) and the Democratic Party of Pensioners of Slovenia (DeSUS), were expected to win similar vote shares.

The Left won 9.3 per cent of the vote share, New Slovenia won 7.1 per cent, the Party of Alenka Bratušek won 5.1 per cent, and the Slovenian National Party won 4.2 per cent. Turnout was estimated to be 52 per cent, at a similar level to the previous parliamentary elections in 2014.

Reacting to the preliminary results, SDS leader, Mr Janša, commented that “Those who cast their ballots for us have elected a party that will put Slovenia first”. He also stated his willingness to have negotiations with all political parties, declaring “We are open for cooperation, Slovenia is facing times which need cooperation”.

President Borut Pahor is expected to offer Mr Janša a mandate to form a government, stating after the election: “I am not obliged to award the mandate to the relative winner of the election, but I will do so because I strongly believe in democracy.” Negotiations to form a coalition government are likely to take some time.

On Friday, 25 May 2018, a new EU Regulation, the General Data Protection Regulation (GDPR), relating to the protection of citizens’ right to privacy, and the modernisation of data protection laws in the EU, came into effect. The GDPR aims to give individuals greater control over how their personal data are processed and used.

The General Data Protection Regulation (GDPR) aims to give European Union (EU) citizens greater control over their personal data. Individuals’ fundamental rights to privacy and to the protection of their personal data are enshrined in the EU Charter of Fundamental Rights. The GDPR defines personal data as “any information relating to an identified or identifiable natural person”. This includes any information that could be collectively used to identify an individual such as names, email addresses, photos, and bank details.

Prior to the introduction of the GDPR, the Data Protection Directive (Directive 95/46/EC) adopted in 1995 protected individuals by regulating both the processing and the free movement of personal data within the EU. The GDPR, alongside a directive on data transfers for policing and judicial purposes, replaces the 1995 Directive which was adopted at a time when the internet was still a new phenomenon, and modernises its principles with the aim of providing regulation fit for purpose in the digital era. As well as this, the GDPR aims to increase efficiency in the EU’s Digital Single Market by harmonising the EU’s regulatory environment with regard to personal data.

In January 2012, the European Commission issued a proposal for wide-ranging reform of the EU’s 1995 data protection rules due to the need to “build a stronger and more coherent data protection framework in the EU” to accompany developments in technology and increased online activity.

Three-way institutional negotiations on the GDPR between the European Commission, the Council of the EU, and the European Parliament began in June 2015. These talks continued for six months, until an informal agreement was reached in December 2015.

After further work on the proposed legislation, the GDPR was adopted by the Council of the EU on 8 April 2016 and the European Parliament voted to approve the GDPR on 14 April 2016. The GDPR subsequently entered into force on 24 May 2016 and Member States then had exactly two years to transpose it into national law before the GDPR became directly applicable in all EU countries on 25 May 2018.

The Principles of the GDPR

The GDPR introduces a number of rules to reinforce the rights of the individual by giving citizens greater control over the use of their personal data. The GDPR also aims to strengthen trust in the EU’s Digital Single Market. Any company that operates within the EU, whether they are established inside or outside of the EU, must be GDPR compliant by 25 May 2018. This means that large multinational companies such as Facebook and Google must abide by the new Regulation when operating within the EU. The GDPR also acts to protect the exportation of individuals’ personal data outside of the EU.

The new legislation aims to establish a ‘one-stop-shop’ for data rules and regulation to increase efficiency and improve regulatory oversight within the EU’s Digital Single Market. In contrast to the multitude of national laws surrounding data protection which has existed throughout the EU previously, the Regulation establishes the European Data Protection Board (EDPB) which is tasked with ensuring the consistency of the application of the GDPR throughout the EU.

Under the new Regulation, organisations in breach of the GDPR may face fines of up to four per cent of their total global turnover, or €20 million, whichever amount is greater. The GDPR also stipulates that any company that handles sensitive personal data on a “large scale” must appoint a Data Protection Officer.

On 24 May, European Commission Vice-President for the Digital Single Market, Mr Andrus Ansip, stated: “The new rules ensure that citizens can trust in how their data is used and that the EU can make the best of the opportunities of the data economy.”