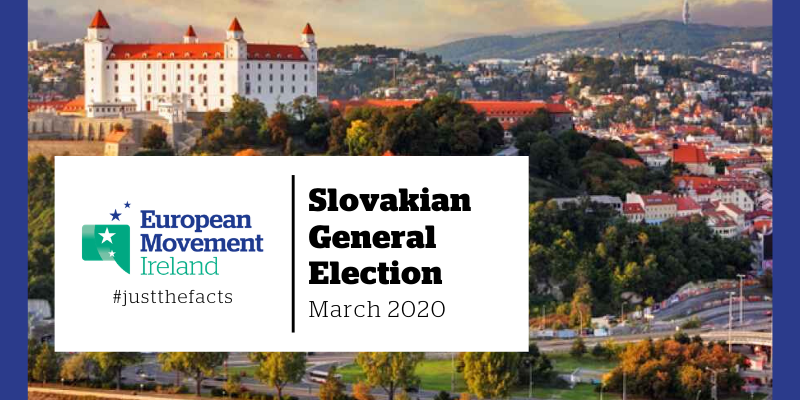 On Saturday the 29 February Slovakia went to the polls for what is only their eighth general election since their establishment as an independent country from the Czech Republic in 1993.

Slovakia is a unicameral parliamentary, representative democratic republic with a prime minister who is the head of government and a head of state who is the president.

In a general election, Slovakians elect 150 MPs to their parliament, the National Council. This is done by way of proportional representation across a single nationwide electoral constituency via a list system. Voters can give up to four preferences with seats distributed by the Hagenback-Bischoff quota system, a variant of the D’Hondt system. As a result, with many parties contesting Slovakian elections, it is usually necessary for them to form coalition, with 76 MPs required to form a working majority.  Parties in Slovakia are also required to receive at least 5% of all votes cast in order to have parliamentary representation or 7% if parties run candidates as part of pre-election alliances.

Story of the last election: growth of the far-right

In 2016 some 26 parties stood in the election, with eight parties meeting the 5% threshold required to enter the National Council. The ruling centre-left populist party Direction–Social Democracy (S&D affiliation at the European Parliament) remained the largest party with 49 seats, despite losing 34 seats in the election. Direction–Social Democracy (Smer-SD), led by Robert Fico, went into coalition with three other parties to form a working majority. The first of these were the right-wing Eurosceptic Slovak National Party (SNS, no EP affiliation), with 15 seats. The second was Most–Híd (EPP), which represents the country’s Hungarian minority. The final party in the coalition, was the newly formed Slovak Conservative Party (SKS, no EP affiliation) with 10 seats.

What was notable in the 2016 general election was the prevalence of right-wing and far-right parties in the National Council; one such party was Freedom and Solidarity (SAS, ECR in the EP), which increased its seats from ten to 21; the far-right Kotlebists – People’s Party Our Slovakia (L’SNS, APF in the EP) entered the National Council for the first time with 14 seats; while We Are Family (SR, I&DP in the EP), secured 11 seats.

Support for Smer-SD  has waned since 2016 in part due to the murder of journalist Ján Kuciak and his fiancée Martina Kušnírová in February 2018 at their home in Bratislava. According to the BBC, Kuciak had been investigating corrupt Slovak businessmen, EU subsidy and VAT fraud and Italy’s notorious Ndrangheta mafia gang and its attempts to cultivate ties with Slovak politicians. This incident prompted public outrage with mass protests taking place across the country, resulting in the resignation of the prime minister and leader of Smer-SD Robert Fico in March 2018 who was replaced as Prime Minister by Peter Pellegrini. Although, Fico took this action in order to avoid early elections and to “solve the political crisis” that had gripped the country, this political crisis  significantly weakened the coalition government.

Other parties such as L’SNS  have also been at the centre of controversy in Slovakia. The party leader, Marian Kolteba, is due to face criminal charges regarding alleged use of neoNazi ideology and the party itself survived legal accusations that its existence was ‘unconstitutional’ on the basis that they were promoting fascist tendencies.

Results and Reactions: An unexpected result

On 29 February 2020, 65.8% of voters turned out, the highest in almost two decades, and centre-right Ordinary People (OL’aNO, EPP in the EP) produced a shock result, receiving the highest percentage of the overall vote at 25%, securing 53 seats. Ordinary People’s win was further boosted by the overall success of the five parties (including Ordinary People) that bill themselves as the ‘democratic opposition’ to the incumbent Smer-SD party, who collectively won almost 50% of the vote and 78 seats. Although this victory leaves Ordinary People as part of the ‘democratic opposition’ with a working majority, it is slightly short of the 90 seats required to make constitutional changes, a measure which Ordinary People believe is necessary to fight against corruption. Therefore, party leader Igor Matovič may have to enter coalition with other parties that don’t necessarily align with their political ideology.

Ordinary People have already ruled out talks (only) with Smer-SD, who as expected suffered a large defeat at the polls, retaining only 18.3% of overall votes and 38 seats.

Elsewhere there were disappointments for both Slovakia’s far-right populists and centrist-liberals. While, the far-right L’SNS party had been receiving substantial media attention and had also been polling strongly at 11%, they failed to capitalise on their support and only won 17 seats, an additional just three seats from 2016. Following the election of the centrist-liberal Zuzana Čaputová of Progressive Slovakia in last year’s presidential election there had been speculation that this could give rise to a new liberal style of politics in Central Europe. However, in this election Progressive Slovakia (PS/S, Renew at the EP) who had partnered with the smaller like-minded party of Together-Civic Democracy (Spolu) failed by the smallest of margins to reach the 7% threshold required to enter parliament as part of a coalition grouping, with largely centre-right and right-wing parties benefiting this time around.

Despite Slovakia previously showing some similar patterns of rising right-win populism to other Central and Eastern European countries, it appears that the primary concern of the electorate in this election was the desire for change from the ruling D-SD that was at the centre of corruption allegations.