“Singapore-upon-Thames”: A buccaneering Britain after Brexit? 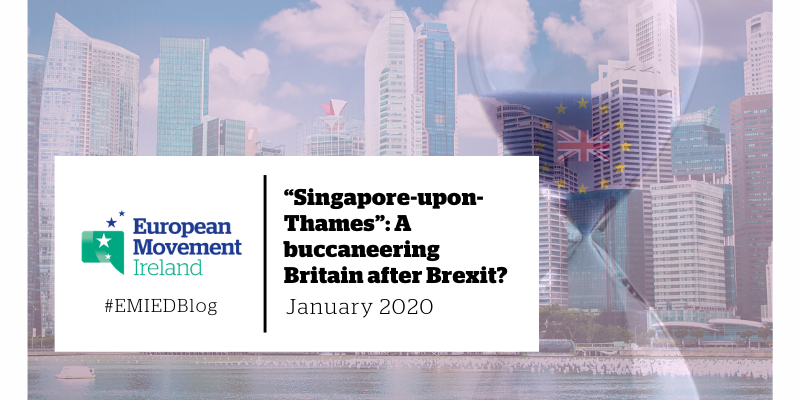 While the economic conditions that Britain will pursue outside the EU remain uncertain and can only be guessed by peering behind the political curtain, it is the EU’s wish to have as close as possible a relationship with the UK.

However, one issue that has flown under the radar since the conclusion of the revised Withdrawal Agreement, has been the complete removal of the ‘level playing field’ provisions from the agreement.

The ‘level playing field’ (or LPF) was sought by the EU to limit the UK’s ability to gain what it saw as an unfair competitive advantage, if the UK decided to lower standards on environmental protection, consumer policy, labour safeguards, state aid or taxation.

Instead, the LPF provisions have been replaced by less specific and non-binding commitments in the Political Declaration.

A scenario of a highly deregulated UK has been dubbed as a ‘Singapore-upon-Thames’. Dr Charles Woolfson, of Linköping University, has described this as “an ultra-business-friendly environment with low or zero corporation tax, low wages, weak trade unions, [and] vestigial welfare provisions”.

Conservative MP Owen Paterson, former Secretary of State for Northern Ireland, who was a leading voice in the Leave.EU campaign in 2016, believes that a ‘Singapore-upon-Thames’ would be a “low-tax, low-spend, low regulation” Britain.

With the UK’s close geographical proximity to the EU, such a scenario does raise concerns, in particular for Ireland, due to our shared border with the UK.

However, through three different routes, let us unpack what a ‘Singapore-upon-Thames’ actually is. Is it fact or fiction?

Since gaining independence from Malaysia in 1965, Singapore, a small city-state, has focused on a policy of free trade, allowing it to become of the richest countries in the world. While promoting new industries, it also participates actively in regional organisations and was a founding member of ASEAN.

In terms of welfare distribution, the Central Provident Fund has existed as Singapore’s compulsory savings plan. It funds retirement, healthcare, and housing requirements, where employers must contribute 17% until they reach the age of 55, while for employees, the rate is 20%, with different declining rates after this.

The Singapore economy does not rely exclusively on banking. Finance and insurance account for 13% of GDP (7% in the UK), with manufacturing at 22% (compared to 10% in the UK). While it has no capital gains tax, its corporation tax is at 17%, only slightly behind the 19% applied in the UK.

However, the People’s Action Party has been the only party to form a government in Singapore since 1959. Timothy Besley and Masayuki Kudamatsu, of the London School of Economics, have stated that an autocratic style of government is applied here. In terms of the Democracy Index, the country is ranked 66th out of 167 countries, and 151st out of 180 in the Press Freedom Index.

Accessing the EU’s single market was a key factor for Singapore completing trade talks with the EU and came into effect in November. The EU is the country’s third largest trading partner in goods and the largest in services.

It is also the case that with the ASEAN market consisting of 600 million consumers and expected to become the fourth largest economic bloc by 2030. This deal is anticipated to be a critical signpost to indicate how an eventual EU-ASEAN trade agreement might be reached.

One aspect of the trade deal is that over 80% of all imports from Singapore will enter the EU duty-free – these include products from pharmaceuticals to footwear. However, the agreement protects certain sensitive sectors (like TV, radio and film, public health and education, social services and water distribution) in which no commitments were made.

The short answer is no. What some Brexiters present Singapore to be is more of a mirage rather than a creditable course of economic policy planning. As outlined, Singapore is far from the laissez faire free-for-all that some Brexiters wish for it to be.

It is unlikely that the UK, as a parliamentary democracy, with a European-style social model could chart the same route that Singapore has. It is also the case that the Conservative party, once a champion for a smaller state, won the recent general election on a platform of ‘Getting Brexit Done’ in order to focus on delivering increased public spending and public services.

Additionally, the new European Commissioner for Trade Phil Hogan, has said that a Singapore-upon-Thames “is a nice soundbite but I don’t think there’s any reality to it. I think the United Kingdom will find out, rather negatively, in the future in relation to independent trade deals that they will find it difficult to get better deals than they have already been part of in the European Union.” On this island, it was the common EU standards and rules both North and South that allowed for the political curtain to be pulled aside on this island. The border went from being an engraining daily existence for those who live alongside it, to being as gentle a presence as the current of the River Blackwater, that flows between the counties Tyrone and Monaghan.