Romania’s Presidency of the Council of the European Union 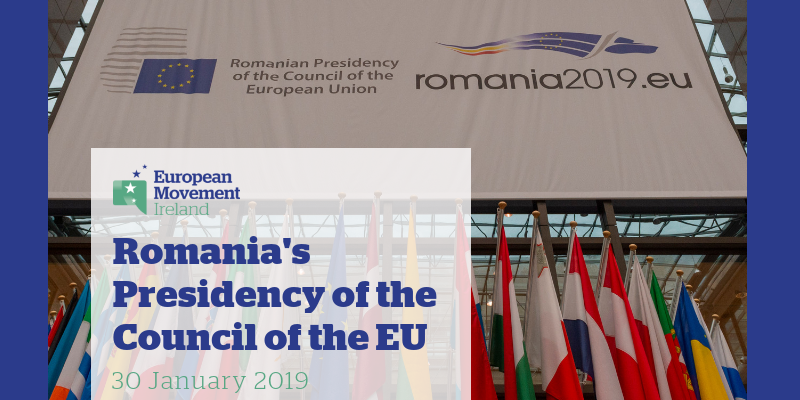 On 1 January, Romania took over the rotating Presidency of the Council of the European Union from Austria, marking the first time Romania has held the Presidency since joining the EU in 2007.  In 2009, the Lisbon Treaty established a system whereby a trio of Member States consecutively hold the Presidency, working together on long-term goals and agreeing on a common agenda over the course of 18 months, with each country preparing its own detailed six-month programme.  The Romanian Presidency is the first phase of this trio, with Finland due to commence the second phase in July. The Presidency trio will be completed by Croatia from January-June 2020.

On Wednesday, 30 January, European Movement Ireland held its 15th Presidency Briefing.  At the event, Romania’s Ambassador to Ireland, H.E. Manuela Breazu, provided an overview of Romania’s priorities for the Presidency of the Council of the EU, which runs from 1 January to 30 June 2019.  Minister of State for European Affairs, Helen McEntee T.D., outlined the focus of Ireland’s current relations with the EU.

The motto of the Romanian Presidency is “Cohesion, a common European value”.  Romania chose this motto to “underline the importance of returning to the key objectives of the Community project”.  The concept of cohesion has a long history in the EU. In short, economic and social cohesion – as defined in the 1986 Single European Act – is about ‘reducing disparities between the various regions’.

In her address, Ambassador Breazu remarked: “The Romanian Presidency’s programme is founded on the belief that any vision for the future must be built around the key principles that have steered the evolution of the European Union so far. These principles have maintained their relevance all along the evolution of the European project and have the potential to serve as a driving force for our common action towards consolidating the Union.”

Minister McEntee welcomed the Romanian Presidency’s priorities and looked forward to working with the Presidency on the challenges ahead.  She commented: “This Presidency comes at a critical juncture for the EU.  Not only will we be focusing on Brexit; but also on the special EU Summit on the 9th May in Romania where EU leaders will meet to discuss the Future of Europe processes that have taken place across the EU over the last 18 months.”

Romania has set out four priorities, within this broader theme of “cohesion”, which it intends to address over the course of the six-month Presidency, these are as follows:

A Europe of Convergence

The Romanian Presidency will also seek to increase “the competitiveness of the European economy”, including by developing entrepreneurship and aiding SMEs.  The Presidency will concentrate on improving innovation and digitisation in the EU’s Single Market, so that “Europe can become a worldwide digital leader and European companies can acquire a global dimension”.  This will be combined with a focus on developing interconnection within the Single Market in the areas of energy, transport, telecommunications and capital markets.

The Romanian Presidency will look to further cooperation between Member States to enhance the security of the EU’s external borders, an important issue for a country which has an EU border with Moldova and Ukraine.  As part of this, the Presidency intends to implement the Schengen evaluation mechanism, as well as “strengthening the EU agencies and structures” operating in the area of security.

The Romanian Presidency has also prioritised developing dialogue among Member States to find solutions for “an effective and sustainable migration and asylum policy”.

A key priority for the Romania Presidency is to focus on “common security and defence policy and the efficiency of EU external action”.  The Presidency will concentrate on strengthening the EU’s security and defence through promoting a stronger EU-NATO partnership, as well as looking to enhance ongoing security initiatives such as the Coordinated Annual Review on Defence, the European Defence Fund and the Permanent Structured Cooperation.

Additionally, the Presidency intends to focus on EU enlargement, especially as 2019 marks the 10th anniversary of the Eastern Partnership.  The Eastern Partnership is an initiative which aims to strengthen EU relations with neighbouring states on its Eastern border, specifically: Armenia, Azerbaijan, Belarus, Georgia, Moldova and Ukraine.  Furthermore, the importance of further cooperation in the Black Sea Region will also be on the Presidency’s agenda.

A Europe of common values

Finally, the Presidency will focus on “stimulating the solidarity and cohesion of the EU”, as part of its “efforts to rebuild citizen’s trust”.  The Presidency intends to promote gender equality, through addressing gender-based discrimination in the labour market and business environment, as well as efforts to tackle the gender pay gap.

The Romanian Presidency has prioritised promoting European common values such as the combating of “racism, intolerance, xenophobia, populism and antisemitism and discouraging] hate speech”.  This will also comprise of efforts to design European mechanisms to tackle online disinformation.